Advertisement
Home / India / I-Day: Indian diaspora in US gears up to celebrate 75 years of independence
Times Square, World Trade Center to be decked up

I-Day: Indian diaspora in US gears up to celebrate 75 years of independence

Largest flag to be unfurled from Times Square, World Trade Center to be lit up in tricolours 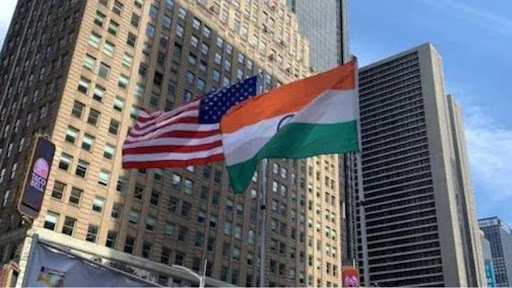 Thousands of Indian-Americans have begun early celebrations to mark the 75th anniversary of India's Independence and the milestone in the country's history.

From iconic Times Square in New York, where the Federation of Indian Associations (FIA) would unfurl the largest ever flag in the Big Apple on Sunday to the US Capitol here and mansions of several governors across the country, India's 75th Independence Day is being celebrated in a big way.

The One World Trade Center, the tallest building in America that stands on the site of the 9/11 terror attacks, and two other popular New York City buildings, will also be lit in colours of the Indian flag on August 15.

"This is a historic moment for all of 1.4 billion people in India and 4.5 million Indian-Americans. To celebrate the occasion, we are unfurling the largest flag on Times Square," Ankur Vaidya, FIA president told PTI.

Several buildings in the US, including the Empire Estate, are being lightened with Indian tri-colour over the weekend, while another group of Indian-Americans are celebrating the 75th Independence Day over a ferry on the Hudson River.

"India in these 75 years has emerged as a mature democracy and a pillar of global peace. This year is special for all of us. The United States has a Vice President who is of Indian origin," said Alok Kumar, an IT entrepreneur from New Jersey.

In a Virginia suburb of Washington DC, hundreds of Indian-Americans are likely to gather to celebrate Independence Day with film star Anupam Kher and live performance by Sukhbir Singh on Sunday.

Top politicians from Maryland and Virginia are likely to attend.

"India's Independence Day is three days away, but Queens is getting the celebration started early with our Independence Day ceremony tonight at 6 pm. Join us as we honour the contributions of the thousands of Indian-Americans call Queens home," said Queens Borough President Donovan Richard.

"Queens would not be the place it is without our thriving Indian-American community," he added.

In Boston, Niren Chaudhary, CEO of Panera Bread will be the Chief Guest at India Day Festival organised by India Association of Greater Boston.

In fact, several hundred independence day celebrations are being organised across the county, with scores of them being attended by Congressmen and State Governors.

The Connecticut Chapter of the Global Organisation of People of Indian Origin (GOPIO-CT) celebrated India's democracy and the unity and diversity of India and Indian Americans, in Stamford on August 8.

In his proclamation Samford Mayor David Martin said that the Indian Independence was marked largely by non-violent resistance and civil disobedience and the Independence Day is celebrated by the Indian Diaspora worldwide.

The proclamation further noted that Stamford city will honour Indian community which is an integral part of city's diversity, success and great future.

The City of Cupertino and Cupertino-Bhubaneswar Sister City Initiative have announced plans to celebrate the 75th Anniversary of India Independence Day on August 17.

The South Asian Engagement Foundation said it is working with The Durst Organisation to light up the One World Trade Center's 408 feet tall and 758-tonne spire as well as its podium in hues of the Indian tricolour on August 15th.

As part of the celebrations, other Durst installations at One Bryant Park and One Five One in mid-town Manhattan will also be lit up in the tricolours.

The lighting would turn on at sunset, New York City time, on August 15th on the spire of One World Trade Center, One Bryant Park and One Five One in mid-town and remain lit until 2:00 AM. Additionally, the Indian tricolour would be visible on the podium of the World Trade Center.

Traditionally, the Empire State Building in New York is lit every year in the Indian tricolours on the occasion of the country's independence day.

Mark Domino of The Durst Organisation, who oversees Spireworks, said in the statement that his company is proud to partner with the South Asian Engagement Foundation as it celebrates India entering its 75th year of Independence.

Rahul Walia, the founding trustee of SAEF, described the event as a historic moment commemorating India's Independence and most importantly the expression of love between the US and India.

"We hope to continue the tradition and enhance the experience for everyone with more imagery on the podium, he said.

The South Asian Engagement Foundation is a non-profit organisation based in New Jersey with a mission to increase leadership potential in Indian-American communities by providing incentives using educational initiatives and civic engagements. Amongst its initiatives, SAEF supports programs like the South Asian Spelling Bee and the Cricket Bee.