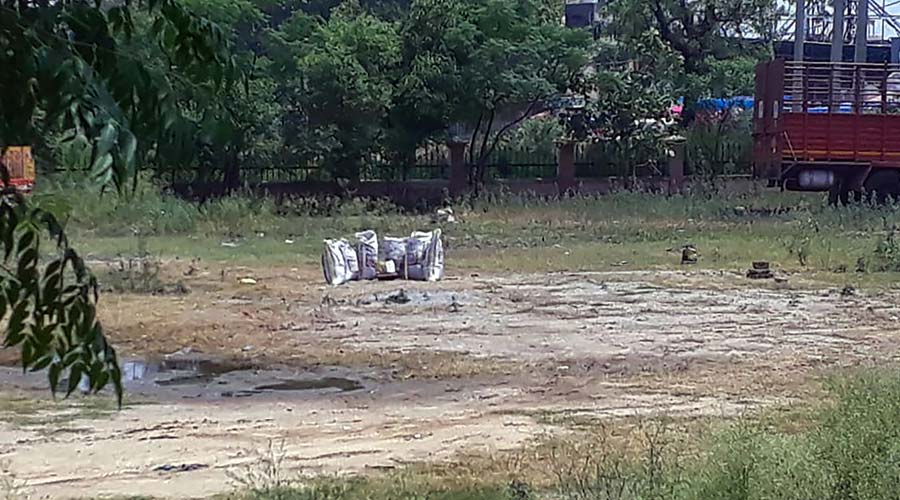 Foiling a major terror plot, four suspected Pakistan-linked terrorists on their way to Telangana to deliver explosives were nabbed in Haryana's Karnal on Thursday and arms, ammunition and IEDs were recovered from their vehicle, senior police officials said.

They were allegedly in touch with a Pakistan-based man who is involved in terror activities and who used to send locations through an app to them to deliver explosives and weapons, Superintendent of Police of Karnal Ganga Ram Punia told reporters.

Director General of Haryana Police P K Agrawal said the four were arrested in a joint operation carried out early morning by police forces of Haryana and Punjab based on intelligence inputs of central agencies.

"In an intelligence-led operation, Punjab Police and Haryana Police arrested four persons today at Karnal with the recovery of 3 IEDs weighing 2.5 kg each and one pistol. Further investigation is on," the Punjab Police said in a tweet.

The four -- all residents of Punjab -- were nabbed near Bastara toll plaza after four vehicles of Haryana Police intercepted them, Inspector General of Police of Karnal Range Satender Kumar Gupta said.

"Three containers each weighing 2.5 kg suspected to contain RDX, a Pakistan-make pistol and 31 live cartridges, besides Rs 1.3 lakh in cash have been seized from the vehicle," Gupta told PTI over phone.

After the vehicle was intercepted in Karnal, a bomb disposal squad and forensic experts reached the spot.

A case under the Unlawful Activities (Prevention) Act, Arms Act and the Explosive Substances Act has been registered.

The Haryana Police has constituted a special investigation team to conduct further probe in the matter.

Punia told reporters that the four -- identified as Bhupinder Singh from village Bhatian in Ludhiana and Gurpreet Singh, Parminder Singh and Amandeep Singh from Vinijoke village in Zira, Ferozepur -- were headed to Adilabad in Telangana to deliver a consignment of explosives.

"They were in touch with a Pakistan-based man Harvinder Singh Rinda, who is involved in terror activities and who used to send locations through an app to them to deliver explosives and weapons. Rinda used to drop weapons and explosives at a pre-designated location in the fields in Ferozepur with the help of drones," he said, adding "we are ascertaining the terrorist outfit with which they were associated".

In the FIR registered on Thursday, Rinda and Rajbir have also been named as accused.

When Gurpreet was in Ludhiana jail, he came in contact with Rajbir. And Rajbir connected him to Rinda. Earlier too, the suspects had delivered explosives at Rinda's behest to various locations told by him, according to the FIR.

"Rinda is involved in terror activities, he supplies arms and drugs and sends location to them and their task is to transport these explosives and arms...," he said.

The four suspects, two of whom are stated to be brothers, were produced before a court in Karnal and remanded to 10-day police custody.

The Punjab Police, in a statement later, said in a well-coordinated operation, they successfully averted a possible terrorist attack by giving a hot chase of over 300 km to the suspects and passing on inputs to their Haryana counterparts about their movement.

Giving details of the incident, Punjab DGP V K Bhawra said that central agencies earlier shared an input that some suspects, who may be carrying explosive material and weapons, are moving in the border districts of Fazilka and Ferozepur.

Subsequent to this input, police teams along with officials from central agencies were on a manhunt on the intervening night of Wednesday and Thursday to nab these suspects, he said in a statement.

The Punjab DGP said that the suspects were found to be moving in the area of Ferozepur and later they started moving towards Ludhiana in a white Innova vehicle bearing Delhi registration number.

"The suspects further took the National Highway and started moving towards Ambala, when acting promptly, Punjab Police shared the development with Haryana Police, which had managed to intercept the vehicle in Karnal and arrest the accused persons with the IEDs, Bhawra said.

"In their preliminary interrogation, accused persons have revealed that they were working for Pakistan-based gangster-turned-terrorist Harwinder Singh alias Rinda. Rinda, a notorious gangster active in Punjab, Chandigarh, Maharashtra and Haryana is a history-sheeter and wanted by the Punjab Police in heinous crimes including murder, contract killing, robbery, extortion and snatching," the DGP said.

Haryana's Additional Director General of Police Sandeep Khirwar said the possibility of more people being involved in the case cannot be ruled out.

When asked if the suspects are related to terror outfit Babbar Khalsa, Khirwar said, "Once facts in this regard come to fore, we will let you know."

Asked where these explosives were intended to be used, Khirwar told PTI, All these things are part of investigations."

Speaking to reporters on the sidelines of an event in Rohtak, Haryana Chief Minister Manohar Lal Khattar said investigation in the case was underway.

Haryana Home Minister Anil Vij told reporters, "Four terrorists were going in the Innova vehicle. We arrested them on the basis of inputs and arms and ammunition have been recovered. Further probe is on."

Asked if the arms and ammunition they were transporting were dropped in the fields in Ferozepur in Punjab using a drone from Pakistan, the Haryana Police chief said earlier in the day, "That is what they have told, but these details we need to verify and establish the veracity of these facts."