Advertisement
Home / India / Congress leaders had to 'get people from Lucknow and Chhattisgarh', says Smriti

Congress leaders had to 'get people from Lucknow and Chhattisgarh', says Smriti 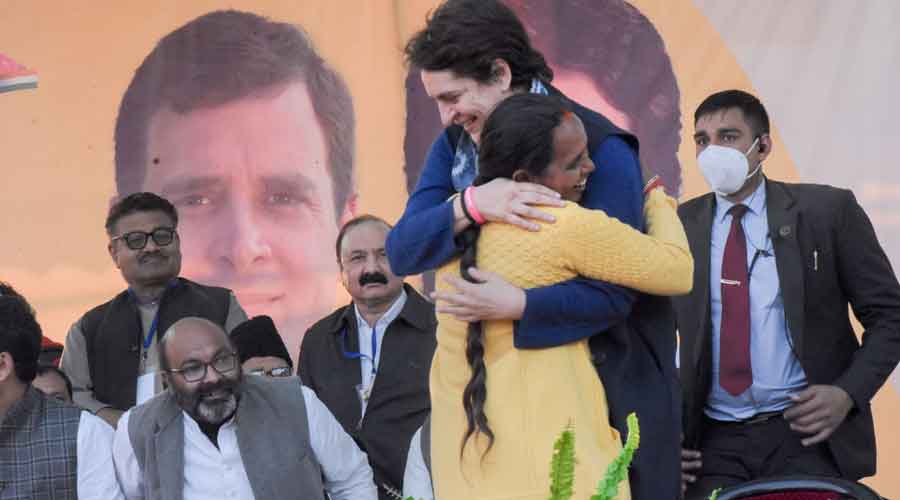 In a jibe at Rahul Gandhi and Priyanka Gandhi Vadra over their foot march in Amethi, Union Minister Smriti Irani on Saturday said the Congress leaders had to "get people from Lucknow and Chhattisgarh" which "speaks volumes about their relationship" with her constituency.

The former Congress president and his sister took out a foot march from Jagdishpur to Harimau village where Rahul Gandhi addressed a public meeting.

They were taking part in the 'Jan Jagran Abhiyan-Bhajapa bhagao, mehengai hatao pratigya padyatra' organised against the policies of the Narendra Modi government.

Rahul Gandhi was a Member of Parliament from Amethi for 15 years. He is visiting the place for the second time after losing the seat, which had been a pocket borough of the Nehru-Gandhi family, by 55,120 votes to BJP's Smriti Irani in the 2019 Lok Sabha elections.

"Today the siblings were in Amethi. They had to amass crowd from Lucknow, Sant Kabir Nagar and Chhattisgarh... someone had to burn a lot of fuel.

"The fact that you (Nehru-Gandhi family) were in a constituency for 50 years and have to drive 50 people from Lucknow to Amethi speaks volumes about them and their relationship with my constituency. That 'yatra' is going nowhere," Irani said when asked about the foot march in Amethi.

Responding to questions about Amethi at the launch of her novel 'Lal Salaam', Irani spoke at length about her association with the constituency.

"Going to Amethi (to contest elections in 2014) was throwing myself to being devoured. I knew that I was opening myself to criticism and there was so much goodwill for that one family in Lutyens Delhi that I would be torn to smithereens," she said.

The Union minister said that in 2014 she had requested her seniors to call up her family and seek their permission about her contesting the Lok Sabha polls from Amethi as this decision would not only impact her but all those who love her.

About contesting from the Amethi constituency in 2014, Irani said that she got only three weeks to fight the election from a seat where the BJP had never got more than 30,000 votes.

"But, in 21 days we polled three lakh votes. Which means there were 2.7 lakh people waiting for somebody to show up. I showed up and it is for them that I stayed back," she said.

Claiming that some people had tried to threaten her then, Irani said it was a turning point for her.

"One evening in Jagdishpur Assembly constituency, four people accosted me, my driver and two party workers. They were trying to give me some very wise advice, that when Sanjay Singh and Ravindra Pratap Singh fought from here then they were shot at and when Maneka Gandhi fought from here, her clothes were torn.

"They told me you too may be shot at. I replied that if that happens then (Narendra) Modi will get 400 seats," she said, adding "It was a revolt against a system that did not function. I just became the 'sutradhar', I just became the weapon."

There are five assembly seats in Amethi parliamentary constituency. Out of these, Amethi, Jagdishpur, Salon, Tiloi are held by the BJP. The Gauriganj seat is with the Samajwadi Party.

The Congress is trying to regain its turf in Amethi and Uttar Pradesh in the upcoming Assembly polls.