They sought directives declaring the presidential orders of August 5 as 'unconstitutional, void and inoperative' 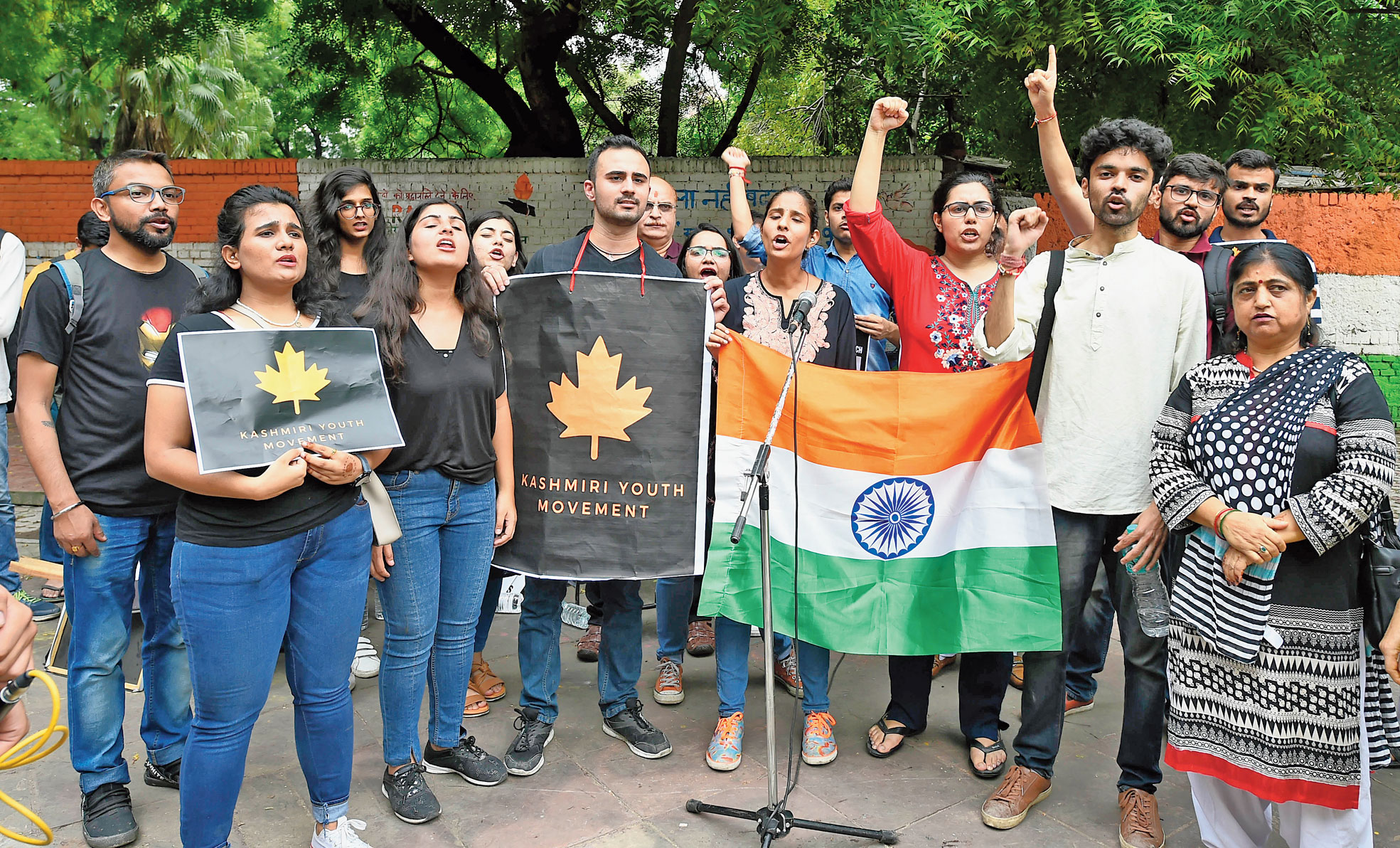 Activists of Kashmiri Youth Movement express solidarity with the government for its decisions on Kashmir. (Prem Singh) An earlier version of the caption was incomplete. It had said “activists of the Kashmiri Youth Movement express solidarity with Kashmir at an event in New Delhi on Sunday”. It gave
the impression that the activists were opposing the Centre. We apologise for the lack of clarity.
PTI   |   New Delhi   |   Published 18.08.19, 08:41 PM

A group of former defence officers and bureaucrats have moved the Supreme Court challenging the presidential orders and the abrogation of key provisions of Article 370, which gave the special status to Jammu and Kashmir.

They sought directives declaring the presidential orders of August 5 as “unconstitutional, void and inoperative”.

The plea said: “The brazen unconstitutionality of the Act is unprecedented. By way of an amendment in Article 367, conditions have been sought to be read into Article 370(3) which has the effect of completely nullifying the effect of Article 370 and abrogating the Constitution of Jammu & Kashmir.”

It added: “The state itself has been dismembered by being downgraded as a Union Territory and part of it being split to form another Union Territory of Ladakh. This has been followed by a completely lock-in, giving no scope to the people of Jammu & Kashmir to have any say in the entire exercise. The above action jeopardises and strikes at the very root of the integration of the erstwhile state of Jammu and Kashmir into India”.

The former defence officers and bureaucrats said the Jammu and Kashmir (reorganization) Act of 2019 should be declared “unconstitutional, void, and inoperative”.

The petitioners have stated that Article 370 shall cease to operate only from such date as the President may, by public notification, declare and this cannot be done under the proviso to Article 370(3) unless there was a recommendation of the Constituent Assembly of the state to do so.

More than half a dozen petitions have been filed in the apex court against the abrogation of the provisions of Article 370 and for lifting of restrictions in Jammu and Kashmir.

On August 16, the apex court had refrained from examining the legal challenges posed to the changes made in the constitutional status of Jammu and Kashmir, saying that the petitions filed on the “serious issue” of the abrogation of the provisions of Article 370 of the Constitution suffer from defects.

The apex court, which was dealing with the first petition filed on August 6, a day after the decision to scrap the key provisions of Article 370 was announced, expressed its anguish that there have been six petitions on the issue and all were filed with the defects.