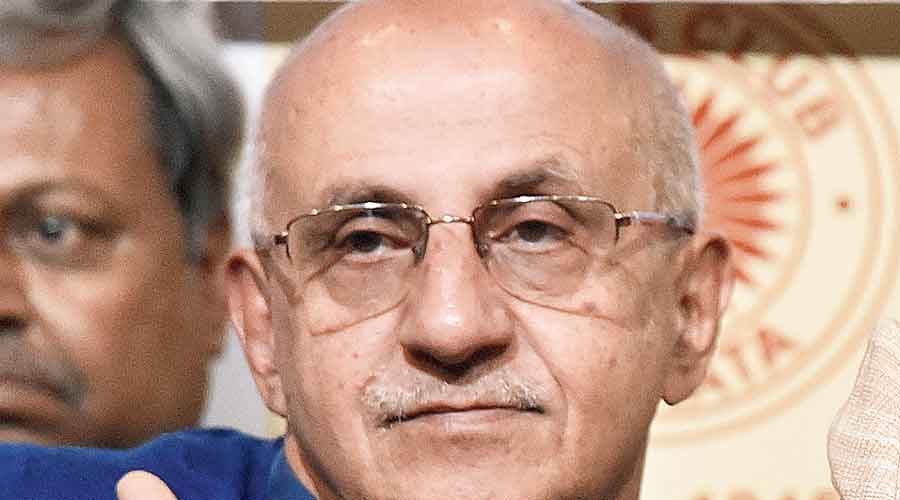 The Enforcement Directorate on Thursday raided premises associated with activist and former IAS officer Harsh Mander, a vocal critic of many of the Narendra Modi government’s policies, prompting academics and rights defenders to allege an attempt to “intimidate and try to silence” every dissenter.

The raids, carried out purportedly in connection with a money-laundering probe, began between 8am and 9am and were continuing past 8pm.

Mander’s home and his office at the Centre for Equity Studies (CES) — a think tank — were raided along with two children’s homes in Mehrauli, South Delhi, with which the CES is associated, ED sources said.

Mander had left for Germany with his wife on Wednesday night to join a nine-month fellowship programme at the Robert Bosch Academy in Berlin.

The ED sources said the raids were conducted on the basis of an FIR registered by Delhi police’s economic offences wing (EOW) in February after the National Commission for the Protection of Child Rights (NCPCR) alleged financial irregularities following inspections of the children’s homes.

However, the Delhi Commission for the Protection of Child Rights had contradicted the apex child rights body’s report in Delhi High Court. Also, the FIR does not name Mander, the agency sources acknowledged.

Mander has been a thorn in the ruling dispensation’s flesh, seeking action against BJP politicians for allegedly inciting the February 2020 Delhi riots and opposing the Citizenship Amendment Act.

Sources said the sleuths arrived at Mander’s Vasant Kunj home at 8am, and at his CSE office around 8.45am. The raids on the children’s homes — Umeed Aman Ghar for boys and Khushi Rainbow Home for girls — began about the same time.

The ED did not issue any official statement on the raids. An ED source said: “The police’s FIR is against the two children’s homes and their parent body, the Centre for Equity Studies, of which Mander is a director. It was based on a report submitted by the NCPCR last year, alleging financial irregularities.”

When the NCPCR raided the two children’s homes last October, Mander has said, its officials sought details of their foreign funding and asked whether the kids at the two homes had participated in the anti-CAA protests, and whether shelter had been given to Rohingya children.

The NCPCR informed Delhi High Court in July that it had recommended action against the two children’s homes after finding irregularities. Mander had then accused the Centre of a political vendetta.

“We had been receiving notices from the EOW since last year and from the ED this year. They were curious why Harsh did not draw a salary and why the CES only functioned from rented premises,” a CES source said.

“We don’t know what they are looking for now. The spate of notices increased after Harsh filed a plea in court this year seeking an FIR against BJP leader Kapil Mishra (for allegedly inciting communal riots last year with a speech).”

When the ED sleuths arrived at the CES office in Adhchini, south Delhi, only the caretaker was present, an office source said.

“They (sleuths) called two senior administrative staff members and have been searching every file in the office,” the source said. “Mr Mander’s home in Vasant Kunj is also being raided. His daughter Suroor (an advocate) has been held inside since morning. We have no contact with her.”

The source said the office had hosted a farewell party for Mander on Wednesday before he and his wife left for Berlin. Mander will do the Richard von Weizsäcker Fellowship on development policy, peace and human rights, and social change in Asia and the Pacific.

The statement issued by over 600 people expressing solidarity with Mander said: “Over the past year, Harsh Mander and the CES have been subjected to continued harassment by multiple state agencies. The false and malicious allegations by the National Commission for the Protection of Child Rights (NCPCR) were definitively countered by the Delhi Commission for the Protection of Child Rights (DCPCR), a statutory body, which has filed a strong affidavit in Delhi High Court, putting an end to the false allegations against the CES.”

“(The) CES has also been subjected to harassment by the economic offences wing (EOW), and the IT department. All these vindictive efforts combined have showed neither diversion of money nor any violation of the law. The current raids by the ED and IT department are to be viewed in this context, as part of a continuing chain of abuse of state institutions to threaten, intimidate and try to silence every critic of the present government.”

Actress Nandita Das tweeted: “Having known him personally and worked with him, I can only say, that this raid says it all. In solidarity with @harsh_mander.”

Having known him personally and worked with him, I can only say, that this raid says it all. In solidarity with @harsh_mander https://t.co/FTbfLDxe3F

Progressive International, a global Leftist organisation, said: “We condemn this attack on PI Council member @harsh_mander. Such raids have been denounced as a common tactic employed by the Indian government to silence progressive voices and critics — a blatant misuse of government authority.”

One day after the International Day of Democracy, Modi Sarkar continues with its FDI obsession—Fear, Deception, Intimidation, by harassing a renowned activist and intellectual, Harsh Mander. And He gives lectures to others on inclusiveness and democracy!https://t.co/HRpwNeYcP9

BSP parliamentarian Danish Ali cited Wednesday’s visit by income-tax officials to premises linked to actor Sonu Sood and tweeted: “The message is very clear... those who are not with us, ED, CBI and other government agencies will ‘take care’ of them.”