The media conference was held hours before cops announced that they had filed the first chargesheet on an FIR in which rights activist Umar Khalid, who was arrested on Sunday night, had been booked under UAPA 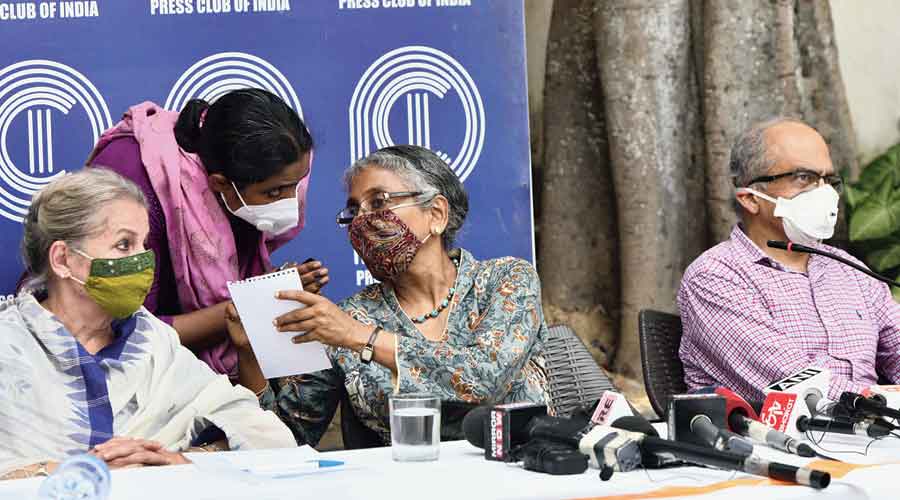 Senior advocate Prashant Bhushan on Wednesday alleged that the police investigation into the Delhi riots was a “criminal conspiracy” to protect the perpetrators and frame the innocent.

Attending a media conference in solidarity with those facing terror charges in connection with the February Delhi riots in which 53 people were killed, Bhushan told reporters at the Press Club of India: “It’s a criminal conspiracy by Delhi police to frame innocent people who were protesting peacefully against an unconstitutional law, and those activists who were supporting these peaceful, exemplary protests. It’s a conspiracy to let off those against whom unimpeachable evidence is available to show their involvement in these riots.”

The media conference was held hours before the police announced that they had filed the first chargesheet on an FIR in which rights activist Umar Khalid, who was arrested on Sunday night, and several student and youth activists as well as former municipal councillors of the Aam Aadmi Party and the Congress, Taahir Hussain and Ishrat Jahan, have been booked under the Unlawful Activities Prevention Act. The 11-volume, 17,000-page chargesheet was submitted in court in a steel trunk.

Khalid’s parents were present at the media conference but did not speak.

His mother Sabiha Khanum wore a facemask with her son’s picture on it with the message “We are all Umar Khalid” written in Hindi.

Several of those present held placards, each bearing the picture of an accused booked under the UAPA with the name suffixed to the writing “We are all”.

They also issued a statement demanding the release of the accused and the arrest of BJP leaders who had made incendiary speeches before the riots.

A video message recorded by Khalid just before his arrest was screened in which he said: “The Delhi police are not arresting the rioters who incited and caused the large-scale communal violence in the capital in February. Instead, it is going after those who criticise the government and its policies, especially the Citizenship Amendment Act. The ones who participated in the anti-Citizenship Amendment Act protests are being wrongly framed without proof.” 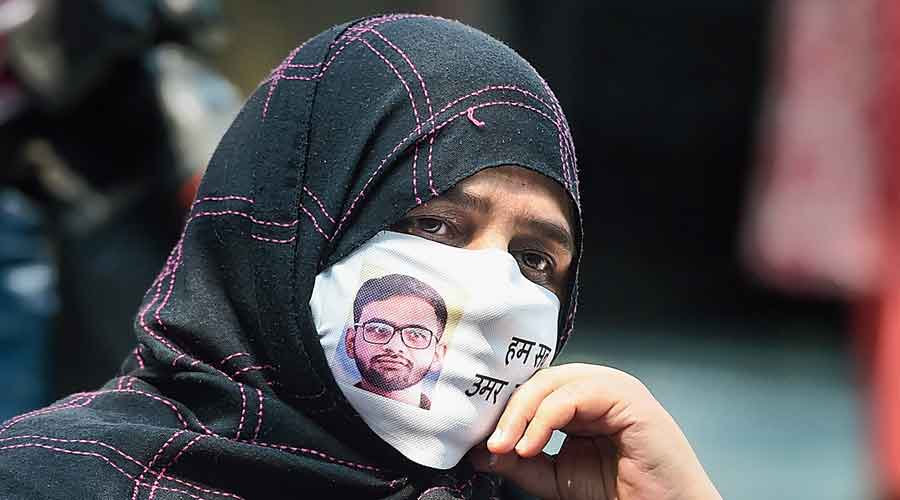 Sabiha, mother of rights activist Umar Khalid who has been arrested in a Delhi riot case, during a media conference at Press Club of India in New Delhi on Wednesday.
PTI

CPI national council member Kanhaiya Kumar, who had been arrested along with Khalid and fellow JNU student Anirban Bhattacharya for sedition in 2016 for which they are yet to face trial, was listed as a speaker at Wednesday’s media conference but he did not turn up, ostensibly because he was stuck in another meeting.

Kanhaiya wrote on Facebook: “The question is why have the BJP leaders who openly instigated the riots not been called for questioning and arrested? Questions being raised on the investigation into the Delhi riots are inevitable as the aim is not to ensure justice but to take political revenge.”

Friends of Khalid said the police’s special cell had allowed books to be given to him in custody. He is currently said to be reading Vikram Seth’s A Suitable Boy.

Artist Shuddhabrata Sengupta has gifted Khalid a copy of Christopher de Bellaigue’s The Islamic Enlightenment: The Struggle Between Faith and Reason, 1798 to Modern Times, which will be handed over to the police through Khalid’s lawyer Trideep Pais.

Former Planning Commission member Syeda Hameed said at the media conference: “The objective of the government is to target Muslims along with other marginalised and deprived sections. The idea is to finish off our composite culture. We’re running at great speed towards a theocratic state. It is up to us to decide what kind of a country we want.”

Several speakers drew comparisons between the Centre’s legal offensive against the anti-CAA activists and the misery of people due to the lockdown. CPIML politburo member Kavita Krishnan referred to the police citing voluminous documents while seeking Khalid’s custody and said: “This government has 11 lakh pages against Umar but not one page on the deaths of migrants. This shows their priority.… Delhi police must introspect whether they want to be remembered as a private army of the powers that be.”