Reviewers wonders about a possible 'conspiracy' between the authors and the police, highlighting how the riot chargesheets mirror the book’s theories 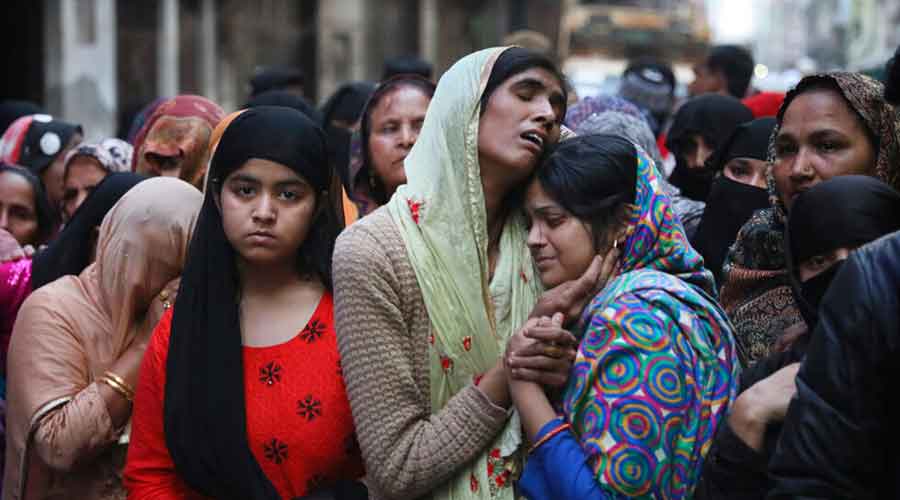 According to the reviewers, the leaked manuscript of Delhi Riots 2020: The Untold Story mentions the expressions “urban Naxal”, “jihadi” and combinations of them a total 115 times while the word “victim” occurs just 16 times
File picture
Pheroze L. Vincent   |   New Delhi   |   Published 22.09.20, 12:53 AM

A group of activists has released a 51-page review of a leaked copy of the manuscript of a book, shelved by Bloomsbury last month, that blames the February riots in Delhi on the protests against the new citizenship matrix.

According to the reviewers, the leaked manuscript of Delhi Riots 2020: The Untold Story mentions the expressions “urban Naxal”, “jihadi” and combinations of them a total 115 times while the word “victim” occurs just 16 times.

The review wonders about a possible “conspiracy” between the authors and the police, highlighting how the riot chargesheets mirror the book’s theories.

Bloomsbury had dropped the book after protests from authors and academics who accused the volume of portraying the riot victims as the perpetrators.

The three authors complained to the Delhi police commissioner earlier this month that Bloomsbury had deliberately leaked a copy of the manuscript and that several people had used it to criticise the unpublished text, which the trio claimed was property stolen from them.

The book — written by lawyer Monika Arora and academics Prerna Malhotra and Sonali Chitalkar — was released online on Sunday, with the same title, by local publisher Garuda Prakashan. American Hindutva commentator Rajiv Malhotra was chief guest at the event.

The review has been published online by a group of NGOs that promote secularism: Karwan-e-Mohabbat led by former bureaucrat Harsh Mander, Act Now for Harmony and Democracy led by Shabnam Hashmi, and the Muslim Women’s Forum, steered by former Planning Commission member Syeda Hameed.

“During a programme on NDTV telecast on 26 August 2020, one of the authors questioned the anchor’s authority asking if he had read the book, and said that reports critical of the book were coming from ‘fake portals’,” the review says.

“We conclude that the authors wanted people to have an informed opinion based on their close reading of the book. What we found is contained in the pages that follow — passages from the book with false claims, factual inaccuracies, and distorted/ selective presentations. As reviewers, we have simply used the yardstick of evidence and fact and lack thereof. There are many statements in this book that amount to libel.”

The review adds: “It is fair to say that in this book, all people who express liberal views and take public positions against the ruling BJP are urban-Naxal. All Muslims — men, women and children — are jihadi. The tale takes a broad sweep, invokes images of ISIS, Syria and Egypt, and quotes from purported Maoist pamphlets about guerrilla warfare.

“PFI” is the Popular Front of India, an extremist Muslim group.

The book appears part of a “conspiracy” between the authors and the police, the review says.

“The theories in this book have been replicated down to details in the chargesheets being filed by the Delhi police in the Delhi riots cases,” it says.

The review follows the same structure as the book, with six chapters, each with a list of falsehoods quoted and rebutted, sometimes with Internet links.

According to the reviewers, the leaked version of the foreword that former Punjab director-general of police P.C. Dogra wrote for the Bloomsbury book, has quotes falsely attributed to India’s first Prime Minister, Jawaharlal Nehru, and Delhi University professor Nandini Sundar.

Dogra was among 26 former DGPs who issued a statement on Friday saying former police officers, including former DGP and ambassador Julio Ribeiro, had “no right to suspect or question the integrity and professionalism of their successors in the Indian Police Service”.

Ribeiro had twice written to Delhi police commissioner S.N. Srivastava, asking whether his officers “have been true to their oath” — an allusion to the allegations of bias in the riot probe — and that “Gandhians have lost favour with this regime!”

In their statement, the 26 former DGPs attributed an incendiary slogan to jailed rights activist Umar Khalid without citing any source.

The review concludes saying: “This purported ‘fact-finding’ amasses imagery and dog whistling to hint at a conspiracy and build image of the ‘global brutal killer Muslim’ without a shred of evidence.”