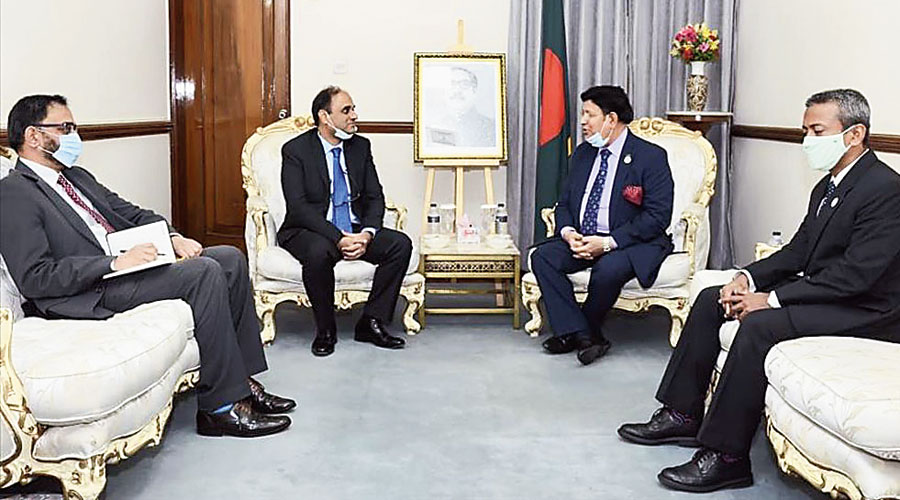 Last week, when the Indian foreign policy establishment was busy handling the aftermath of the face-off with China on the northern frontier, a meeting took place in Dhaka, which sources in both Delhi and the Bangladesh capital think has the potential to change the status quo across India’s eastern border.

Such a meeting would be treated as routine but not when the two countries involved are Pakistan and Bangladesh. The wounds of 1971 and its lead-up are still raw and the two have shared frosty ties since the erstwhile East Pakistan broke away and became an independent nation following a nine-month war in which India stood by the freedom fighters.

“Earlier, Pakistani envoys could meet our senior officers only on a few occasions, where they were summoned to express the country’s displeasure with some development,” recounted a senior journalist.

The Bangladesh foreign ministry did not issue any statement about the meeting. The Pakistan high commissioner shared a photograph on Twitter and told a Turkish news agency that he expected further improvement in bilateral relations between the two countries.

This newspaper could not reach Momen for his comments. But a senior foreign ministry official in Dhaka said over the phone: “It was a courtesy meeting — the Pakistan high commissioner had been pressing for an appointment with the minister for months.”

The meeting comes at a time India is fire-fighting on multiple fronts with China, and smaller neighbours like Nepal and Sri Lanka. Delhi has always counted the Sheikh Hasina-led Bangladesh as a trusted friend.

Over the past few months, Delhi has been watching Dhaka and Beijing warm up to each other. China has allowed duty-free market access to Bangladeshi products, promised funds for infrastructure projects and stepped up medical supplies to Dhaka to fight the Covid-19 outbreak.

“And now, Pakistan is trying to be diplomatically more active in Bangladesh…. Things seem to be changing very fast in Dhaka,” said a source in Delhi.

This January, Siddiqui had filled the high commissioner’s post, which had been lying vacant for more than 20 months because Bangladesh authorities had not approved the nomination of Syedah Saqlain, whom Islamabad had earlier nominated for the post.

Dhaka’s approval of the nomination of Siddiqui, who had earlier served in Bangladesh, was in itself a surprise, a source said.

The relations between Dhaka and Islamabad had hit a low when Bangladesh decided to hang several 1971 war criminals, which Pakistan opposed. The ties worsened further after Bangladesh forced Islamabad to take back three of its officials, including a woman diplomat, alleging links to Islamist militants.

However, a powerful lobby in Bangladesh had always remained loyal to Pakistan, citing the bonds of history and religion.

“This pro-Pakistan lobby has tried to influence the country’s foreign policy and pitched for active bilateral ties with Pakistan instead of with India. It’s sad but the truth is that this lobby has become very active these days,” a source in Dhaka said.

A source in Delhi echoed him, saying the Dhaka meeting assumed importance against the backdrop of the changing political landscape in Bangladesh.

“The existence of the pro-Pakistan lobby was a known fact, but now it has gathered political capital and is capable of effecting a policy change,” the Delhi source said.

Multiple sources in Dhaka and Delhi said the pro-Pakistan lobby -– headed by a businessman who enjoys the trust of Prime Minister Sheikh Hasina and has direct access to her -- has managed to co-opt a segment of the ruling Awami League, which has metamorphosed in recent years with a new generation of leaders.

Barring Hasina, few of the senior Awami League leaders who had played a key role in the country’s freedom struggle are still in the cabinet.

“If things keep acquiring a new shape at such a pace, a lot will change in our country and this will surely have a far-reaching impact on our relationship with India,” said a source in Dhaka.