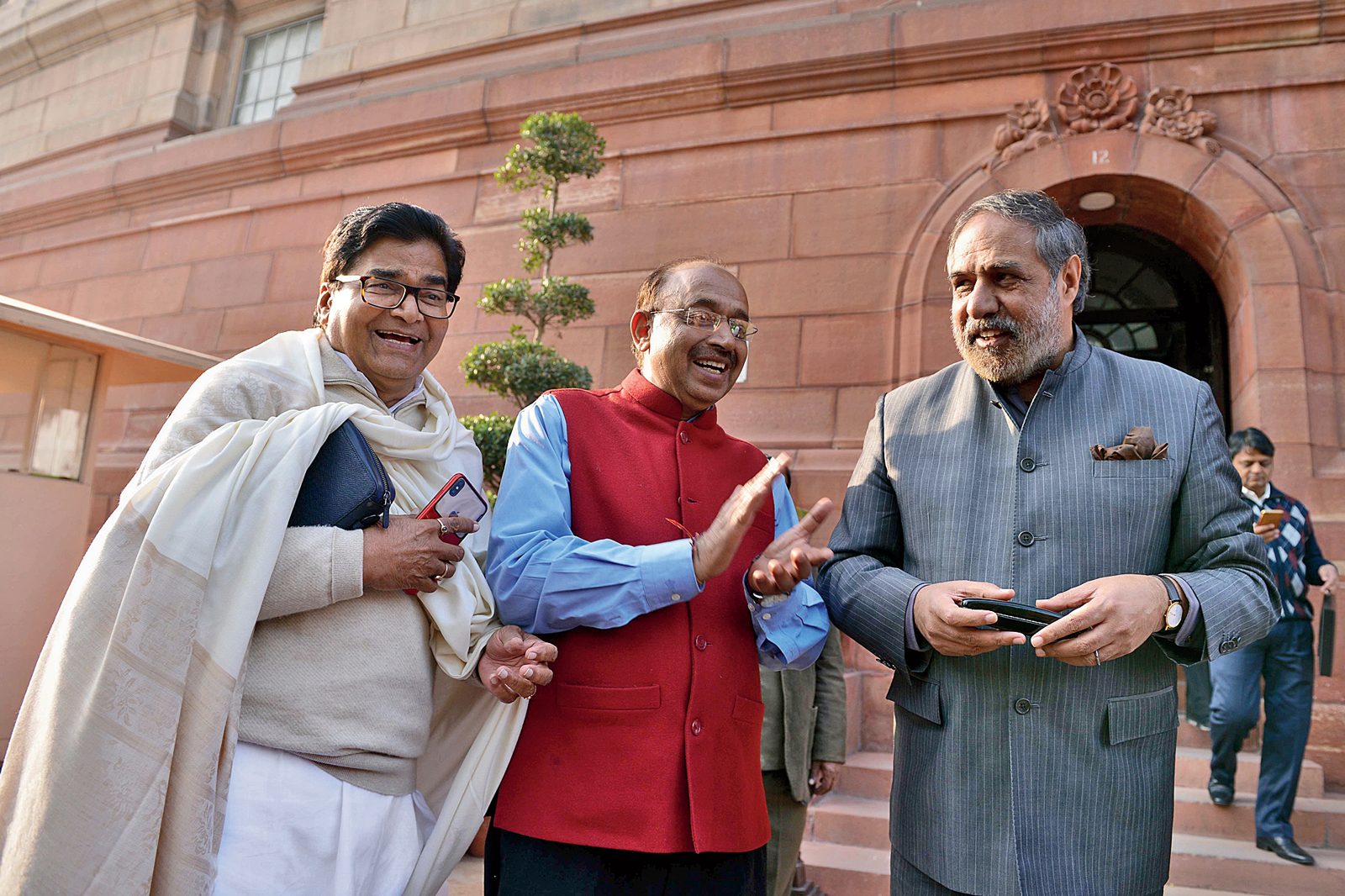 Ramgopal Yadav of the Samajwadi Party, Vijay Goel of the BJP and Anand Sharma of the Congress outside Parliament on Monday.
Picture by Prem Singh
Our Special Correspondent   |   New Delhi   |   Published 31.12.18, 10:14 PM

The government on Monday refused to refer the instant triple talaq bill to a House select committee although nearly every party, including some that have bailed the BJP out in the Rajya Sabha earlier, unanimously called for parliamentary scrutiny of the draft legislation.

In the absence of an agreement, the bill — passed by the Lok Sabha last week — could not be introduced in the Rajya Sabha as the Opposition in one voice demanded that its two notices for referring it to a select committee be taken up.

Deputy chairperson Harivansh wrapped up proceedings for the day after an adjournment to facilitate a behind-the-scenes consultation between floor leaders failed to break the deadlock.

Opposition parties account for 116 MPs in the House of 244, while the BJP’s assured numbers is just a little over 100.

The Opposition, determined to keep up the pressure for a select committee reference, got into a huddle immediately after the House was adjourned to draft a fresh notice and submitted it to the Rajya Sabha secretariat so that it could be raised on Wednesday.

The House is scheduled to meet again after a New Year’s Day break on Tuesday.

The AIADMK and the BJD — which have usually adopted a neutral position in crunch situations — are with the Opposition on this issue.

The AIADMK had also signed on one of the two notices submitted by the Opposition for referring the bill to a select committee on Monday.

In the brief moments that the House functioned through the din raised by AIADMK MPs over a river-water dispute with Karnataka, Opposition MPs pointed out that they were not opposed to the bill but felt that it required parliamentary scrutiny.

“This is an important bill which can impact crores of lives both positively and negatively, and should be scrutinised by a parliamentary panel as has been the practice since 1993,” leader of the Opposition in the House Ghulam Nabi Azad said.

Junior parliamentary affairs minister Vijay Goel accused the Opposition of playing politics and using the select committee reference as a ploy to delay the bill’s passage. “This is a delaying tactic,” he said, adding that the message should go out that the Opposition was indulging in politics over the bill.

That triggered a huge roar of disapproval from practically every quarter of the House except the BJP benches, forcing the Chair to call for a brief adjournment.

When the House met again after a meeting of leaders, law minister Ravi Shankar Prasad said the government was open to suggestions from the Opposition. The bill, he added, should not be kept hanging.

With no meeting ground, the Chair adjourned the House for the day.

Later, Trinamul Congress leader Derek O’Brien told the media the BJP stood practically isolated on the issue with just “two-and-a-half” allies supporting it. “I say two-and-a-half because even the JD(U) has reservations,” he said.

O’Brien said the Chair should have allowed every party leader to state their case in the Rajya Sabha to gather a sense of the House.