Cops lift Ghazipur blockade on one side of NH-9, farmers stay put

The opening of the road stretch would help commuters in Ghaziabad, Delhi and Noida as well as those travelling between the national capital and the interiors of UP 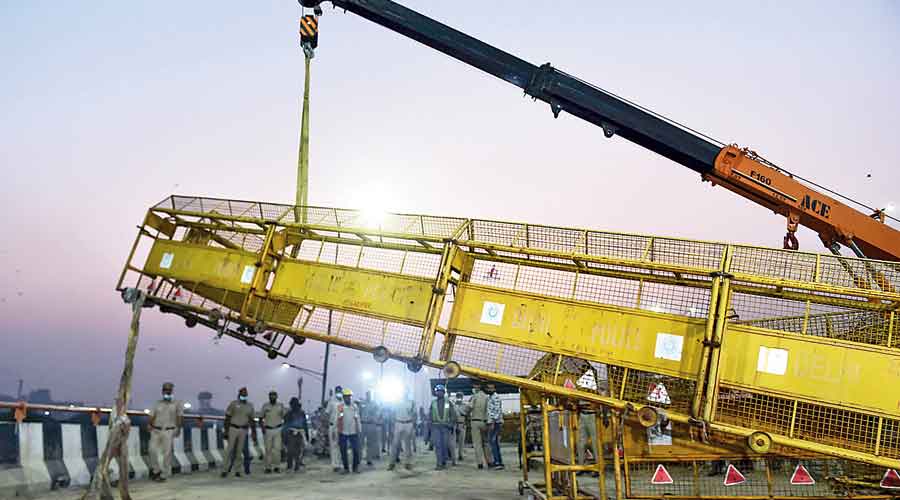 The Delhi Police has removed the blockade put up by it on one of the carriageways of the Delhi-Meerut Expressway, a site of the anti-farm laws protest at Ghazipur on the Delhi-Uttar Pradesh border where scores of protesters continued to stay put on Friday.

The removal of the barriers and concertina wires from the carriageway would help the commuters travelling to Ghaziabad from Delhi, an official said, but it was not confirmed till Friday night if the route was officially opened for traffic.

Multiple layers of iron and cement barricades, and at least five layers of concertina wires were put up by the police last year. The arrangements were further beefed up after the January 26 violence in Delhi during the farmers' protest against three new agriculture laws of the Centre.

Deputy Commissioner of Police (East) Priyanka Kashyap said, "The process of removing the barricades from National Highway 9 has started. The temporary barricading is being removed to ease out vehicular movement. However, National Highway 24 was already open for traffic."

The opening of the road stretch would help thousands of commuters in Ghaziabad, Delhi and Noida as well as those travelling between the national capital and the interiors of Uttar Pradesh, towards Meerut and beyond.

Police officials and labourers were also seen removing the iron nails that were studded on NH-9 at Ghazipur, where hundreds of protesters, mostly members of the Bharatiya Kisan Union (BKU), have been occupying a road stretch since November 2020.

The BKU, a participant in the anti-farm laws movement spearheaded by the Samyukta Kisan Morcha (SKM) -- an umbrella body of over 40 farm unions -- reiterated that the blockade was put up by the police and not the farmers.

BKU leader Rakesh Tikait said the future course of the protest would be chalked out by the SKM.

BKU office-bearers said the farmers want to go to Delhi once the barricades are completely removed and are open to talks with the Centre to resolve the situation.

BKU spokesperson Saurabh Upadhyay said, "If the government wants the logjam to end, it should talk to the farmers now and we are ready for it. But if it wants the farmers' movement to continue, we are determined to prolong it as it has already been 11 months since the protests began."

While the police removed a large portion of the barricades, wirings and iron nails from NH-9 (the Delhi-Meerut Expressway flyover) by the evening, the tents and other temporary structures erected by the protesters continued to remain there.

While one carriageway -- leading from Delhi to Ghaziabad -- was opened in the evening, the other side remained blocked due to the protesters occupying a stretch on it.

Kashyap said the police have removed the barricades on their end and are ready for vehicular movement.

"We have all arrangements in place and we are very much alert and ready. We will respond as the situation develops," the DCP added.

BKU media in-charge Dharmendra Malik said the Delhi Police has "corrected its mistake" of blocking the road after the Supreme Court's order.

"But the protest at the Ghazipur border will continue. The BKU appeals to more farmers to join the movement. Every day a new conspiracy is hatched against the farmers' protest but we are also prepared to tackle it," he said.

The process to remove the barricades started following the October 21 Supreme Court direction, calling for unblocking of the roads that have remained out of bounds for commuters due to the anti-farm laws protests at Delhi's border points of Singhu, Tikri and Ghazipur.

While the protesting farmers have been claiming that the three laws enacted last year are against their interest, the Centre has been maintaining that these legislations are pro-farmer.

Thousands of farmers have been camping at Tikri, Singhu and Ghazipur, protesting against the three contentious laws since November 26, 2020.

According to a senior police officer, some layers of barricades placed by the police at the Tikri border were removed on Thursday night.

The Supreme Court had, on October 21, said the farmers protesting at Delhi's borders have the right to agitate but they cannot block the roads indefinitely.