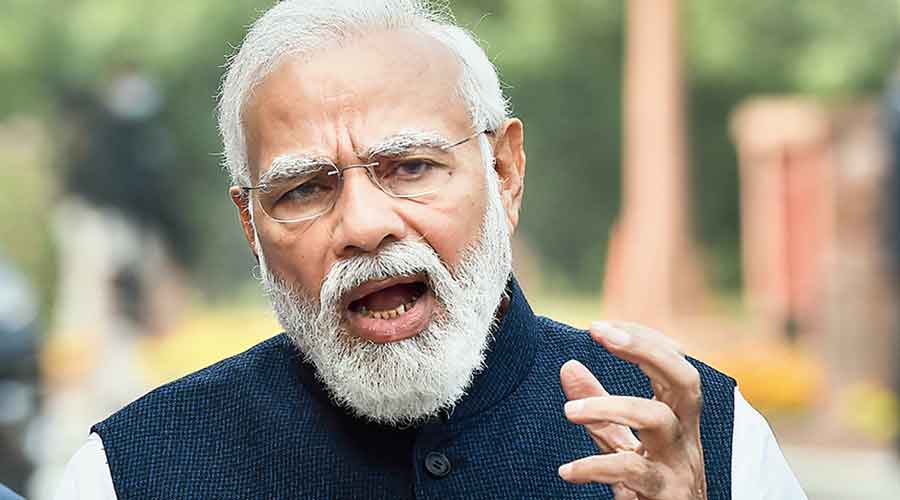 Narendra Modi makes a statement before the media outside Parliament on Monday. The Prime Minister did not take any questions from the journalists.
PTI Photo
Our Bureau   |   New Delhi   |   Published 30.11.21, 02:34 AM

The Narendra Modi government repealed the three contentious farm laws on the first day of the winter session in Parliament amid an uproar, sweeping aside the Opposition’s demand for a discussion with the same highhandedness that marked the laws’ passage last year.

Minutes before the session started on Monday, however, Prime Minister Narendra Modi had told reporters on Parliament’s premises that his government was “ready to discuss all issues, answer all questions”.

Agriculture minister Narendra Singh Tomar pushed the repeal bill first in the Lok Sabha and then in the Rajya Sabha. It was passed by voice vote within minutes in both Houses.

Opposition members had trooped into the Well in either House and demanded a discussion. But the government was in no mood to accept a demand that would have given its opponents a chance to score political points by flagging the Centre’s capitulation before the protesting farmers.

Farm leader Rakesh Tikait with farmers at the Ghazipur border near Delhi after the passage of the bill to repeal the three farm laws.
PTI Photo

The government also feared being cornered on the subject of enacting a law guaranteeing minimum support prices — the most important among the farmers’ remaining demands — if a discussion was allowed.

The three farm laws had been passed in a similar fashion last year — by voice vote in both Houses — with the government rejecting Opposition demands for discussion and scrutiny.

While the government had used its brute majority in the Lok Sabha, the Opposition had protested vehemently in the Rajya Sabha, with eight members getting suspended.

Modi told reporters on Monday morning: “The government is ready to discuss all issues, answer all questions. We want questions in Parliament and also peace. Whatever voices are raised against the government or government policies, the dignity of Parliament and the Speaker's chair should be upheld.”

Modi, who had announced the three laws’ repeal in an address to the nation earlier this month, was in the Lok Sabha for a while but left before the repeal bill’s passage.

Members from Trinamul, DMK and some other Opposition parties were in the Well, seeking a discussion and a law guaranteeing minimum support prices. Congress members too had been with them but had returned after Speaker Om Birla said he would not allow their leader to speak if they were in the Well.

Adhir said the House had in the past discussed many bills before repealing them, so discussions should be allowed. Birla, however, cited the uproar in the House to deny discussion.

The Lok Sabha was adjourned till 2pm, and later for the rest of the day after the repeal bill was passed by voice vote.

In the Rajya Sabha, Tomar said the farm laws had been enacted with good intentions and accused Opposition parties like the Congress of adopting a “double standard” and fuelling the farmers’ agitation.

Leader of the Opposition and Congress member Mallikarjun Kharge argued the government had repealed the laws only because of the BJP’s defeats in by-elections in certain states, and the fear of losing the upcoming Assembly elections in five states.

Earlier in the day, Kharge, John Brittas (CPM), Sanjay Singh (Aam Admi Party) and Binoy Viswam (CPI) had issued notices under Rule 267 for a discussion on the farmers’ demand for an MSP law. Had the Chair accepted the motion, all scheduled business would have been suspended to discuss the matter.

Parliamentary affairs minister Pralhad Joshi told reporters outside the House that the refusal to allow discussions was justified. He chided the Opposition for creating a ruckus.

“The Prime Minister had shown large-heartedness and decided to repeal the laws. The Opposition also wanted repeal of the laws. Despite this, they created a ruckus in the House,” Joshi said.

“We want to know, what is the Opposition’s intention?”