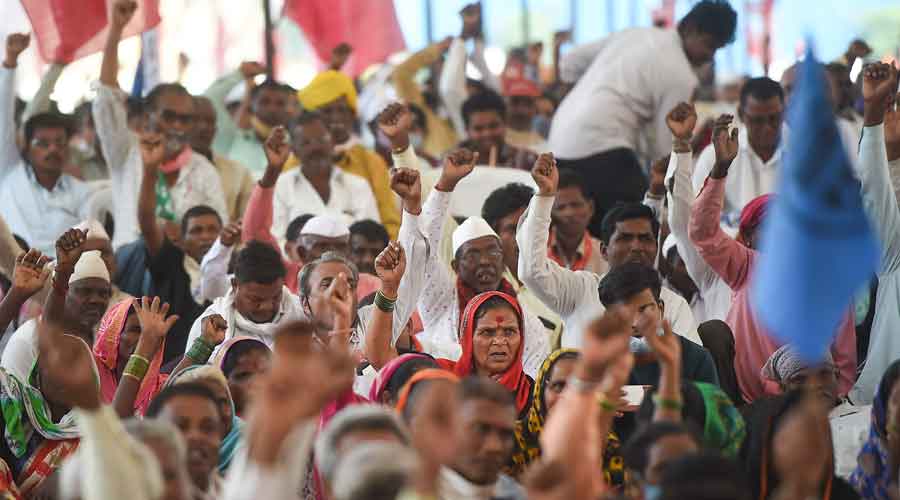 A Kisan Mahapanchayat organised here on Sunday called for the defeat of the BJP in upcoming Assembly and local body elections and vowed to continue the fight for a law guaranteeing a minimum support price for every crop and other demands.

He accused the Modi government of running away from a debate on the subject.

“The Centre should bring in a law guaranteeing MSP. Several issues related to agriculture and labour need attention; we shall travel across the country to highlight them,” he told the rally, held under the banner of the Samyukta Shetkari Kamgar Morcha at Azad Maidan.

Tikait demanded financial aid for the families of farmers who died during the yearlong movement against three contentious farm laws that the Centre has now agreed to repeal.

Peasants, workers, farm labourers, women, youth and students across religions and castes from all over Maharashtra attended the conclave, held on the death anniversary of social reformer Jyotiba Phule, a media release said.

It spelt out several demands apart from the repeal of the three laws and enactment of an MSP law: “…Withdrawal of the Electricity Amendment Bill, removal from the cabinet and arrest of Union minister Ajay Mishra for the Lakhimpur Kheri incident, repeal of the four labour codes, an end to selling off the country through privatisation, etc.”

It added: “It (the Mahapanchayat) will also fight for getting the prices of diesel, petrol, and cooking gas halved. Other demands included doubling the days of work and wages under MGNREGA and extending this scheme to urban areas.”

An SUV belonging to Mishra ran over and killed four farmers and a journalist in Lakhimpur Kheri, Uttar Pradesh, last month, days after the minister had threatened the protesting farmers.

A portion of the ashes of the four farmers killed in the Lakhimpur Kheri atrocity was immersed in the Arabian Sea near the Gateway of India.

Hundreds of farmers and their leaders, including Tikait, joined a 3km procession of urns containing the ashes from Azad Maidan to the Gateway of India.

The urns had been garlanded at Azad Maidan before being placed on a decorated vehicle. Police protection was provided to the procession.

At the Gateway of India, a few farmers climbed into a boat with the urns and immersed them in the middle of the sea amid the chanting of hymns.

The Shaheed Kalash Yatra, which had kicked off from Pune on October 27 and traversed over 30 Maharashtra districts, visited the Shivaji statue, Chaitya Bhoomi of Babasaheb Ambedkar, the memorial to Shaheed Babu Genu and the statue of Mahatma Gandhi on November 27, the release said.

On Sunday, the Yatra visited the Hutatma Chowk, which commemorates 106 martyrs of the Samyukta Maharashtra Movement of the 1950s, sources said.