The LJP leader has been going all out to hail Narendra Modi and Amit Shah while slamming the NDA’s poll face, Nitish Kumar 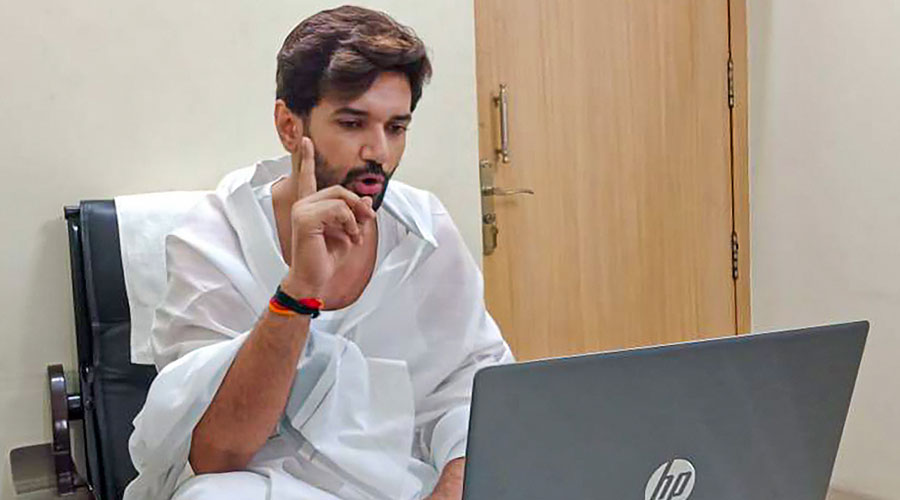 LJP President Chirag Paswan during a meeting with party candidates via video conferencing, ahead of Bihar Assembly Election in New Delhi on Wednesday.
PTI
Our Special Correspondent   |   New Delhi   |   Published 17.10.20, 02:06 AM

The BJP on Friday called the Chirag Paswan-led Lok Janshakti Party a “vote katua (vote-cutter)”and said it had no relations with it, seeking to dispel the growing perception that the BJP was making a covert bid to subjugate ally Nitish Kumar.

Two central leaders of the BJP — Union minister Prakash Javadekar and general secretary Bhupendra Yadav — rushed to clarify that there was no secret deal with the LJP.

“Chirag Paswan has gone his own way in the Bihar elections. The NDA has nothing to do with him. The BJP doesn’t have any B-team,” information and broadcasting minister Javadekar tweeted.

Javadekar put out a video in which he called Chirag’s party nothing but a “vote katua” and said the LJP leader was trying to spread confusion by claiming closeness with senior BJP leaders.

But both Javadekar and Yadav were silent on the fact that the LJP continues to be a part of the NDA at the Centre.

Chirag has been going all out to hail Prime Minister Narendra Modi and Union home minister Amit Shah while slamming the NDA’s poll face, Nitish Kumar. The LJP has been fielding candidates only against the JDU and claiming that a BJP-LJP government would be formed in the state.

“By using the Prime Minister’s name, Chirag Paswan wants to create confusion.… Neither do we have any alliance with the LJP nor is it part of the NDA,” BJP general secretary and the party’s Bihar minder, Yadav, tweeted.

Bihar Assembly elections 2020: Chirag Paswan is a political rookie whom the BJP is allegedly using to fight Nitish Kumar