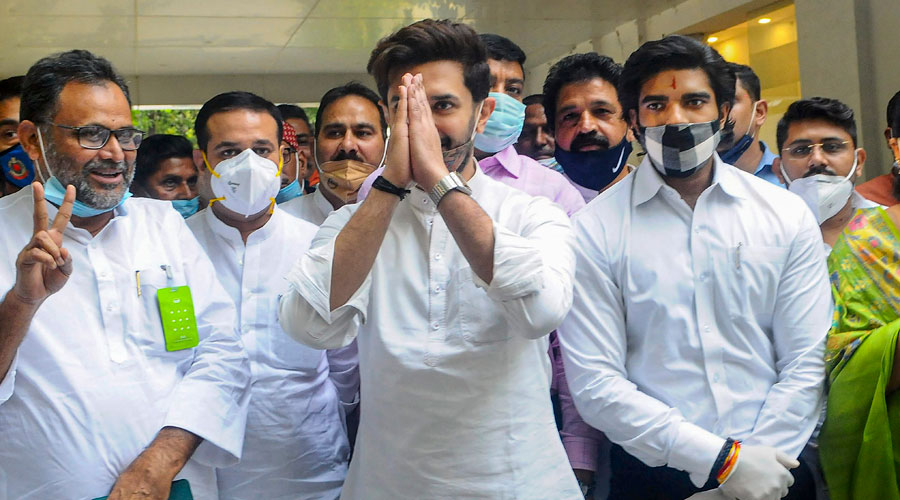 Lok Janshakti Party chief Chirag Paswan along with party leaders after a meeting ahead of Bihar Assembly elections in New Delhi on Sunday.
PTI
Sankarshan Thakur   |   New Delhi   |   Published 09.10.20, 03:44 AM

Those familiar with the serial adventures of Asterix of Gaul would perhaps best be able to visualise the emerging contours of battleground Bihar. Multiple armies converging upon each other in raucous streams with no cognition of ally and adversary, heft or hollowness, as if animated solely by the prospect of an anarchic enactment.

What looked like a humdrum contest between two alliances until last week has overnight been transformed into a shambolic melee that has so blurred the battle-lines that it is tough to tell who’s fighting who. Bihar is headed towards an onomatopoeic crescendo ringing with comic-grade sonics — Piff! Paff! Bong! Aaaargh!!

Raring mid-battlestrip is the exaggeration called Chirag Paswan, a political rookie handed reins of the LJP by his ailing father, the veteran Ram Vilas Paswan, who passed away in a Delhi hospital on Thursday evening.

The young Paswan is clearly punching impossibly above his weight or his party’s. The LJP’s Assembly numbers have been steadily tumbling; from an all-time high of 29, they plummeted to two in the 243-member house in 2015. On such a match-box presence, Chirag has unveiled ambitions of erecting a mansion — the LJP will contest 143 seats, in abject violation of reason and of accepted coalition norms.

But to focus on Chirag’s implausible leap of political pretence — probably buoyed in some measure now by sympathy sentiment — is to lose sight of the launch pad that has shot him towards distances way beyond his horsepower. Chirag’s sudden voracity of appetite and his violations of NDA entente are a thing of the BJP’s encouragement.

Here is an NDA scion swearing war and vengeance upon an NDA chief minister. He has stomped off seat negotiations and pitched LJP war camps in more constituencies than either the BJP or Nitish’s JDU. He has festooned Patna with banners of “BJP se bair nahin, Nitish ka khair nahin… No war with the BJP, but no love lost for Nitish”.

Chirag has tweeted from his official handle an intention to expose wrongdoing behind Nitish’s signature “saat nishchay” welfare programme and punish the guilty after the elections. He has fired off a firman to followers not to cast a single vote for Nitish.

His father was cabinet minister in the Narendra Modi government to the end. Just before Chirag turned ballistic on Nitish and arrogated an extravagant number of Assembly seats to his party, he was in conference with BJP chief J.P. Nadda and Union home minister Amit Shah. It is unlikely Chirag triggered his bellicose revolt against Nitish without sanction from BJP bosses.

Many in Nitish’s JDU are convinced, over the protestations of the BJP, that the part Chirag is playing out is the work of interior designers; but they won’t voice their misgivings, at least yet, for fear of detrimental consequences.

Backstage, though, some misgivings have been unequivocally voiced. Before Nitish appeared at an NDA media conference in Patna a few days ago, he sought repeated guarantees that a clear statement on his leadership would be made publicly by the BJP.

After fair humming and hawing, the job of guarantor fell upon Nitish’s deputy and Bihar BJP leader Sushil Modi, who announced there were “no ifs and buts” that Nitish would continue as chief minister.

Officially, the BJP maintains allegiance to vows it has publicly made on Nitish’s continued chief ministership. It has also “warned” party men not to embrace the LJP and harm the prospects of Nitish’s candidates.

But that warning comes with a pronounced wink. Several BJP leaders and sympathisers have already “left” to join the LJP and accepted poll tickets.

Rajinder Singh, a senior RSS apparatchik who contested the Dinara Assembly seat on a BJP ticket in 2015 and lost, is among them. So is the Nawada district BJP chief, Anil Kumar. So is Dr Ravinder Yadav of Jhajha. This filtration is a proactive work in progress, keep a keen eye: BJP cadres masquerading as LJP candidates are out to undercut Nitish’s nominees and reduce his post-poll tally.

This is the first Assembly election Nitish is contesting in alliance with the BJP since Narendra Modi became Prime Minister. The protocols of partnership have already been altered beyond mere paperwork. Nitish has never conceded the BJP an equal share of seats in the past; this time the BJP has 121 seats to Nitish’s 122. But effectively, the BJP already weighs far heavier on the contest.

Nitish must concede seven seats to Jitan Ram Majhi’s HAM, bringing his own party’s tally down to 115. The BJP, on the other hand, may well negotiate to disguise its generous gift of 11 seats to Mukesh Mallah’s VIP by convincing him that they contest on BJP tickets; that will ensure the BJP is contesting all of its 121 seats.

Besides, and not to be discounted, Paswan’s LJP, a staunch ally openly canvassing for a BJP chief minister, will add to its post-poll tally.

Do not discount either that other burgeoning alliance that now calls itself the Grand Democratic Secular Front. It comprises, among other smaller players, Upendra Kushwaha’s RLSP, Mayawati’s BSP, imported from UP, and Asaduddin Owaisi’s AIMIM.

A large chunk of the seats the BJP has left for Nitish to contest are in Bihar’s Seemanchal region. It is a minority-preponderant belt and Nitish will have to compete tooth and nail with not only the RJD but also Owaisi’s candidates.

But multi-cornered battles are not Seemanchal’s preserve, they are erupting across the state in kaleidoscopic variants, cutting, slashing, tearing in ways hard to tell. If Bihar’s battlefield looks like a madness taking shape, be sure there is a method behind it.