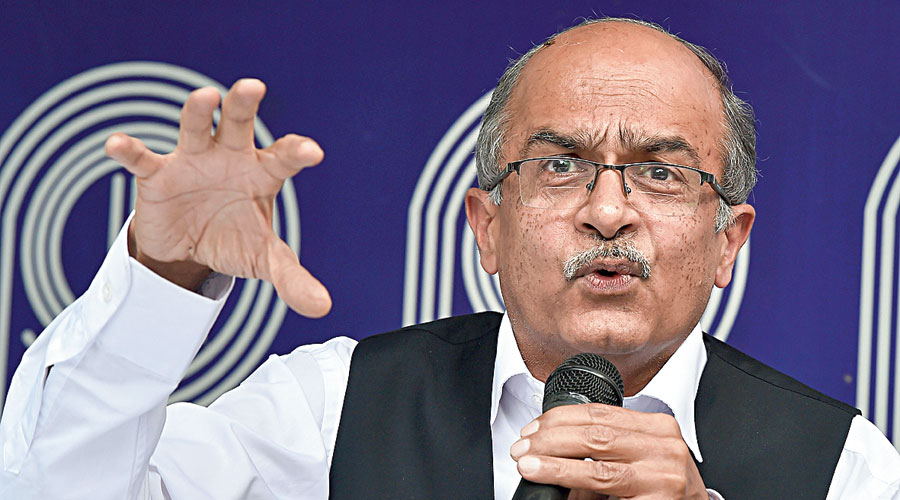 The Supreme Court on Friday convicted advocate Prashant Bhushan of “criminal contempt”, terming two of his tweets on the judiciary “malicious”, “scurrilous” and scandalous and accusing him of an offence that needed dealing with “an iron hand”.

The bench of Justices Arun Mishra, B.R. Gavai and Krishna Murari will pronounce the sentence on August 20 after hearing Bhushan. The maximum punishment for criminal contempt is jail for six months or a fine or both. The minimum fine is Rs 1,000 but there is no upper limit.

One of Bhushan’s tweets had been about Chief Justice of India S.A. Bobde on a Harley-Davidson motorbike and the other had alleged that democracy had been destroyed under the past four CJIs in the last six years “even without a formal Emergency”.

The court said the tweets had eroded public confidence in the judiciary and could not be construed as coming under a citizen’s fundamental right to free speech and expression, guaranteed under Article 19 of the Constitution.

Justice Mishra, who authored the judgment, said: “He (Bhushan) has expressed his opinion that the Supreme Court has played a substantial role in allowing the destruction of democracy and further admitted that (a part of one of the tweets) is regarding the role of the last four Chief Justices in particular in allowing it.”

The court said: “It is common knowledge that the emergency era has been considered as the blackest era in the history of Indian democracy. The impression which the said tweet tends to give to an ordinary citizen is that when the historians in future look back, the impression they will get is that in the last six years democracy has been destroyed in India without even a formal emergency and that the Supreme Court had a particular role in the said destruction and the last four Chief Justices of India had a more particular role in the said destruction.”

The court noted: “There cannot be any manner of doubt that the said tweet is directed against the Supreme Court….

The court said the tweet had reached “millions of people” and “such a huge extent of publication would also be one of the factors that requires to be taken into consideration while considering the question of good faith”.

The court broke down Bhushan’s tweet about Justice Bobde on a Harley-Davidson bike into two parts and interpreted them separately.

Referring to the part where Bhushan had written that the “CJI rides a (Rs) 50 lakh motorcycle belonging to a BJP leader at Raj Bhavan, Nagpur, without a mask or helmet”, the court observed: “This part of the tweet could be said to be a criticism made against the CJI as an individual and not against the CJI as CJI.”

On the part where Bhushan had written that “at a time when he keeps the SC in lockdown mode denying citizens their fundamental rights to access justice”, the court said: “Undisputedly, the said part of the statement criticises the CJI in his capacity as the Chief Justice of India, i.e. the Administrative Head of the judiciary of the country.

“The said tweet is capable of giving an impression to a layman that the CJI is enjoying his ride on a motorbike worth Rs 50 lakh belonging to a BJP leader at a time when he has kept the Supreme Court in lockdown mode denying citizens their fundamental right to access justice.”

The bench said the claim that the Supreme Court was in lockdown was “factually incorrect even to the knowledge of” Bhushan himself.

The bench underlined that the court had not been functioning physically to avoid gatherings during the pandemic, but had been operating via videoconferencing. The court said its benches had sat 879 times online between March 23 and August 4 and heard 12,748 matters.

“Making such wild allegation thereby giving an impression that the CJI is enjoying riding an expensive bike while he keeps the SC in lockdown mode and thereby denying citizens their fundamental right to access justice is undoubtedly false, malicious and scandalous,” the court said.

The bench said the Indian judiciary is not only one of the pillars on which democracy stands but is the central pillar and bedrock of the rule of law.

“The tweet clearly tends to give an impression that the Supreme Court, which is a highest constitutional court in the country, has in the last six years played a vital role in the destruction of the Indian democracy. There is no manner of doubt that the tweet tends to shake the public confidence in the institution of judiciary.”

Justice Mishra said there was no doubt that the court was required to be magnanimous in the face of criticism. However, such magnanimity cannot be stretched to an extent that may amount to weakness in dealing with a malicious, scurrilous, calculated and damaging attack on the very foundation of the judiciary, he added.

“If such an attack is not dealt with with requisite degree of firmness, it may affect the national honour and prestige in the comity of nations. Fearless and impartial courts of justice are the bulwark of a healthy democracy and the confidence in them cannot be permitted to be impaired by malicious attacks upon them,” the court said.