Bengal headed for showdown with Centre over Nadda convoy attack 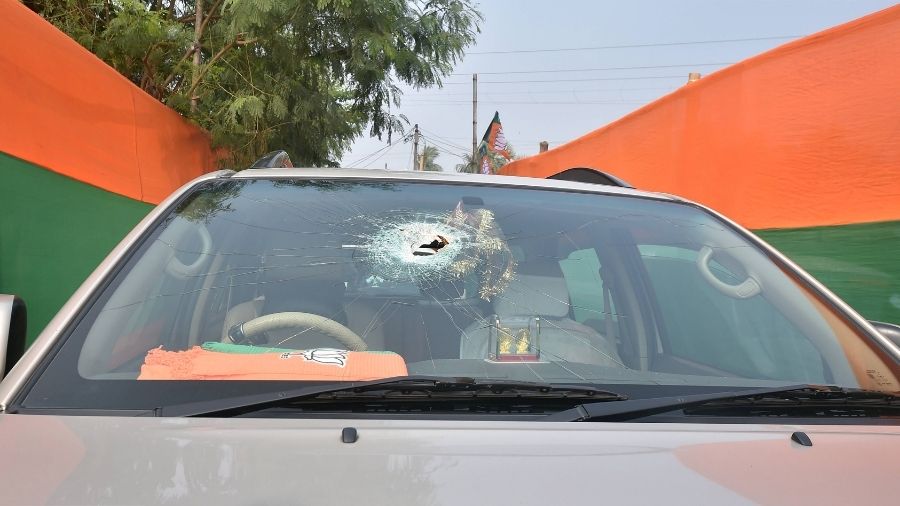 A damaged vehicle of BJP President JP Nadda's convoy, on which stones were hurled on Thursday allegedly by TMC workers, at Sirakal near Diamond Harbour.
PTI
Our Bureau, Agencies   |   Calcutta   |   Published 11.12.20, 07:27 PM

The Bengal government on Friday decided not to send its secretary and police chief to New Delhi in compliance with Union Home Ministry's order following an attack on BJP chief JP Nadda’s convoy a day earlier.

Chief Secretary  Alapan Bandopadhyay wrote to Union Home Secretary Ajay Bhalla, saying he has been directed to request the Centre to “dispense with the presence of the state officials” in a December 14 meeting, indicating that he was acting under orders of the state government.

The Union Home Ministry has summoned Bandopadhyay and DGP Virendra on December 14 for an explanation on the law and order situation in the state, following Governor Jagdeep Dhankar’s report on the attack on Nadda, allegedly by "goons" of the ruling Trinamul Congress.

Dhankhar, who alleged at a press conference in Calcutta that violators of law in Bengal have the protection of police and administration and any resistance by the Opposition is quelled, was asked to submit a report after Nadda's convoy was attacked with stones and bricks in Calcutta's Diamond Harbour on Thursday.

The governor's report following the violence in Diamond Harbour, the Lok Sabha constituency of Banerjee's nephew Abhishek, gives a detailed analysis of the law and order situation in Bengal and the state government's response to political violence and other crimes, the officials said.

In his letter, Bandopadhyay referred to the MHA’s summons to him and the DGP.

“Kindly refer to the letter whereby the Chief Secretary and the Director-General of Police, Government of West Bengal, have been requested to attend a meeting on December 14, 2020, at 12.15 PM in your chamber to discuss the law and order situation in the State of West Bengal, including the incidents regarding certain Z-category protectees,” the chief secretary wrote in his letter.

“While further reports are being obtained and compiled, in the circumstances, I am directed to request you to kindly dispense with the presence of the State officials in the meeting, considering that the State Government is already addressing this issue with utmost seriousness,” the two-page letter read.

Bandopadhyay said that the state government, following the Union Home Secretary’s December 10 direction, had arranged for security cover for the convoy on Thursday.

“The incidents regarding Z-category protectees are already being examined at our end. The West Bengal Police had provided a bulletproof car and a pilot to Shri J.P. Nadda, which was in addition to the escort (vehicle by State, personnel by CRPF) and PSOs (CRPF) he is entitled as a Z- category protectee,” he said.

The DIG (Police) of the range was stationed in the area to supervise the arrangements personally. At the same time, 4 Additional SPS, 8 DySPs, 14 Inspectors, 70 Sls/AS1s, 40 RAF personnel, 259 constables and 350 members of auxiliary forces were deployed on the route and at the venue at Diamond Harbour, the letter read.

“While the central protectees had their own central protection arrangements, these arrangements were made over and above the same from the end of the State,” Bandopadhyay said and requested to be excused from attending the meeting.

Noting that three cases have been registered in connection with Thursday's violence, including two for vandalism, he said, seven persons have already been arrested.

A day earlier in Calcutta, the governor slammed the state government over the deteriorating law and order situation and said the chief minister must desist from repeated remarks calling the BJP a party of outsiders. Such statements, he said, would weaken the national fabric.

“I have sent my report to the Central government, the contents cannot be shared on account of propriety,” Dhankhar told reporters at the press conference in Raj Bhawan.

“The governor will vindicate his oath, come what may,” he asserted.

Dhankhar also alleged that the “non-responsive” stance of the chief minister towards the Raj Bhawan is an indication that governance is not in accordance with the Constitution.

Describing Banerjee's comments on the attack on Nadda's convoy as "most unfortunate", he said, "I take very serious note of the statement that emanated from the honourable chief minister. How can a responsible chief minister, believing in rule of law...Constitution, believing in Bengali culture, talk the way she did."

Banerjee had mockingly distorted Nadda's name at a rally in Kolkata on Thursday and termed the attack on his convoy a "staged act".

Cars of several party leaders, including that of BJP national general secretary Kailash Vijayvargiya and Bengal BJP chief Dilip Ghosh which were part of the convoy, were also damaged in the attack.