Its hallowed origins, its jagged journeys, its consuming embrace, its divided legacy 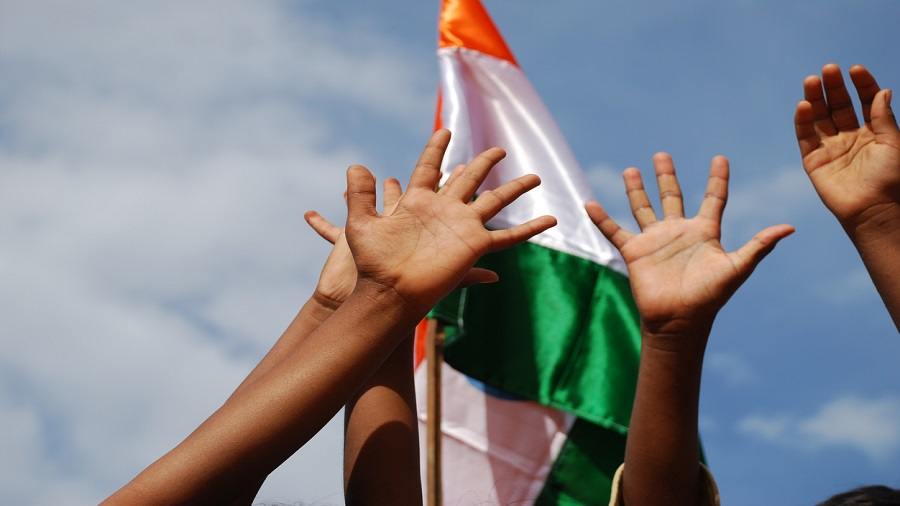 At some point, the verses were turned into a slogan for nationalists and much later, a lethal weapon to destroy communal harmony in the subcontinent, making it a bone of contention between religious conservatives and secularists.
iStock
Prasun Chaudhuri   |   Published 09.08.20, 12:29 AM

The story goes that sick and tired of hearing God Save the Queen at all official events and functions, 19th century writer Bankimchandra Chattopadhyay decided to pen the lyrics of Bande Mataram. Those days Bankim was serving as the deputy collector of Howrah. After attending one such ceremony in his homestead, Kanthalpara, 40 kilometres north of Calcutta, the rationalist and patriot hurried home and composed 12 lines at one go. (The part of the story that concerns the 12 lines is endorsed by Sabyasachi Bhattacharya’s research in his book, Vande Mataram: The Biography of a Song.) They begin — “Sujalam suphalam/Malayaja-sitalam/Sasya-syamala /Mataram/ Bande Mataram...” Bankim had used highly Sanskritised Bengali to describe his mother country in all her splendour. The English translation by Aurobindo Ghose goes, “I bow to thee, Mother,/Richly-watered, richly-fruited,/Cool with the winds of the south,/Dark with the crops of the harvests.”

“That was probably in early 1874,” says Devajit Bandyopadhyay, singer, archivist and music scholar. In his soon-to-be-published book in Bengali, Bande Mataram — Rup Rupantar, he traces the socio-cultural and political underpinnings of the song that became a battle cry in the freedom struggle and, thereafter, part of life in pre-Independence India.

At some point, the verses were turned into a slogan for nationalists and much later, a lethal weapon to destroy communal harmony in the subcontinent, making it a bone of contention between religious conservatives and secularists.

According to Bandyopadhyay, after Bankim’s daughter and some close acquaintances bitterly criticised the heavily Sanskritised verses, Bankim hid the verses in the drawer of his writing table for the next seven years.

They were published in 1881 in Bangadarshan, a literary journal founded and edited by Bankim. The lines sitting in an obscure corner of the page served as a space filler and were barely noticed. But it seems Bankim told a friend who criticised the poem, “You can’t possibly guess now if this is good or bad. But there will be a day when this song will be on the lips of the masses. I shall be dead by then.”

In 1882, Bankim decided to include the verses in Ananda Math with 16 additional lines to suit the tenor of the novel inspired by the Sanyasi Uprising of the late 18th and early 19th centuries. In the foreword to the book The Fakir and Sannyasi Uprisings by Atis K. Dasgupta, historian Barun De writes, “Ananda Math was written about sanyasis leading a photo-jacquerie against arrogant and brutal British subaltern officers.”

Sung by Santan Dal, a band of rebellious Hindu monks in a temple, the new stanzas allude to idol worship. Bankim writes, “Bahute tumi Ma sakti/Hridaye tumi Ma bhakti/ Tomari pratima gai/mandire mandire/ Twam hi Durga dasapraharana-dharini/Kamala kamala dala viharini... In the arm thou art might, O Mother,/ In the heart, O Mother, thou art love and faith,/ It is thy image we raise in every temple./For thou art Durga holding her ten weapons of war,/Kamal at play in the lotuses.” Says historian Chittabrata Palit, “As sanyasis were the central figures of Ananda Math, it is not surprising that they should sing religious hymns seeking freedom at a temple (Bhavani Mandir).

According to Bandyopadhyay, the hymns were first set to tune in Raga Malhar (Qawwali beat) by the legendary musician Pandit Jadunath Bhattacharya of the Bishnupur Gharana. Jadu Bhatta, as he is referred to even now, happened to be Bankim’s music teacher. The song was performed at private recitals in the presence of Bankim quite a few times, notes contemporary scholar Haraprasad Sastri in his diary.

A few years later, Rabindranath Tagore set to music the verses based on Desh ragini. The score was written by Tagore’s niece Pratibha Sundari in the family magazine Balak.

A decade later, Tagore sang the whole song at the Calcutta session of the Indian National Congress with his elder brother Jyotirindranath at the piano. By that time, however, Bankim had passed away.

Bankim died in 1894; in 1883 Ananda Math was staged at the National Theatre, later renamed Minerva Theatre, in Calcutta. The popularity of the song soared thereafter and Bankim was around to witness that.

After Tagore’s recital, it became a tradition to inaugurate Congress sessions with Bande Mataram. In fact, it is still sung at the closing of every session of Parliament. The popularity of the song, however, reached its pinnacle in 1905.

When the British Viceroy Lord Curzon decided to divide Bengal, thousands of people gathered at the Town Hall in Calcutta to protest the resolution; the gathered crowd sang Bande Mataram. It also came to be the chant for those who participated in the Swadeshi movement that was launched in reaction to the partition of Bengal. That year, Tamil poet laureate Subramania Bharati translated it; translations in Marathi, Kannada, Gujarati, Hindi, Telugu and Malayalam were also soon done.

Companies such as H. Bose Cylinder Records, Nicole Records, Pathe and Gramophone Concerto Records brought out records of it sung by various artistes — from Tagore to Satya Bhushan Gupta, from Bhabani Charan Das to Pandit Omkarnath Thakur, from
Kesarbai Kerkar to Hirabai Barodekar. Sushil Kumar Chatterjee, better known as Nakubabu, a 96-year old sound designer and record collector, recalls about 80 different records. “Unquestionably this song ranks among the most popular songs in the history of recording,” he says.

Bandyopadhyay has come across 86 recordings and 144 compositions of the song. There is one Ananda Bazaar & Hindustan Standard (publishers of The Telegraph) record, marked as AHR 1 in 1939. “It was a chorus in Raga Durga composed by Timir Baran. On the other side, the tune was played by an orchestra,” says Nakubabu, who has a copy. Set in the style of a march song, the record, featuring all five stanzas, was played during parades of the Indian National Army or Azad Hind Fauj in Singapore, some claim.

There were other compositions that were never recorded, such as the one composed and sung by Vishnu Digambar Paluskar in Raga Kafi. It was heard only at a few Congress conventions. After his death in 1931, his disciple Omkarnath Thakur carried on the tradition. In fact, it was Omkarnath who sang Bande Mataram in Parliament in 1947.

The immense popularity of the song had irked the British authorities. Indians were banned from singing or chanting Bande Mataram.

Those who disobeyed faced police action, record shops were raided routinely and, if discovered, Bande Mataram records were destroyed.

The song that united many Indians during the Swadeshi movement, however, led to divisions along communal lines in later years. When some political leaders and biplabis  (militant nationalists) suggested the song be made India’s national anthem, some found its imagery and rhetoric unacceptable. They found some verses “idolatrous”. Not just Muslims and Christians, some secularists, communists and atheists also raised objections.

When many Congress leaders, including Subhas Chandra Bose, took the initiative to make Bande Mataram the national anthem, Nehru decided to consult Tagore. Tagore was of the opinion that the last three stanzas had got “accidentally associated” with Ananda Math and were likely to “offend some sects or communities”. Based on this, the Congress Working Committee accepted the first two stanzas of the song as “fit to be sung in national gatherings” but not formally adopted as the national anthem. That was in 1937.

“This decision to compromise was bitterly criticised by many intellectuals, including scientist Jagadish Chandra Bose, Sister Nivedita and Subhas Chandra Bose,” says Bandyopadhyay. “Muslim intellectuals such as Rezaul Karim opposed the move,” he adds. And Gandhi wrote in the weekly newspaper, Harijan, “I would not risk a single quarrel over singing Bande Mataram at a mixed gathering. It will never suffer from disuse. It is enthroned in the hearts of millions.”

Gandhi’s prophecy has been proven correct again and again in independent India. In 1997, when India celebrated her 50th year of Independence, film producer G. Bharat Bala revived the song in Hindi; Maa Tujhe Salaam was composed and sung by A.R. Rahman — Raga Desh Malhar with a strong Western influence.

The most well-known version, however, is the one sung by Lata Mangeshkar in the 1952 film Ananda Math. It was set to tune by Hemant Kumar. It was re-recorded by Mangeshkar in 1996 to modern musical accompaniment. In the later years, other films also used the song. In Shyam Benegal’s Making of the Mahatma, Usha Uthup sings the song in a pop style; it is picturised on Gandhi doing a long march in South Africa. The All India Radio still opens its broadcast every morning with the vocal recital of the song in chorus.

In the meantime, the bickering over its interpretations persist. “The fight over Bande Mataram is a result of a lopsided history projected by fundamentalists of all hues along with secular (mostly Marxist) historians,” says Palit. According to Marxist historians, Bande Mataram was a war cry of Muslim and Hindu ascetics alike fighting imperialists and feudal forces in 18th century Bengal portrayed in the novel Ananda Math.

In 2006, Arjun Singh, the then HRD minister of the Congress-led UPA government, passed a directive asking all schools to ensure students sing the first two stanzas of the song. But after some Muslim clerics objected, the decision was rolled back. In 2018, Bande Mataram made headlines yet again when the then BJP president Amit Shah accused the Congress of initiating the division of the country by dropping the last two stanzas in 1937.

This year, in early July, the Surat Municipal Corporation asked textile workers to sing the song while opening shop. The reason proffered — to foreground their solidarity with the rest of the nation and fight the coronavirus pandemic.