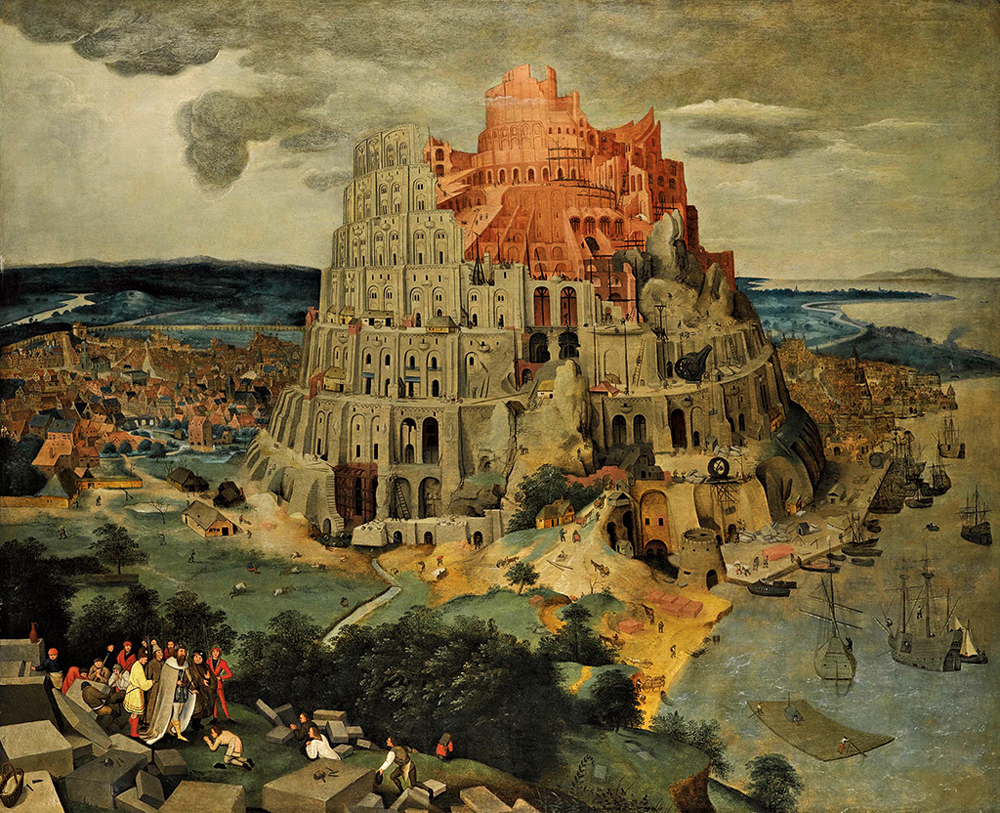 ‘The Tower of Babel’ by Pieter Brueghel. In Narendra Modi’s party, the thought that a song might travel across linguistic and political borders and resonate necessarily seems absurd
(Wikimedia Commons)
Mukul Kesavan   |   Published 25.01.20, 07:01 PM

If I hear “Hum Dekhenge” one more time, I’ll melt my Diwali candle stubs and pour wax into my ears. The thing with anthems is that you bump into them over and over again. Once playback technology was clunky enough to limit the number of times totemic songs were involuntarily heard, but with YouTube funnelled into every phone, those days are long gone. Time was, if I was careful not to tune in to All India Radio early in the morning, I could get through the day without being transported by Vande Mataram; now it’s my cousin’s caller tune.

Republic Day is a good day for thinking about anthemic songs and their peculiar power. A conservative intellectual was recently mystified by Hum Dekhenge’s adoption as the informal anthem of the campaign against the Citizenship (Amendment) Act and the National Register of Citizens. He tweeted that he wanted subtitles because he didn’t understand its Farsified Urdu. That makes two of us. The first time I heard it I thought ‘lazim’ meant ‘we might’ instead of the resounding ‘we inevitably will’ and much of what followed was Persian to me, but I Googled a translation and all was well. If you’re a Hindi speaker as I am, it’s a matter of decoding the Farsi nuggets — lauh-e-azal, koh-e-garan — and then the common verb forms that Hindi and Urdu share take care of the rest. But I did need a translation, or subtitles.

Hindi speakers like me constitute a plurality of all Indians. Of all the songs designated as ‘national’, the one that’s most likely to be understood by us is, ironically, “Saare jahan se achcha Hindostan hamara” by Muhammad Iqbal. It’s not a favourite of mine because even allowing that it was written as a kind of anthem, its plain vanilla patriotism can sometimes grate on adult ears, but I can remember singing it with swelling pride and a quavering treble in school assemblies and parades. Iqbal famously went on to pioneer the idea of Pakistan, but writers can’t control the fate of the words they publish and so “Saare jahan se achcha Hindostan hamara” keeps stoking ‘India first’ feelings, despite the subsequent political sympathies of its author.

The most revealing line in the tweet was, “I don’t think knowing it [Urdu] constitutes cosmopolitan enlightenment.” Now there is a cohort of Track II, border-straddling intellectuals who see Urdu as a shortcut to cultivation and they can be irritating. But they belong to a generation that is rapidly dying out, and can’t be the target of this plaintive objection, given that the campaign against the citizenship law is overwhelmingly made up of young people.

Amongst right-wing populists the world over, ‘cosmopolitan’ is a swear word, generally preceded by ‘rootless’. But here ‘cosmopolitan enlightenment’ is used as a compliment withheld from Hum Dekhenge lovers and their campaign. One possible explanation might be that the writer sees an anti-authoritarian song by the avowedly leftist Faiz as a failed message in an alien idiom. That, though, doesn’t seem to square with the song’s reach and spread in India. The simpler explanation is that to this hostile critic the song’s popularity is a form of posturing, not understanding. The idea that an anti-authoritarian song written in Urdu by a Pakistani Muslim can become an emblem of dissent for Indians who aren’t, well, Pakistani or Muslim or literate in Urdu, is, to the majoritarian mind, counter-intuitive. It has to be an affectation, a pan-Indian virus, a kind of ’flu.

There used to be a time when Delhi’s Jan Sangh leaders would cheerfully acknowledge Urdu shairi as a hobby. Many of them were Punjabis from West Pakistan who had been forced to migrate to Delhi after Partition and they were happy to flaunt their cultural capital even though it contradicted their party’s motto: “Hindi, Hindu, Hindustan”. With time, as this generation passed and sarkari Hindi became the educational norm, this cultural inconsistency became extinct. In Narendra Modi’s party, the thought that a song might travel across linguistic and political borders and resonate necessarily seems absurd.

To a degree that we don’t appreciate, majoritarianism the world over is premised on the ideological refusal of empathy. This shouldn’t be surprising: Bolsonaro, Duterte, Rajapaksa, Orbán, Modi and their parties all claim to speak for an injured majority defined by its real or imagined homogeneity. The idea that Indians should empathize with the plight of persecuted Muslims in neighbouring countries in the same way as they do with persecuted Sikhs or Hindus, genuinely baffles the majoritarian mind. Any example of cultural cosmopolitanism, say a young woman in the Indian Institute of Science in Bangalore, leading a singalong of Hum Dekhenge, translating bits of it as she goes, must, from this point of view, be a kind of pretence.

While Faiz’s Urdu is particularly threatening, even the idea of a fraternal equality of languages, with Hindi perhaps the first amongst equals, troubles the majoritarian State. This is one of the reasons why Modi’s government constantly champions Hindi. The idea of a nation state and a public culture defined by a real linguistic pluralism, where writers like Tagore and Bankim and Sarat Chandra and Premchand and Subramania Bharati and Vijay Tendulkar and Girish Karnad achieve all-India readerships via translation makes majoritarians anxious. Coequal Indian languages are a kind of Babel that threatens the political coherence they crave: for them, the nation state is always lost in translation.

This is, I should point out, an ideological position. Narendra Modi speaks Hindi with a polemical mastery that many native speakers would envy and many right-wing Indians are comfortably multilingual. Bombay’s film industry found pan-Indian success using a lingua franca that owed as much if not more to Urdu, Faiz’s language, as it did to Hindi. But despite the reality of our obviously polyglot world, majoritarians would remake India in the image of a ‘national’ language because real unity for them is achieved through cultural hegemony, not fraternity or empathy.

Most Indians, as our critic observes, don’t speak Urdu. This observation could be expanded into a Twitter thread by simply replacing Urdu with the name of any Indian language that you fancy. Even Hindi; just over forty per cent of all Indians are native Hindi speakers. And many of those Hindi speakers can, with a little effort, hum along to Hum Dekhenge. If Faiz’s anthem does nothing but illustrate the possibilities of empathy and translation in this wonderfully various country, it will have justified its existence and its ubiquity.

Heard at Shaheen: Fearful no more