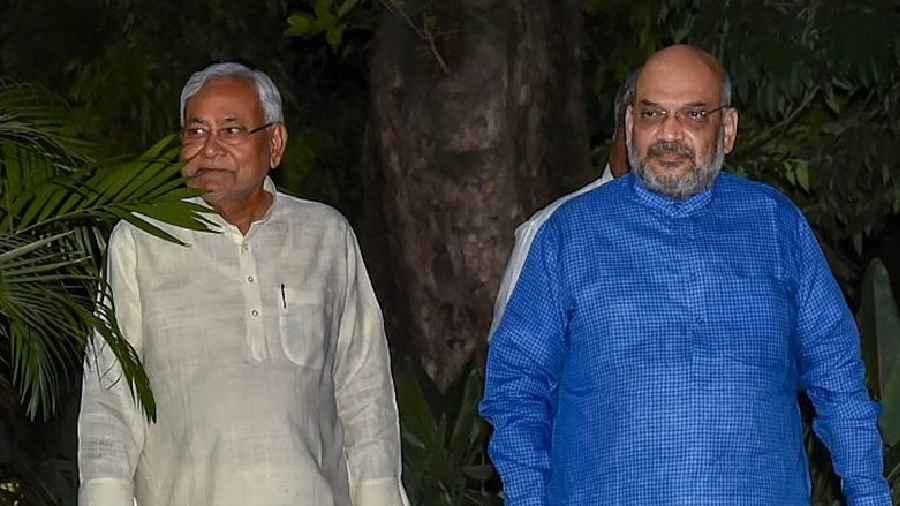 In a closed-door meeting with Bihar BJP core group members on Tuesday, Shah said the Janata Dal (United) leader had spoken to him on his party's representation in the Cabinet ahead of its expansion in July last year.

As Singh, who was then JD(U) president, was keen on joining the Modi government, Kumar told Shah that he can be included, party sources said, sharing Shah's comments on the issue in the meeting.

The home minister also noted that Kumar wanted two members of his party to be inducted in the Union Cabinet but backed Singh's induction in case only one party member being given the berth, sources added.

After snapping ties with the BJP, Kumar had claimed that the induction of Singh, his close aide for a long time before their recent fallout, in the Union government was not approved by him.

To its demand for more ministerial berths, the BJP had then conveyed to the JD(U) that it can't give more than one ministerial position to it, noting that the Shiv Sena was also given only one berth.

The Sena had won more Lok Sabha seats than the JD(U) in the 2019 Lok Sabha polls.

The Sena snapped ties with the BJP in 2020 while the JD(U) quit the ruling alliance last week.

Bihar BJP leaders were told by the central leadership at the Tuesday meeting to take on the JD(U)-RJD government aggressively as a target of winning 35 of 40 Lok Sabha seats in the 2024 polls was set.

Noting that the school education system in Bihar needs a complete overhaul, Education Minister Chandrashekhar on Wednesday said his government will send a team to Delhi and other states to study their education models.

A day after taking over as the new education minister of Bihar, Chandrashekhar said the large number of vacancies in government schools and lack of proper performance evaluation systems are the main reasons for which the state's students are suffering.

"I personally feel that the existing school education system in the state must be changed. It needs a complete overhaul. Since I am a professor, I can easily find out those areas where drastic changes are required," he told reporters.

"I have started interacting with government teachers and officials of the department. The large number of teacher vacancies in government schools and lack of performance evaluation systems are the main reasons for which the state's students are suffering. These issues will be examined at length and people will witness drastic changes," he added.

Student-friendly and result-oriented education models followed by certain states, including the Delhi government, will be analysed before bringing in changes in the existing system, he said.

"People are praising the Arvind Kejriwal government's education model in the national capital. We will send our officials to study the successful school education system in certain states, including Delhi," said Chandrashekhar, an RJD MLA.

All vacant posts in schools and colleges will be filled, he said.

"Our Mahagathbandhan government is Bihar is committed to provide the best education to the students of the state," he said.