A giant of a commitment if you want this giant 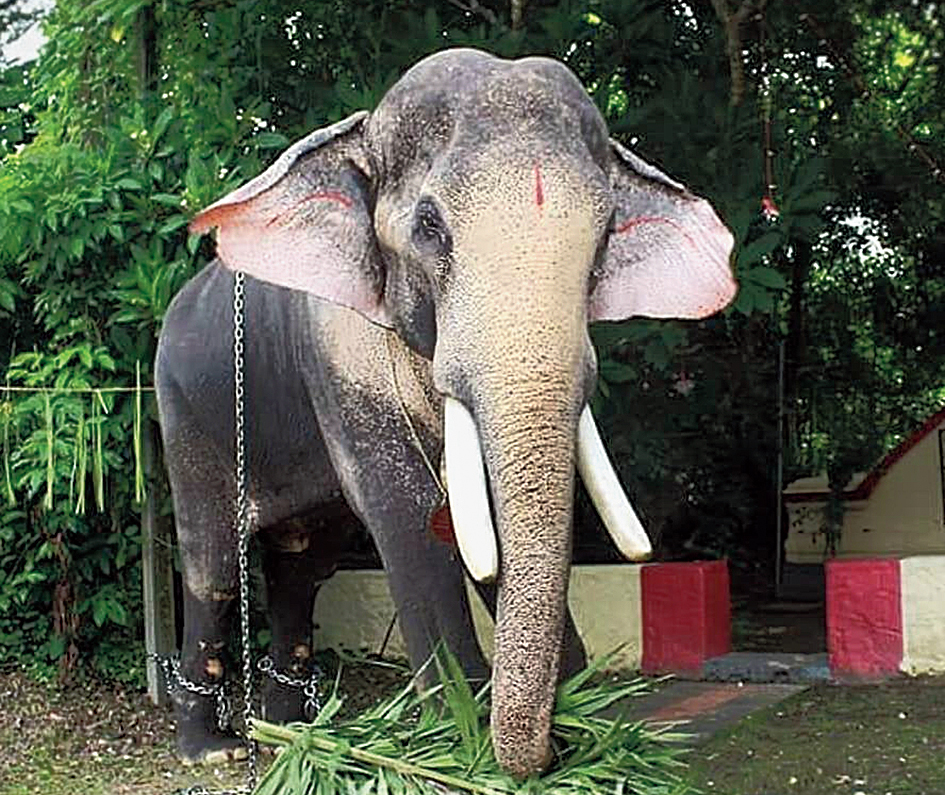 No one with a Facebook page is possibly taller than Ramachandran in India. Having lost one eye to abusive guardians, he is not particularly fond of people straying close to his blind side and has killed 13 people who did so.

Imagine such a hulk being assigned to throw open Kerala’s mother of all festivals, which teems with lakhs of people in the height of summer amid the thunderous crescendo of a percussion ensemble.

Thechikottukavu Ramachandran, a 54-year-old elephant whose popularity has defied his terrifying reputation, has now been allowed in principle to be used in the Thrissur Pooram, the spectacular temple festival that towers over others because of the presence of around 80 caparisoned elephants, the percussion treat and fireworks. The final decision will be taken after a medical examination on Saturday.

Ramachandran, the star attraction, usually kicks off the festival by pushing open a giant door at the Vadakkumnathan (Lord Shiva) temple in Thrissur, the cultural capital of Kerala, and then picks his way through the multitude of worshippers and spectators.

However, on Wednesday, Thrissur collector T.V. Anupama banned the use of Ramachandran at the festival on May 13 on the basis of a report from wildlife officials who recommended that the behemoth be rested because of his unpredictable behaviour that has already resulted in the death of 13 people, including six mahouts. Although the elephant has killed people at other festivals, none has ever been affected at Thrissur Pooram.

Losing his left eye to the cruelty of some mahouts, Ramachandran gets agitated by movement on his left.

The ban triggered a backlash. Standing at 10.5 feet, Ramachandran is the country’s tallest elephant and has a Facebook page that is followed by over 16,000 people.

The influential Kerala Elephant Owners’ Federation vowed to stop all elephants from participating in the festival — an unthinkable eventuality because elephants are to the festival what Lionel Messi is to European football or Virat Kohli to World Cup cricket.

A large number of foreign tourists too flock to see the spectacle.

The elephant’s fans started a “Save Ramachandran” campaign on Facebook. Captured and tamed in Bihar, the elephant had originally been named Moti Prasad. An elephant contractor bought it and brought it to Kerala in 1982.

The festival dispute eventually reached Kerala High Court, which refused to intervene citing its lack of expertise in the matter.On Friday, advocate-general C.P. Sudhakara Prasad gave a legal opinion allowing the elephant to be used with conditions. The CPM-led state government, which had run into another backlash for implementing a Supreme Court order that allowed women of all ages into the Sabarimala temple, accepted the recommendation.

One of the conditions is that the temple that owns Ramachandran will be held responsible for any untoward incident involving the tusker. He will be used only for the main ritual, where its presence has been demanded by devotees, elephant owners and the temple governing body. The usual stroll through the throng will not be allowed this time.

After revoking the collector’s ban, the advocate-general urged the temple authorities to ensure that people are kept away from Ramachandran.

The advocate-general ordered that a written undertaking be taken from the Peramangalam Thechikottukavu temple, which owns the elephant, mentioning that it would be responsible for any trouble involving Ramachandran.

With the government defusing the situation, the federation welcomed the decision. Federation general secretary P. Sasikumar told The Telegraph: “As ordered, we will be using Ramachandran only for the opening ritual. All precautions will be taken to ensure the event passes off without any incident.”

The federation also revoked the decision to stop the other elephants from taking part in the Pooram.