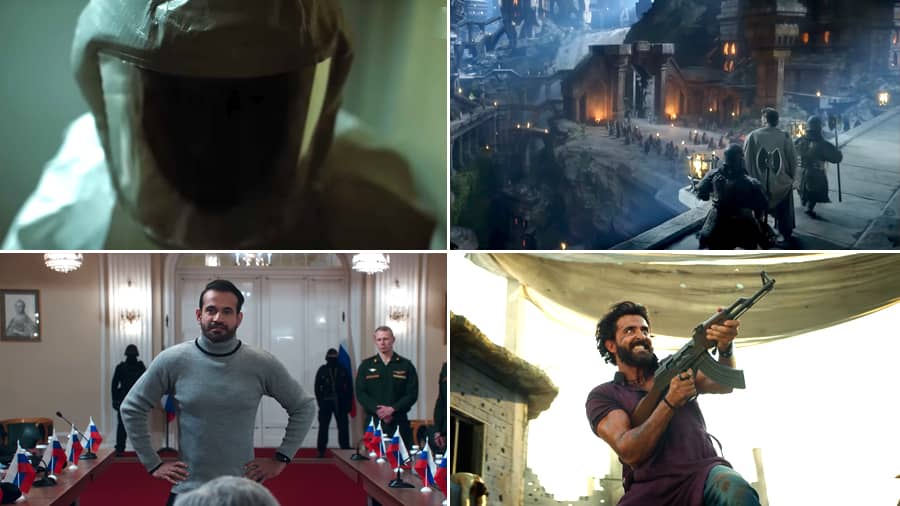 The one-minute-54-second-long teaser shows Vedha’s (Hrithik) dark past in the dungeons of the underworld and also gives us a sneak peek at his relationship with his brother (played by Rohit Sharaf). The teaser also shows us Vikram’s (Saif) hectic life as a law enforcement officer and his personal life.

Vikram Vedha will arrive in cinemas globally on September 30.

The Lord of the Rings: The Rings of Power

Amazon Prime Video has shared a new trailer of their much touted The Lord of the Rings’ prequel, The Rings of Power. Based on the works of JRR Tolkien, the upcoming series is an adaptation of his fabled Second Age of Middle-Earth.

The new two-minute-36-second-long trailer opens with an epic battle scene and follows the journey of Galadriel (Morfydd Clark), the Lady of the woods of Lothlórien, as she steps onto a boat. Then it gives us a glimpse of the other key characters from the series. It heavily focuses on Galadriel’s warring quests, as she narrates her journey through voiceover.

The first two episodes of Lord Of The Rings: The Rings Of Power will be released on Amazon Prime on September 2. New episodes will be made available weekly after that.

On Wednesday, Netflix announced the release date of their animated series Big Mouth. The announcement came in the form of a short teaser video shared by the streaming giants.

The short 45-second-long video features Hormone monsters — Maurice (voiced by Nick Kroll) and Connie (voiced by Maya Rudolph). It hilariously picks up from the ending of the Human Resources spinoff series in the Big Mouth universe, which is a workplace comedy about the world of monsters that personify human feelings.

Season 6 of Big Mouth will premiere on October 28.

The one-minute-51-second-long trailer introduces Vikram’s character as Cobra, a genius mathematician, who will be seen doing all the crimes using his intelligence. The thespian will sport seven different looks in the film, which also features Srinidhi Shetty, K.S. Ravikumar, Roshan Mathew, Anandraj, Robo Shankar, Mia George, Mirnalini Ravi, Meenakshi Govindrajan, and others.

Cobra will hit the big screens on August 31.

Written, directed and produced by Perry, this period drama tells the tale of forbidden love. The two-minute-33-second-long trailer follows the journey of two star-crossed lovers, Bayou (Boone) and Leanne (Pfeiffer), as they navigate the world during the 1940s and the decades that follow. The film also features an ensemble cast of Amirah Vann, Austin Scott, Milauna Jemai Jackson, Brent Antonello, Brad Benedict, Kario Marcel, Lana Young and Ryan Eggold.

A jAzzman’s Blues will premiere at the Toronto International Film Festival (TIFF) and then will be streaming on Netflix from September 23.

Netflix shared the official trailer of their upcoming documentary, The Anthrax Attacks, which will explore 2001’s terrifying anthrax letter crisis that shook the US. Directed by Emmy nominee Dan Krauss, the documentary chronicles the anthrax attacks and the investigation that follows.

The one-minute-39-second-long trailer serves as a timeline of sorts for the attacks and how they were perceived. At the time, many feared it was a follow-up to the September 11 bombings. Five people were killed and 17 more fell ill in one of the worst biological attacks in American history. However, it was discovered as an act of domestic terrorism and the hunt for Anthrax killers became FBI’s biggest task.

The Anthrax Attacks will drop on Netflix on September 8.