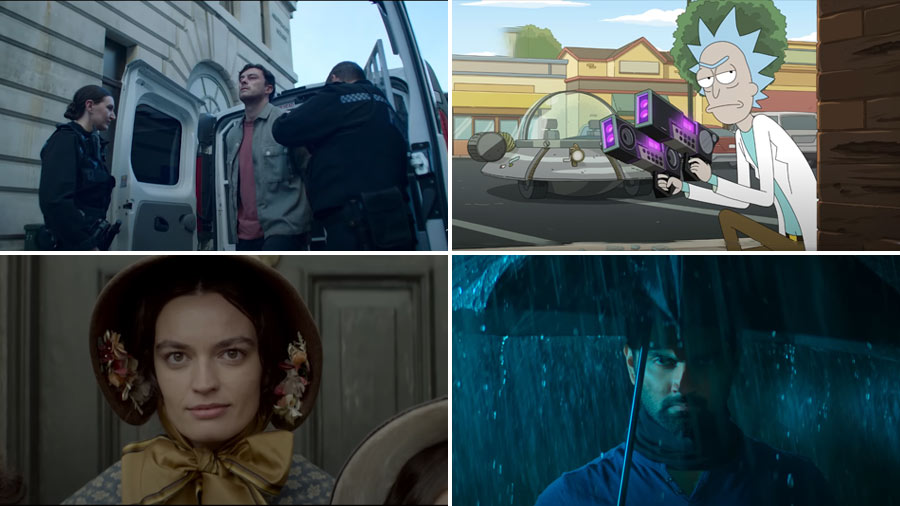 Hulu has released the trailer of their upcoming romantic comedy series Wedding Season. The series will focus on the romantic relationship between Katie and Stefan as they face a series of bizarre circumstances. Wedding Season stars Rosa Salazar of Alita: Battle Angel fame and Resistance’s Gavin Drea in the lead.

The one-minute-32-second trailer starts with Stefan (Drea) crashing the wedding of Katie (Salazar) and shouting his objections. Things take a turn when Stefan is brought in for questioning by the police after Katie is seen sitting among her guests, with her husband and his entire family lying dead.

Wedding Season will premiere on Disney+ Hotstar on September 8.

Adult Swim has dropped the trailer for Season 6 of their hit animated show Rick and Morty. The series debuted in 2013 and follows Rick Sanchez and his grandson Morty Smith’s daily space, time and dimensional travels.

The one-minute-45-second trailer gives us a glimpse of the cosmic disarray of the new season, along with all of the bizarre Sanchez/Smith family drama. The trailer starts with our favourite duo in the middle of a laser gun fight with an unknown enemy. English rock band Black Sabbath’s Paranoid plays in the background as various disastrous situations flash through in the video.

Rick and Morty Season 6 will premiere on Adult Swim on September 4, but fans in India will have to wait. The previous five seasons of the show are available on Netflix.

Warner Bros. has released the trailer of their upcoming drama Emily, based on the life of English novelist Emily Bronte, best known for Wuthering Heights. Emma Mackey of Sex Education stars as the titular character.

The two-minute trailer offers a glimpse of the celebrated author’s early years as she rebels and fights against the societal constraints of 19th-century Britain. The film focuses on her journey in writing Wuthering Heights against the wishes of her family members.

Emily will premiere at the Toronto International Film Festival before its theatrical release on October 14.

Think Music India has released the teaser of the upcoming Tamil-language action thriller Trigger, starring Tamil star Atharvaa Murali in the lead. It will be directed by Sam Anton, who has previously collaborated with Atharvaa for the 2019 thriller 100.

Trigger also features Tanya Ravichandran, Arun Pandian, Krishna Kumar, Vinodhini Vaidyanathan  Munishkanth, Aranthangi Nisha and Anbudasan in pivotal roles. The film will arrive in theatres in September, but the date is yet to be announced.