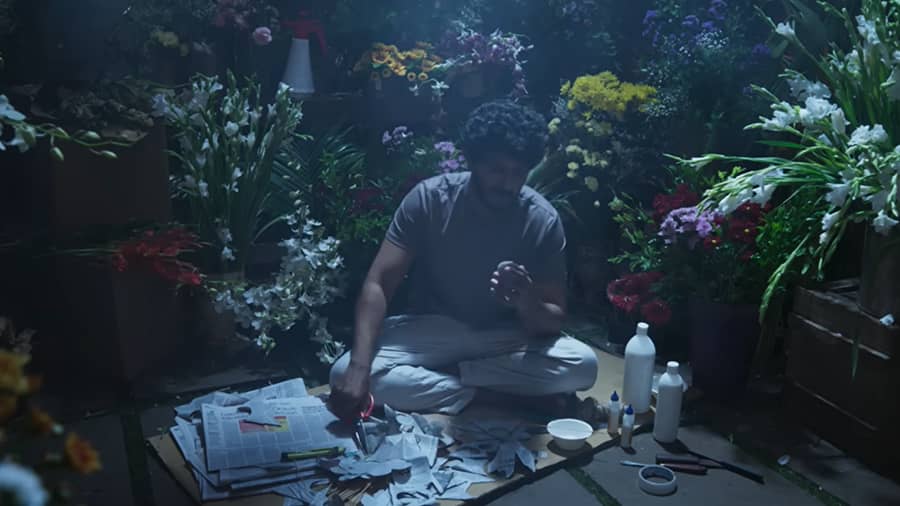 On the occasion of the legendary filmmaker and actor Guru Dutt’s 97th birth anniversary, filmmaker R Balki paid homage to him and his classic Kaagaz Ke Phool with a new teaser of his upcoming thriller movie Chup: Revenge of the Artist.

“To the one who lived life in full bloom Remembering #GuruDutt ji on his birth anniversary,” read the tweet.

Guru Dutt, who was born on July 9, 1925, was known for his cult classic movies such as Pyaasa, Chaudhvin Ka Chand and Sahib Bibi Aur Ghulam. He mostly delved into the cinematic representation of tragedies and passed away at the age of 39 in October 1964.

In the 37-second-long teaser for Chup, Salmaan’s character is seen making a bouquet of flowers from paper, a reference to Dutt’s 1959 classic  Kaagaz Ke Phool. The film’s memorable song Waqt Ne Kiya plays in the background.

In the next shot, he offers the bouquet to Dhanwanthary’s character who replies, “Kaagaz Ke Phool on Guru Dutt’s birthday”. The teaser also gives a glimpse of Deol’s mysterious character, who angrily shouts, ‘Chup’ after Dhanwanthary points out that Dutt was criticised for Kaagaz Ke Phool.

Guru Dutt’s Kaagaz Ke Phool is one of the many films that are seen as iconic today but were strongly criticised when they were released. Balki’s Chup focuses on the society’s negligence of an artist.

“Should we be more sensitive to an artist’s work or should the artists be less sensitive about what is being written about their work,” Balki said in a statement.

The teaser was shared on social media by Salmaan as well as Amitabh Bachchan, who worked with Balki on films such as Cheeni Kum, Paa and Shamitabh.

“You are an aspiration and inspiration to us all, here’s to you #GuruDutt ji! #ChupRevengeOfTheArtist” Salmaan wrote in a post on Instagram.