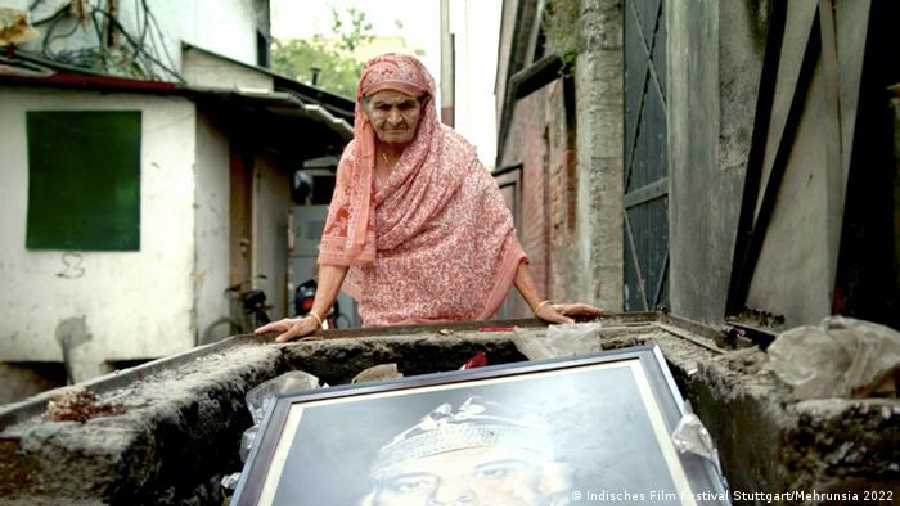 A film on an 80-year-old burning her marital bed and a documentary on a rural newspaper run by women won prizes at the event in the southern German city.

An 80 year-old widow wants to restart her acting career but finds the odds stacked against her. She then burns the marital bed that she'd shared with her late husband in an attempt to rid herself of painful memories and reclaim her life from her patriarchal past.

"Such an unheard-of event and such a haunting image that you have it in your head long after the film is over," said the German jury members, including Maximilian Hoehnle of the media organization MFG, director Anja Gurres and producer Louis Wick, in explaining their pick for best film. The story, "questions hierarchies, celebrates self-determination and inspires hope beyond the cinema screen," they added.

As expected, the Oscar-nominated documentary "Writing with Fire" won the Best Documentary award. The film tells the story of "Khabar Lahariya” ("waves of news" in Hindi), a rural newspaper in northern India run by women, many of whom have learned to read and write only recently. The jury called the film an "exciting contemporary document” that showed change was possible with willpower and support. "Writing with Fire" was directed by Sushmit Ghosh and Rintu Thomas.

The Best Short Film prize was awarded to "Succulent," directed by Amrita Bagchi. "Succulent” is a dystopian film about a woman called "M" who has an unusual job: she works for a company that aims to make families whole again, by providing 'members' who are no longer with them. M play-acts the role of diverse missing loved ones, thus enabling people to feel better, even if for a short while. The jury justified their choice by saying, "The film depicts a society of social distance — bringing to mind both the manifestations of a perverted hyper-capitalism and the consequences of the COVID pandemic."

Finally, the jury also awarded a special Director's Vision award to Nithin Lukose's "Paka,” a film about infighting and bloodshed in a village. Jury members said the film "reminds us that courageous people need to stand up and break the cycle of mistrust, violence, and aggression."

Sponsored almost entirely by Baden-Württemberg-based entrepreneur Andreas Lapp and with support from the state's cultural ministry, the film festival in Stuttgart has been an annual affair since its inception in 2003. Previously called "Bollywood and Beyond," the event focuses primarily on arthouse cinema in Hindi and other Indian languages.

Speaking to DW at the opening ceremony, Lapp said the idea for the film event in Stuttgart first took root at a wine festival in Mumbai in 2003. The event was organized under the theme "Stuttgart meets Mumbai," Lapp recalled, explaining that the two metropolises are partner cities. Wolfgang Schuster, the mayor of Stuttgart at the time, suggested organizing a similar event in Stuttgart.

"It was late in the evening, we had all had a considerable amount of wine, and on this evening, at that table, we decided we would hold a film festival," Lapp explained.

After that, Stuttgart officials, including festival director Oliver Mahn realized the project within six months, enlisting the support of long-time casting director Uma da Cunha, who was awarded Baden-Württemberg's Staufer Medal for curating the festival for nearly two decades.

Besides helping found several film festivals in India and abroad, including in Montreal, Los Angeles and Busan, Uma da Cunha has been curating films in Stuttgart over the last 19 years. The festival has also since become a predictor of sorts in terms of a film's or an actor's future success. Examples include actors like Nawazuddin Siddiqui, who attended the festival in the early 2010s and went on to star in the Netflix hit, Sacred Games.

Similarly, actor Rajkummar Rao, who attended it in 2013, has since enjoyed considerable success in mainstream Bollywood movies. Uma da Cunha also recalled how Anurag Kashyap, the Mumbai-based film noir director, featured in the early years of the Stuttgart film festival.

"This is my favorite festival and they have done a great job in bringing Indian cinema to Stuttgart, especially since Indian cinema does not travel well,” she says, explaining that Indian films did not promote themselves well and that Indian culture was very difficult to understand.

Furthermore, overall support for Indian cinema to promote itself abroad isn't really there. "That is why an Indian film festival here or in Los Angeles means a lot to us."