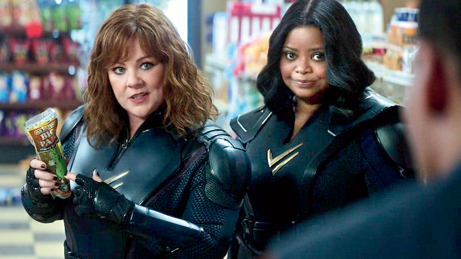 There are some film trailers that make you double turn at the plot with an intrigued smile on your face. Thunder Force starring Melissa McCarthy and Octavia Spencer was one such. McCarthy teams up with her IRL husband Ben Falcone to deliver the tale of two hilarious women who inadvertently end up becoming superheroes needed by the city to save the day/week/year. The plot of the movie would turn locks in any imaginative person’s mind and t2 sat down with a lot of expectations to see what the two women had to deliver, only to fall epically short.

Based in Chicago, the story revolves around mutants born from cosmic rays hitting the earth in 1983. Called ‘miscreants’ in common parlance, these people wreak havoc and are the cause of death of Emily’s (Spencer) parents. She vows to complete the work they started, that of destroying the miscreants and forges a friendship with the brash Lydia in school. However, the friendship though deep is short-lived and the estranged friends find themselves at two different ends of adulthood –– Lydia operating forklifts and Emily building an empire by studying genes to create a potion for a superhero. Lydia intervenes in a moment of strong nostalgia for a lost friend and is accidentally injected with the gene potion concocted for super strength to be administered to Emily. While Lydia gains inhuman strength, Emily gains the ability to become invisible and the duo sets off to bury the hatchet and embark on a world-saving mission under the name of Thunder Force.

We couldn’t help but think of the 478 missed opportunities (the number would have been similarly high had we actually counted) of rightfully taking a jab at superhero movie stereotypes. The two ladies struggling to get out of a fancy violet sports car was perhaps the only moment worth a guffaw in the otherwise mundane film. The fight scenes fall short of making an impact and the one thing that could have been the saving grace for the film –– the insanely hilarious chemistry between the two leading ladies –– is deviously ignored. There is a romance angle explored between Lydia and a miscreant Crab Man (Jason Bateman) whose only discerning superpower seems to be the inability to hold a drink with crab-like pincers for arms. However, that too leaves much for the imagination.

The main plot is the mayoral race where a candidate nicknamed “The King” (Bobby Cannavale) controls the miscreants and uses them to his advantage. However, The Dictator-esque death sentences fool no one and refuse to be humorous from any angle. The jokes in the film are trying so hard that half of that effort would have ensured an engineering seat for college in India. Lydia’s obsession with raw chicken after gaining strength or The King’s typical, literally bone-crushing move to kill people do not garner a chuckle, despite McCarthy’s impeccable comic timing. There is also the lost arc of a character that could have been a strong contender in the plot –– Emily’s genius 15-year-old Stanford graduate daughter Tracy (Taylor Moseby) whose sensibilities help save the day more than once.

Everything feels forced in Thunder Force except the friendship between Lydia and Emily and the makers decide to not explore the camaraderie to its fullest extent. Had the friendship developed and taken its course of heartbreak and reconciliation with emotions and humour, the film would have been worth a one-time watch. However, the predictable ending with the seasoning of typical feel-good moments only added to the forced nature of the entire film. While Netflix says this movie is trending in the top 10 list in India, we doubt it’s going to stay there past this weekend. At least we warned you!