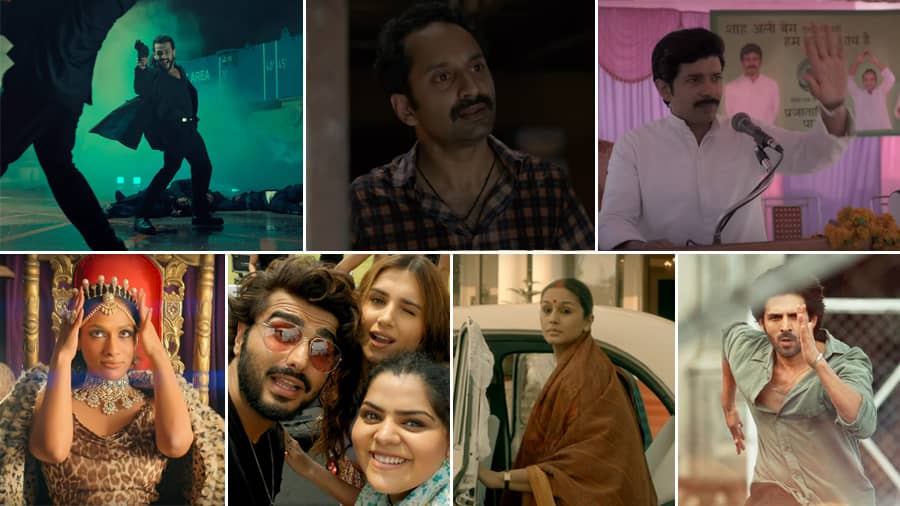 Netflix India released the trailer for season two of their series Masaba Masaba on Saturday. The real-life daughter-mother duo of Masaba Gupta and Neena Gupta are seen hustling for work and love as they tease their new adventures in the upcoming season of the web series.

The second season will also introduce new actors like Kusha Kapila, Barkha Singh, Kareema Barry and Ram Kapoor to the series. In the one-minute-50-second-long trailer, Masaba Gupta declares that she wants ‘to be the king’ and even tells Neena that she has decided that it is now going to be ‘no men, only work’ for her.

The groovy track, composed by Ankit Tiwari, is voiced by him and Tara Sutaria. The lyrics of the song have been penned by Prince Dubey. Tara is seen performing at a concert as Arjun gushes over her and they both are seen in what looks like behind-the-scenes footage. Ek Villain Returns will release in theaters on July 29.

Actor Kartik Aaryan on Saturday announced that his upcoming film Shehzada, directed by Rohit Dhawan, will hit theatres on February 10, 2023. The Bhool Bhulaiyaa 2 star took to Twitter to announce the new release date of the film, which was earlier supposed to come out in November this year.

Shehzada is the Hindi remake of the 2020 Telugu blockbuster Ala Vaikunthapurramuloo, starring Allu Arjun and Pooja Hegde. The film is produced by Bhushan Kumar, Allu Arvind and Aman Gill.

The teaser of Akhil Akkineni’s upcoming multilingual spy-thriller film Agent was unveiled by the actor on Twitter. Directed by Surender Reddy, the film also stars Malayalam superstar Mammootty in a key role.

Going by the visuals, it looks like Akhil has finally bid adieu to his boyish looks and has transformed into a jacked killing machine in this big-budget action-thriller which will see him play a patriot. The film was originally shot in Telugu, and will also be released in Hindi, Tamil, Malayalam and Kannada.

The trailer of Fahadh Fasil’s upcoming survival-thriller Malayankunju was released on Saturday. Directed by Sajimon, the film is based on a real landslide that took place in the high ranges of Kerala, which resulted in many people losing their lives and severe property damage.

Bankrolled by Fahadh Fasil and Friends and written by Mahesh Narayanan, the trailer of Malayankunju presents a realistic look of a natural disaster that wreaked havoc in Kerala. The music of the film is composed by A.R Rahman. The film is releasing in theatres on July 22.

Zee5 released the trailer for season three of their gangster drama series Rangbaaz: Darr Ki Rajneeti. The third season of this crime drama is based on the life of Haroon Shah Ali Baig, a much loved and feared gangster-turned-politician of Bihar.

Gangs of Wasseypur and Mukkebaaz actor Vineet Kumar Singh returns to OTT with this series. Navdeep Singh of NH10 and Manorama Six Feet Under fame is serving as the showrunner of this series. Directed by actor-turned-director Sachin Pathak and written by Siddharth Mishra, the series will premiere on Zee5 on July 29.

SonyLiv released the teaser trailer for the second season of their political drama Maharani on Saturday. Huma Qureshi will return as the chief minister of Bihar, Rani Bharti, in the show.

The short video teaser gives a glimpse at the upcoming battle between chief minister Rani Bharti and her husband Bheema Bharti, played by Sohum Shah. The teaser did not give a release date for the second season. The show’s first season was released in 2020.