Chiranjeevi’s Bhola Shankar 2 to Mammootty’s Christopher: News from down south

From trailers and teasers to new film announcements, here’s a quick recap of the week that was for the south film industries 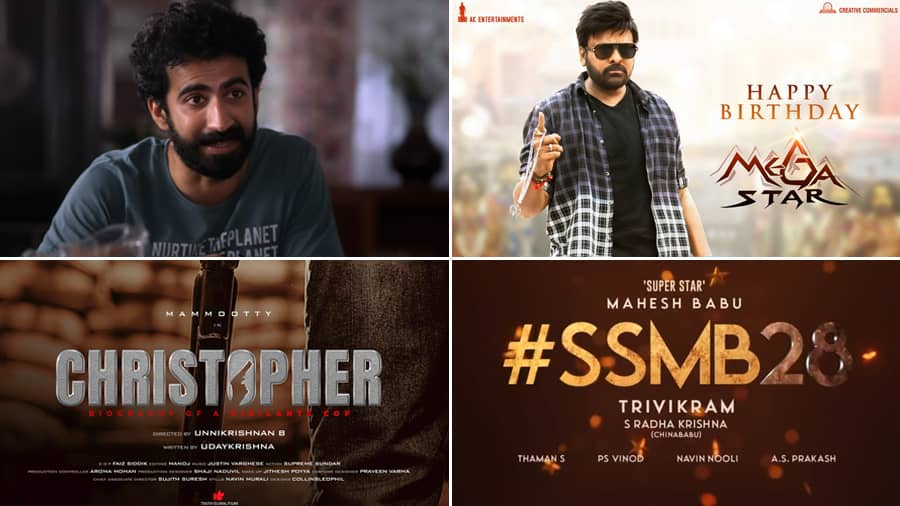 A lot has been happening in the film industries down south lately. Besides the trailers and first-look teasers of big banner films, headlined by stars like Vijay Antony’s Kolai and Prabhas’s Salaar, many other developments in the southern film industries kept the social media abuzz over the weekend.

The makers of Chiranjeevi’s upcoming Telugu film Bhola Shankar have announced that the film will be released in theatres on April 14, 2023. Directed by Meher Ramesh, who has also helmed Prabhas-starrer Billa, the film also stars Keerthy Suresh and Tamannaah Bhatia opposite Chiranjeevi.

The makers of Yogi Babu’s upcoming film Boomer Uncle have shared the film’s first look on Twitter. Billed as a dramedy, Boomer Uncle also stars Robo Shankar in the lead role. Directed by debutant Swadees MS, the film is said to have sci-fi elements in it and revolves around a heist.

In the first look character poster of the film, Yogi Babu is revealed as Nesam and Robo Shankar, who appears in a Hulk-like look, is revealed to be Minor Kunju.

Most excited to unveil the character look of #boomeruncle Check out the poster tease of the fun ride..

Superstar Mammootty has shared the first look poster of his upcoming Malayalam thriller, titled Christopher. The film is helmed by B Unnikrishnan, who recently directed Aaraattu starring Mohanlal and has earlier worked with Mammootty in Pramani.

The film’s tagline reads: “Biography of a vigilante cop.” Christopher, written by Udaykrishna, will also star Aishwarya Lekshmi as the female lead.

The makers of Mahesh Babu’s upcoming Telugu action entertainer SSMB 28 have shared the release date through a teaser.

The film also stars Pooja Hegde and is slated to hit the screens on April 28, 2023. Haarika & Hassine Creations shared the teaser on Twitter and wrote: “The Reigning Superstar will arrive on 28th April 2023! Get ready to witness @urstrulymahesh garu in a scintillating Massy look & high octane entertainer ~ #SSMB28”

Empuraan, the sequel to the 2019 hit Malayalam political thriller Lucifer, starring Mohanlal, has stepped into its pre-production stage.

Aashirvad Cinemas released an announcement video in which actor-turned-director Prithviraj Sukumaran, who helmed the first part, said that Empuraan is officially going on the floors. The script of Empuraan is penned by Murali Gopy and the film will again star Mohanlal in the lead role.