Bhumi Pednekar in yet another hatke character in Sonchiriya

In an interview, the actor talks about Chambal and holding a rifle 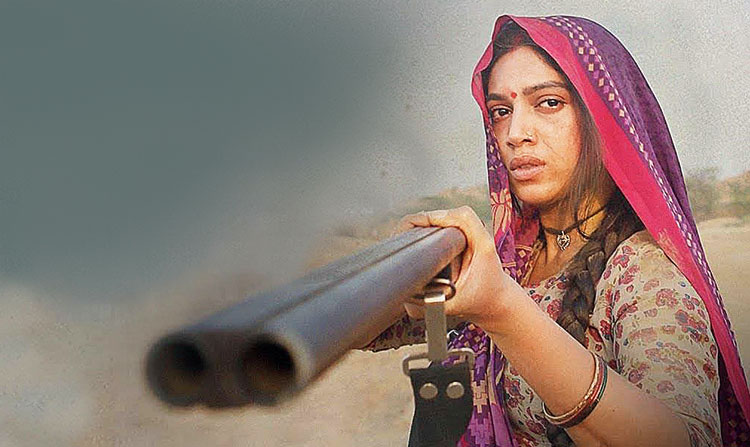 Talking about your mixed bag of films, you have quite a lineup this year!

I’m pretty much shooting back-to-back, and the fun bit is all these stories and characters are so unique. I’m honestly having a ball because every three-four months I’m playing this girl who’s strong with a wonderful story to be told, but these characters are all so different from each other with the way they look and the kinds of lives they’ve led. There’s a lot of enrichment of Bhumi as a person that’s happened since my first film.

One of the films I am most excited about is Dolly Kitty Aur Woh Chamakte Sitare, which I believe you’ve finished shooting for...

Yes. I swear to you, working with Konkona (Sensharma) and Lanki (Alankrita Shrivastava, director) has been such fun. I went from Sonchiriya, which is this quirky, action-packed revenge drama, a set that’s dominated by testosterone, to this film that’s all about girls. It’s a true chick flick. Alankrita is such a crazy filmmaker, and I loved Lipstick Under My Burkha. She has balls!

Konkona is one of my favourite co-stars. Alankrita is such a nuanced director, and she’s got me to do things I wouldn’t have imagined doing on celluloid, and with such comfort. The beauty of my character is she’s this 22-year old naive girl who’s just looking for a better life, as opposed to Koko who’s led a certain amount of life in a certain amount of confinement, but she’s a firecracker. It’s a wonderful amalgamation of these two stories, and it’s been quite an experience.

After a comparatively quiet 2018, Bhumi Pednekar is in for an action-packed 2019. Coming up first is Abhishek Chaubey’s Sonchiriya that’s set in Chambal in the 1970s, followed by Dolly Kitty Aur Woh Chamakte Sitare with Konkona Sensharma and Saand Ki Aankh that she’s just started shooting for. Before Bhumi left to shoot this Anurag Kashyap-produced film with Taapsee Pannu, she chatted with The Telegraph about understanding Chambal, her new favourite co-star and holding a rifle for the first time.

When a director like Abhishek Chaubey comes to you with a film, is it an automatic ‘Yes’?

(Laughs) More or less. When he got in touch with me, I didn’t know it was for his film; I thought it was for a film he was producing. When he texted me asking to call when free, my brain was frozen. I immediately called him, but very little of that conversation really registered in my head. All I remembered after I hung up was — ‘Meet me in the office’.

I had met him once before, because we were in talks for some other film that they were producing. I was mentally prepared for the conversation to be about that same film. And then he told me he’s directing this film himself, and I was like, ‘Okay....’ He then asked me when I’d like a narration, and I went, ‘Right now if you have the time’.

When I heard the narration, I was blown away. It was anyway quite a moment for me, because he’s always been on my bucket list. I truly feel he’s one of the finest filmmakers in our country, and for me to do a Chaubey film so early on in my career is truly an honour. I just wanted to be a part of the story; I knew it would be a tough one to do but I wanted to do it.


She’s (Indumati in Sonchiriya) so far away from me, she’s so far away from the life that I’ve seen. She has a lot of courage, and she’s a survivor. The beauty of this character is that she doesn’t know she’s these things
- Bhumi Pednekar


All the characters you’ve played till now have been far removed from who you are as a person. But this one is even more so!

Oh my God! She’s so far away from me, she’s so far away from the life that I’ve seen. To begin with, the film is set in the 1970s. And then it’s 1970s in Chambal! It’s not even in a place that I could recognise. Chambal, even today, is really away from any kind of modernisation. I couldn’t even begin to understand the kind of life and world this girl belonged to. Chaubey being Chaubey managed to immerse us all into that world.

My character is really amazing; she has a lot of courage, and she’s a survivor. The beauty of this character is that she doesn’t know she’s these things. It’s the circumstances and the situations that she goes through that make her this way. She’s also maternal. The life they led back then, they’ve seen suppression of a different kind and they have no idea of what the world is like outside their homes. Their life is only about their families, their husbands, the men of the house, the children, cooking, cleaning, farming, just doing everything; they don’t know that life can be any different. They don’t have a say and can’t have an opinion, and for me playing a girl like that is very tough, because I’m supremely opinionated, very independent and very empowered.

What does it take then to get under the skin of the character?

You have to un-condition yourself. The first thing Chaubey said to me, I remember, when I had my readings was that I was still operating from a place of pride. And that can’t happen, because my character doesn’t understand the concept of pride. She doesn’t know that, as a woman, she can have a say, or answer back. She doesn’t know these things. Her life is a series of events, and she’s accepted them as the only truth and the only way things happen, that this is how things are done. So, there was a lot of unlearning I had to do.

Even if I strip away her immediate surroundings and environment, just the life she’s led or her present in the film is very different from my present or my near future. It was everything from her language, the way she looked to the kind of life she’s had to her past experiences. After the initial few sessions over two-three months, I actually went back to Chaubey Sir with a 10-page story outlining what I thought her life has been like. It was such a wonderful process, just learning the dialect to living like her. My life had changed, I lived for two months like her.

You went to Chambal a week before you started shooting. What was that experience like?

Everything that Chaubey had spoken to us about came alive around us. Though we are 40 years after the period we’re showing in the film, life isn’t that different. That was a very hard-hitting truth to me, and this is a very big reason why I did Sonchiriya also.

Everything that we’re saying in the film is very relevant to our society even today. Yes, we’ve progressed and there’s modernisation — they all have mobile phones and maybe a small TV set in their houses and Internet, but the mentality hasn’t really changed. I felt really happy that I get to be a part of a story where I’m playing one of these women, and I can probably show them what a different life could be. That at times when you stand up for yourself or for the people you love, it’s possible. 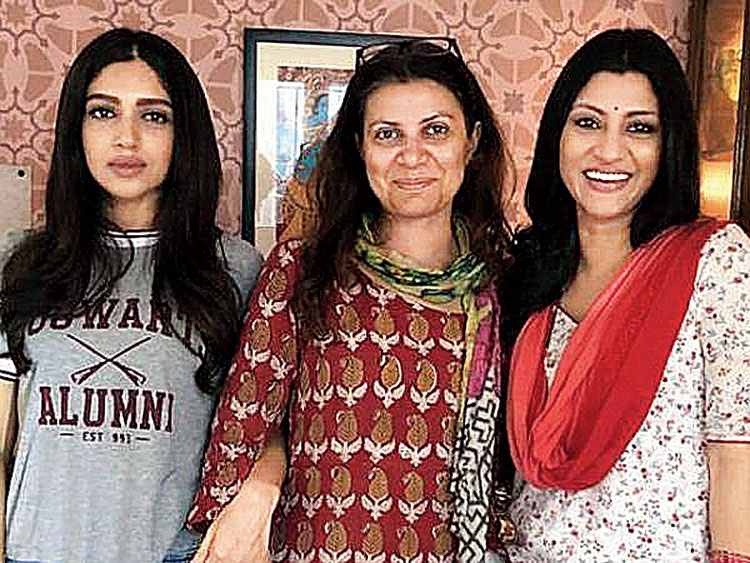 Bhumi with Alankrita Shrivastava and Konkona Sensharma
A file picture

I feel the whole definition of a hero or heroine has changed tremendously over the last five years. The whole idea of a commercial film or a hit film has changed tremendously, and I think 2018 has been a great example of that. I feel that a heroine or a leading character is someone who stays back with you, and I would like to believe that all my characters have stayed with people
- Bhumi Pednekar


Was this the first time you got to handle a weapon of any kind?

Yes, it was. I remember the first time I held a rifle — the metal was so cold and it’s so heavy, I also didn’t know the amount of pressure I had to use. My first finger went numb for a week. It’s definitely a little overwhelming. But having a weapon in their world is very normal, so eventually I got used to the idea.

Four years in the industry and you’ve obviously established your acting credentials over and over again. But the one thing that old-timers will always talk about is the “heroine” role because that was supposed to cement an actress’s position in the industry. Do your managers worry that you haven’t done one of those yet?

Not really, because I feel the whole definition of a hero or heroine has changed tremendously over the last five years. And I have a great team that works with me — they’re futuristic, they know that our fraternity is going through a very organic evolution and this is how it’s supposed to be.

The whole idea of a commercial film or a hit film has changed tremendously, and I think 2018 has been a great example of that. I feel that a heroine or a leading character is someone who stays back with you, and I would like to believe that all my characters have stayed with people. People remember my characters, so I’m proud I’m a part of this change that has happened and everybody is very supportive. Everything I’m doing in the future as well is a mixed bag of every genre of film.