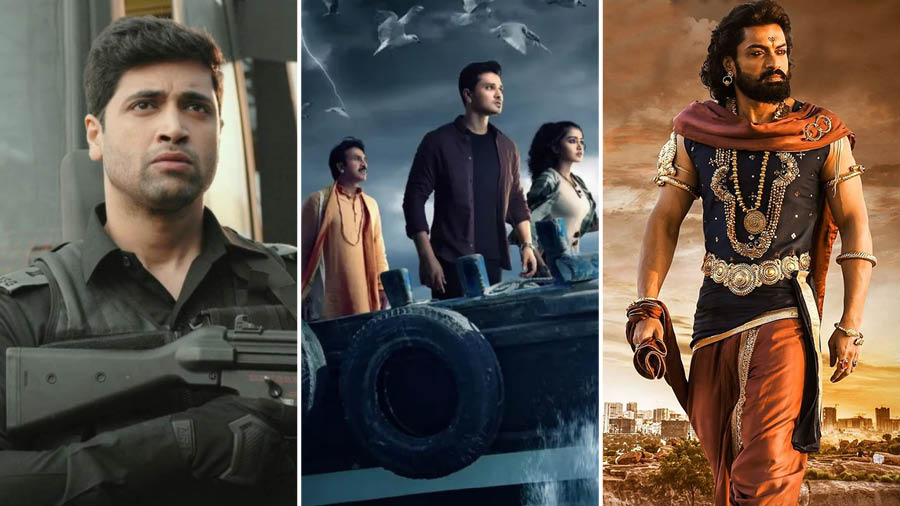 Backed by innovative storytelling and star power, Telugu movies swept the box office in 2022 with back-to-back blockbusters like S.S. Rajamouli’s action epic RRR and Hanu Raghavapudi’s romantic drama Sita Ramam. Here are five other superhit Telugu films of the year that have kept the legacy of Bahubali alive and kicking.

Sashi Kiran Tikka’s biographical action film is based on the life of Major Sandeep Unnikrishnan who was martyred in the 2008 Mumbai attacks. Adivi Sesh, who also wrote the screenplay, plays the main protagonist alongside Prakash Raj, Sobhita Dhulipala, Saiee Manjrekar, Revathi, Murali Sharma, and Anish Kuruvilla.

Major chronicles Sandeep’s life and focuses on his heroic deeds during ‘Operation Black Tornado’ at Mumbai’s Taj Hotel to thwart an attack launched by armed terrorists. Adivi Sesh received praise for his performance in the film, which emerged as a blockbuster at the box office upon its release on May 24.

Karthikeya 2 is the story of Dr Karthikeya (Nikhil), who is trapped in a web of conspiracies and betrayal, He must retrieve a mythological treasure with the help of an unlikely alley to clear his name from a murder. The movie received critical acclaim for its grand visuals, engaging narrative and close adaptation of Indian mythology.

King Bimbisara (Kalyan) from the 5th century BC accidentally lands in the modern-day world through time travel via a mysterious mirror. In his absence, his twin brother takes over the throne. Bimbisara now has to learn how to become a compassionate human being to go back to his time. The massive box office success of Bimbisara prompted the producers to turn it into a four-part franchise.

Kalyan Krishna Kurasala’s supernatural action comedy film Bangarraju, starring Nagarjuna, Ramya Krishna, Naga Chaitanya and Krithi Shetty, Bangarraju became one of the first hits of the year. Released on January 14, this is a sequel to the 2016’s hit film Soggade Chinni Nayana. Bangarraju follows a deceased couple (played by Nagarjuna and Ramya Krishna) reuniting in heaven after death. The couple, however, return to earth when they notice that their grandson, Chinna Bangarraju (Naga Chaitanya), has lost his way in life. They guide him and get him married to Naga Lakshmi (Krithi Shetty). Filled with hilarious one-liners, heroic action sequences and old-school charm, Bangarraju is a mass entertainer through and through.

HIT: The Second Case follows Krishna Dev ‘KD’ of Andhra Pradesh CID in Visakhapatnam. He investigates a gruesome murder and soon discovers that it’s a case of serial killing. As KD starts unravelling the layers of the mystery, the stakes continue to rise high and his personal life gets entangled in the way. The crime thriller became a box office sensation and is still going strong.

Watch it on: TBA