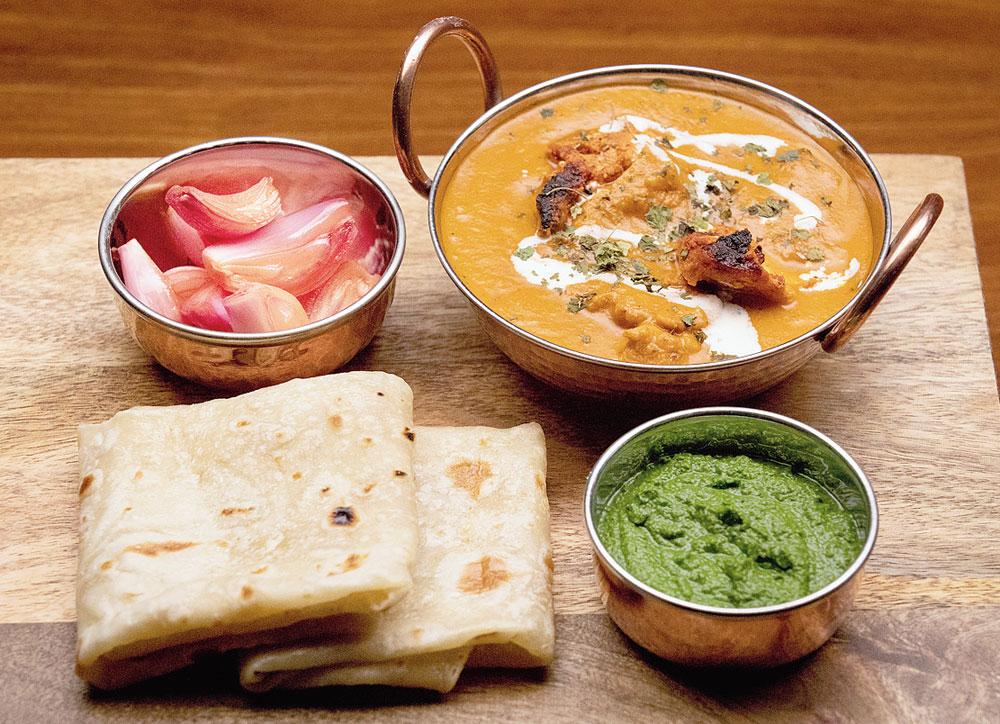 Chefs you look up to: I closely follow David Chang. Then there’s Jamie Oliver; Anthony Bourdain was someone I used to take inspiration from. Back home there’s Sanjeev Kapoor; I used to dedicatedly watch his shows. Now he is a friend and mentor. He will always be someone I look up to.

An ingredient you are loving right now: Jackfruit, green garlic. But over all, it’s mushrooms.

A dominant food trend right now: Looking within, going regional when it comes to Indian food. Just getting back the classics and presenting them in a more acceptable format. There’s so much sustainable farming happening, people are now talking about what is available in our country.

Your fave cuisine: Indian. Difficult to choose which part of India though.

Your earliest memory of cooking: When I made aloo paratha as a kid with the help of my uncle.

Your biggest culinary influence: My grandfather. Though, while growing up, I learnt cooking from my mother, I was inspired by my grandfather because I was fascinated with him in the kitchen every Sunday cooking something for us.

With TV shows, a book and the famous Goila Butter Chicken in his kitty, chef Saransh Goila is one of the youngest celebrity chefs of India who is making a mark in the global culinary world. The 31-year-old guy from Delhi recently added another feather on his cap (read: chef’s hat) when he appeared as a guest judge on one of the episodes of MasterChef Australia, on the popular show’s 10th anniversary special season, in which the contestants had to recreate his famous butter chicken for an elimination round.

In a telephonic chat with us, Saransh spoke about his MasterChef experience, future plans and a possible Goila Butter Chicken restaurant in Calcutta.

You are globally known for your Goila Butter Chicken. What’s the secret that makes it different from butter chicken served elsewhere?

It’s actually a home recipe. I used to cook it for my parents when I was much younger. They used to always complain that as vegetarians, they got to eat a much more shoddy version of butter chicken, which is paneer butter masala. And that would always be too creamy and too sweet. When I went to my culinary school, I figured out a recipe where I would smoke it with coal and serve it to them. So basically, it would be more robust and smoky. That’s how I ended up infusing smoke into a traditional butter chicken gravy.

I also reduced the amount of fat and dairy that goes into the dish — basically cream and butter — so the tartness of tomato shines out. Since we infuse smoke using coal — a more traditional technique — it makes the dish a little different. So Goila Butter Chicken is lighter, home-style and guilt-free; something that a millennial would eat. The dish is more in sync with today. It’s not modern in its presentation but in its flavour profile.

What is your earliest memory of having butter chicken?

I am not someone who grew up eating butter chicken. The first butter chicken I ate was in my college, IHM, Aurangabad. My trainer was an ex-ITC chef and he had a very good recipe for the dish. That was my first taste of butter chicken — creamy, very refined, smooth with lots of flavours. Then when I went back to Delhi and tried the local butter chicken that people like, it was very different than what my trainer had made me try. What I realised was that people would actually savour the extra creamy, buttery and bright orange version of the recipe.

It’s interesting that despite being a vegetarian for most part of your life, you are known for a chicken dish. Wasn’t it difficult to understand the flavours and innovate on a dish which you had never had until you were in college?

When I was first put into the butchery section in college, I went with a professional approach since I didn’t have any option. I didn’t know how meat tastes, how it’s cooked. I feel cooking is a balance between passion and technique.

Your personal favourite when it comes to butter chicken apart from your own?

It’s actually from a restaurant in Delhi’s Ashok Vihar called Invitation. For me, that’s the best butter chicken I have ever had.

How did your restaurant come about?

I always thought I would open a fine-dining restaurant. I never thought I would end up opening a QSR which is centred around butter chicken! It occurred to me only after I started doing TV shows that we, as chefs, look at food as a luxury but when you travel across India you realise that it’s first a necessity. So this is when it came to my mind to test it out as a venture since I already had a popular recipe. So June 2016 is when I opened Goila Butter Chicken in Bombay.

What’s next for Goila Butter Chicken?

We are looking at expanding to different parts of the country. Right now it’s just Bombay but we are looking to expand to cities like Bangalore, Calcutta, Delhi and Gurgaon.

You have been a contestant yourself on Food Food Maha Challenge (a reality show on Food Food) which you ended up winning too (2011). How was it like being a guest judge on a show like MasterChef Australia?

Life has come full circle for me. When you find fame through a reality show, it becomes much more challenging because there’s fame to deal with. Suddenly people start doubting your capability as a restaurant chef because they feel you are more of a “TV person”. So there has to be a balance. You have to keep honing your skills.

I feel satisfied with the fact that I got an opportunity through winning a reality show. I was very, very happy that MasterChef got me on board not only because of my popularity but because of my product. That makes me feel very proud. I was just out of college when I had started watching MasterChef and I always used to dream of being on the show. And to be there as a guest judge, getting so much respect, makes you feel great.

The set is beautiful, it’s a permanent structure that has been stationed there for 10 years. They are very professional and honest in their approach towards the show. No wonder MasterChef Australia is the most popular MasterChef franchise across the globe. There’s a soul to the show.

Tell us some of the fun things that happened behind the scenes on the set...

When I met Matt (Preston) on the set, he was talking about his trip to India. He is such a great orator that when he was talking about Hyderabadi Biryani, just the way he was describing it made me feel like having it right then and there. He is a fun person and also very particular about his costumes. I had done a pop-up at chef George’s (Calombaris) restaurant, as a part of the Melbourne Food & Wine Festival in the same month when we were filming MasterChef. He loves to party, engage with young people and promote them. I owe this opportunity to him.

George is full of life, energetic. Matt is probably a romantic and an intellectual and Gary is down to earth, likeable and honest. He loves India, be it the food, spices, people… he spends three months a year in India now. As an Indian, you would relate to him the most, he is very warm.

Your name is in the Limca Book of Records for the “longest road journey by a chef”. What is your takeaway from it?

If I had to break down India into different cuisines, there are so many communities, the cuisine is so diverse… every 200km the flavour, food, spice blend, ingredients change. I was very fascinated with the North-east in fact — lots of fermentation, different cooking techniques. Nagaland was an amazing state to be in and experience the tribal cuisine; even Assam was interesting.

In the south, I found Andhra cuisine to be quite interesting… their pickles are amazing. I discovered gondhoraj lebu in Calcutta. I discovered many such ingredients and realised it would probably take a lifetime if I had to discover everything in our country.

Any particular region that stood out?

It would definitely be Nagaland. In fact, I did a special at my restaurant — Black Sesame Pork, which was there for three months.

Globally, do you think the stereotypes about Indian food has somewhat started breaking or do they still exist?

The stereotypes are definitely breaking. There are many international restaurants who are presenting India in a very different format. Be it Gaggan (Anand) in Bangkok or chef Garima (Arora) who became the first Indian woman to get a Michelin star. People have started to realise that Indian food isn’t just about curry-driven gravy, it’s much more than that. It’s balanced, there’s so much history, influence of Ayurveda… this is the time for Indian food to reposition itself.

A TV show host, writer and a chef, which role do you like playing the most?

The profile that works for me the most is that of a ‘chef traveller’. I like to travel within India and share with the world what our country has to offer. That’s something that gives me the most satisfaction.

What will we see you doing next?

Sadak Chef is something I am working on at the moment. The show (for a digital platform) promotes street chefs who have created amazing dishes but have never got their due. I will be travelling across the country. I am working on a couple of other shows as well; an international one too which we are doing with a big channel in Singapore. I am looking to be more global, trying and selling Indian food across the globe. That’s where I am headed with all my content and activities that I am doing in 2019.