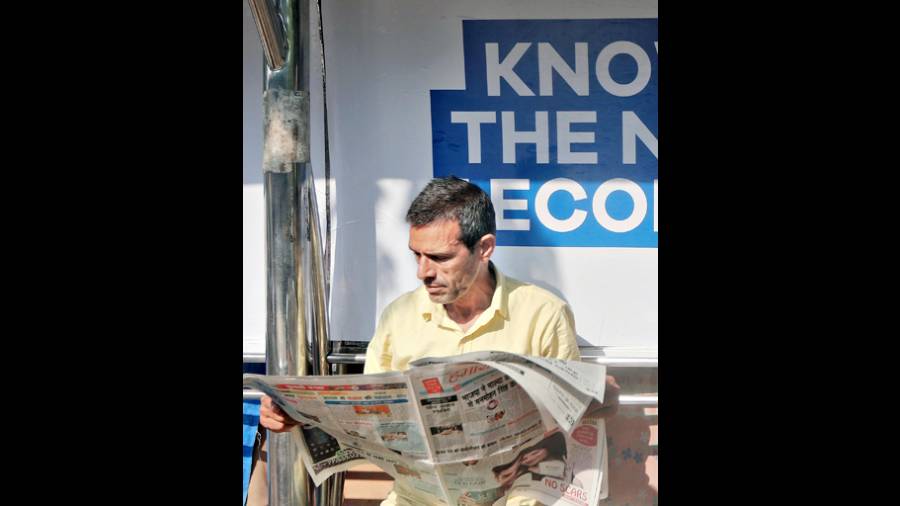 British decided to standardise the vocabulary and orthography of formal Hindi at the Fort William College in Calcutta
Anita Joshua   |   Published 25.11.22, 03:58 AM

Book: The Journey of Hindi Language Journalism in India from Raj to Swaraj and Beyond

The Hindi media in India has never had it so good in terms of access to resources, acknowledgement of its reach and political patronage — if the last is a good thing in a democracy — as it has since 2014 in particular. But the veteran journalist, Mrinal Pande, says in her book, The Journey of Hindi Language Journalism in India, that this has been at the cost of contrarian opinion.

While this is partly a result of the control that the current dispensation likes to exert on the mainstream narrative, Pande also pins part of the blame on the “rise of managers and the denting of editorial firewalls” — this predates 2014 and applies in equal measure to a bulk of the legacy and electronic media in the country.

Pande, the country’s first woman editor-in-chief of a multi-edition Hindi newspaper — she gave up a secure job of teaching English literature in a Delhi University college to join ill-paid journalism in the changed atmosphere after the Emergency — brings to the book the rigour of a researcher, while tracing the journey of Hindi language journalism from the early-19th century when the British decided to standardise the vocabulary and orthography of formal Hindi at the Fort William College in Calcutta.

She shows how the British saw “the hidden political potential of Hindi in Nagari as a good tool to help craft a separate identity” for the Hindu populace, setting it apart from Urdu-speaking Muslims in a purposefully created divide that continues to haunt North India even now, two centuries later.

Pande, who is vocal against the imposition of Hindi at a time when the ruling dispensation has prised open the language issue capped after the violence of the 1960s, offers a comprehensive history of Hindi language journalism. Packed with statistics, the book traces every development — big and small — that shaped its evolution from an appendage of English media to the powerhouse it has become today.

While dwelling on the evolution of Hindi journalism and the politics that shaped it, Pande also maps the technological and business-model changes that helped this medium chart its course from being an under-funded copy of flagship English editions to becoming a money-spinner; courtesy the demographics of the Hindi belt. So much so, that by the end of the 20th century, regional editions of metro-based English dailies and their luxury supplements began piggybacking on Hindi papers in a role reversal of sorts.

She explains in great detail how the media got corrupted and lost its sense of purpose, driven by the lure of the lucre. In this rather dismal landscape, she sees a sliver of hope in the opportunities thrown up by the digital media, particularly in view of the fact that news consumers are no longer passive recipients.