Lower collection during the November festive season is cause for concern 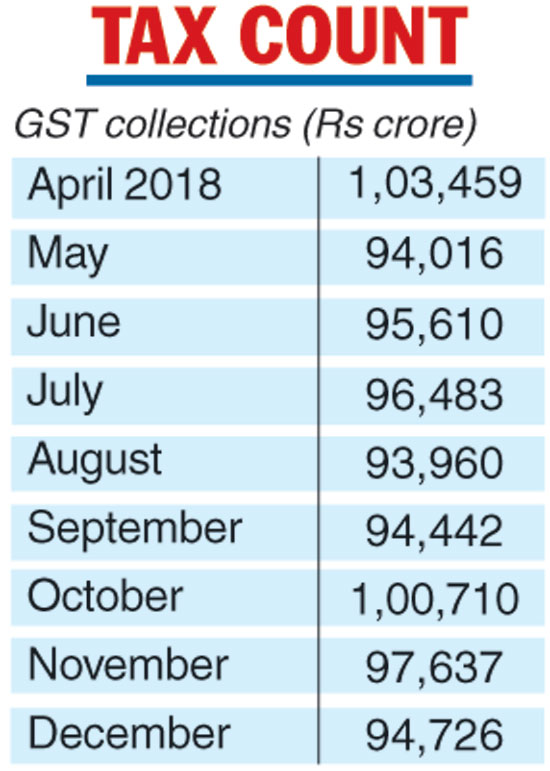 Apprehensions over the government breaching the fiscal deficit target of 3.3 per cent of GDP deepened further with the goods and services tax (GST) collection falling to Rs 94,726 crore in December.

The revenue collected in December relates to transactions made in November, predominantly the festive season. Lower collection during that period is a matter of concern, said analysts.

“The collections, while admittedly below the targets, seem to indicate that the revenues are stabilising around 95,000 crore per month, despite the rate reductions in the current fiscal. The revenues being lower than the targets could lead to more compliance pressures on businesses and more focus on anti-evasion measures,” M. S. Mani, partner at Deloitte India, said.

In the nine months (April-December) of the current fiscal, the government has mopped up over Rs 8.71 lakh crore from the GST. The 2018-19 budget had estimated the annual GST collection at Rs 13.48 lakh crore, which means a monthly target of Rs 1.12 lakh crore. This was calculated taking into account that the state GST collected by all states would be equal to the central GST as the tax is equally split between the consuming states and the Centre.

The GST revenue could come under more pressure in the coming months as the GST Council had cut rates on 23 items effective January 1, 2019. Only 28 items are now in the highest slab of 28 per cent.

The rate cut would have an annual revenue implication of Rs 5,500 crore, which means that in the remaining three months of the current fiscal, the revenue loss would be about Rs 1,375 crore.

“The slight dip in GST revenue collection compared with the last two months is a bit discouraging. This may deter the government from rationalising the rate of the goods left in the 28 per cent category such as cement, auto parts etc in the short term,” Abhishek Jain, indirect tax partner at EY India, said.

India Ratings said it expected the fiscal deficit to again touch 3.5 per cent of the GDP. “The pressure on government finances is mainly arising from the revenue side, particularly from indirect taxes and non-tax revenue. We see a revenue shortfall of Rs 22,400 crore, which is expected to originate from indirect taxes,” said Devendra Kumar Pant, chief economist at India Ratings.