Even though GST revenue collection has been over Rs 1 lakh crore in the last three months, the mop-up is less than anticipated 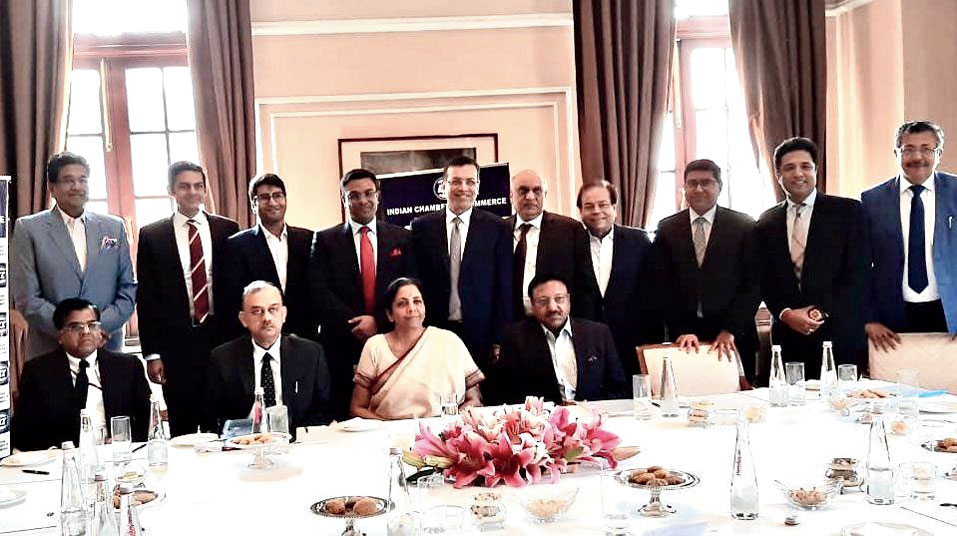 Nirmala Sitharaman with members of the Indian Chamber of Commerce in Calcutta on Sunday.
Sourced by The Telegraph
Our Special Correspondent   |   Calcutta   |   Published 09.02.20, 07:13 PM

The GST Council is working towards taking up the rate rejig exercise only once a year, moving away from frequently tinkering the slabs in an effort to weed out uncertainty from the system.

Union finance minister Nirmala Sitharaman said she had informally discussed within a small group of the GST Council to not to take up rate rationalisation every three months but once a year.

This will help, she argued, in a better planning of the revenue projection for states and the Centre and also help businesses to calculate the incidence of tax annually.

“We have discussed this with the GST Council and now literally proposed to the GST Council, not formally, but as part of a discussion among small groups, can we consider a situation where once in a year alone we would do any rate rationalisation, increase or decrease, not every three months?” Sitharaman said in Calcutta after a day-long discussion with trade, industry and professionals.

The city was the last stop for the FM, after interactions in Mumbai and Chennai following the budget on February 1.

During the meetings in Calcutta on Sunday, several issues were raised before the finance minister, especially clarifications on the personal tax amnesty scheme (Vivadh se Vishwas) and effect of the dividend distribution tax on high net worth individuals.

A team from the Indian Chamber of Commerce, led by president Mayank Jalan and representing the city’s top industrialists, also met the FM and the secretaries in the finance ministries separately.

During the open house interaction, the tinkering of GST rates was raised, prompting the FM to nudge the audience to take it up with the respective state governments as they are all members of the GST Council.

Arguing the merit of holding the rates for a year, the FM said any change in the rates of a product or a service creates a ripple effect in the entire value chain and throws up many problems, including the refund of input tax credit.

“When GST was brought in, extensive debates had taken place about rates in the VAT and GST regime and what would be revenue neutral (rate). Now after entering into one rate, changing it also leads to many problems, refund issues. Business cannot plan how much to keep aside for tax in a whole year. Similarly, the government cannot make an assessment on how much revenue will be earned from GST,” she explained.

Even though GST revenue collection has been over Rs 1 lakh crore in the last three months, the mop-up is less than anticipated. One of the reasons could be that the average rate has fallen to 11.8 per cent following several round of reduction from 14-15 per cent when GST was rolled out in July 2017.

This has put a strain on the finances of both the states and the Centre, who in particular is constitutionally bound to compensate the revenue loss of the states for five years.