Mad rush for liquor after accident 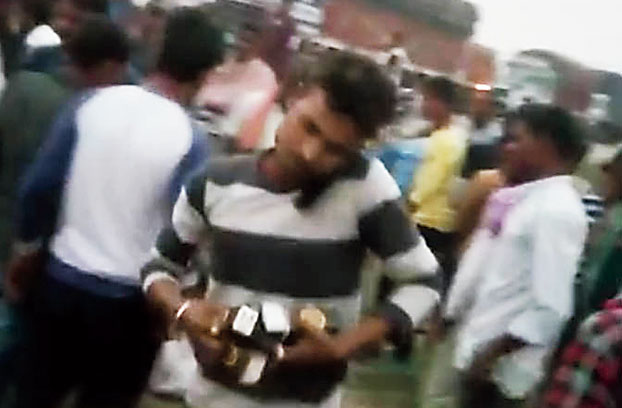 Piparia Mor under Durgawati police station in Kaimur district witnessed an unusual rush of residents on Saturday. Every one was trying to collect as many bottles of Indian-made foreign liquor (IMFL) from the road connecting Bihar with Uttar Pradesh.

Two youths riding a motorbike met with an accident near Piparia turning. As the driver received severe injuries on his head after being hit by a speeding truck, the man on pillion escaped from the spot after leaving behind a bag containing bottles of illicit liquor.

The injured, identified as Imran Sah, a resident of Akauri village under the jurisdiction of Mohania police station in Kaimur, was rushed to a nearby primary health centre from where he was referred to a Varanasi-based hospital. The police said Sah was suspected for bootlegging.

Durgawati police station house officer (SHO) Dinanath Singh said efforts were on to ascertain the identity of Imran’s accomplice, who managed to escape from the spot. He said no liquor bottle was found on the spot when the police visited there. The motorbike was later seized. The SHO said a police team would be sent to Varanasi to record the statement of the alleged bootlegger after his health improved. Traffic remained paralysed for about half an hour because of the liquor rush.

Last month, two youths were crushed under a truck near Chainpur in Kaimur while trying to dodge the police checking vehicles. The police had recovered a huge quantity of liquor smuggled from Uttar Pradesh from the spot.