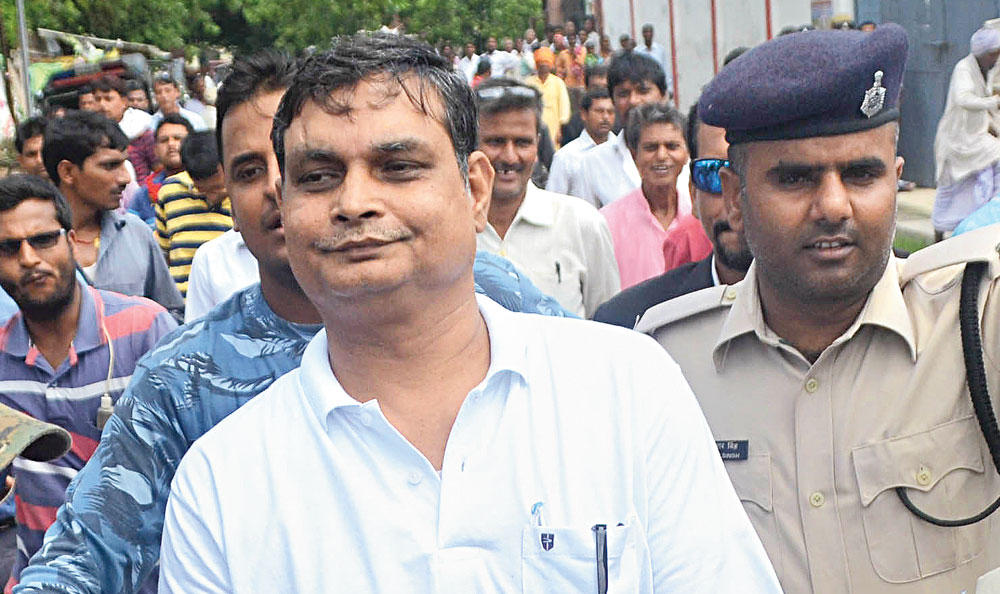 Brajesh Thakur, key accused in the Muzaffarpur shelter home sexual abuse case, was shifted from the special central jail in Bhagalpur to the high-security Patiala jail in Punjab on Wednesday.

Bhagalpur district magistrate (DM) Pranav Kumar said a team of officials along with an “upset” Brajesh left for Punjab by train on Wednesday. “He will reach Punjab on Thursday,” the DM said.

Elaborate security arrangements have been made for the transfer of the high-profile prisoner on the directive of the Supreme Court.

Earlier, inspector-general (prison directorate) Mithilesh Mishra issued a directive to the superintendent of the special central jail in Bhagalpur to ensure immediate transfer of the undertrial. “We are not supposed to share certain information with the media because of security reasons,” he told The Telegraph.

Sources said Brajesh was taken to Patiala by Katihar-Amritsar Amrapali Express. The Bhagalpur district police had provided two sub-inspectors and an equal number of armed guards besides a few constables to escort Brajesh from Bhagalpur to Patiala. A total of 13 tickets of the train were reserved.

Bhagalpur senior superintendent of police (SSP) Ashish Bharti said the district police provided assistance to the jail administration in shifting the undertrial. “I am not supposed to reveal the information for obvious reasons,” Bharti said over phone from Bhagalpur.

The officials posted at the central jail where Brajesh was lodged also avoided calls from the media. Sources said Brajesh complained of severe headache and nausea as soon as he came to know about his transfer order.

The sources also said he looked upset over the transfer order. Brajesh was arrested on June 2 this year after a complaint was lodged with the women’s police station in Muzaffarpur on May 31. He is the third high profile prisoner to be shifted to outside the state in recent months.