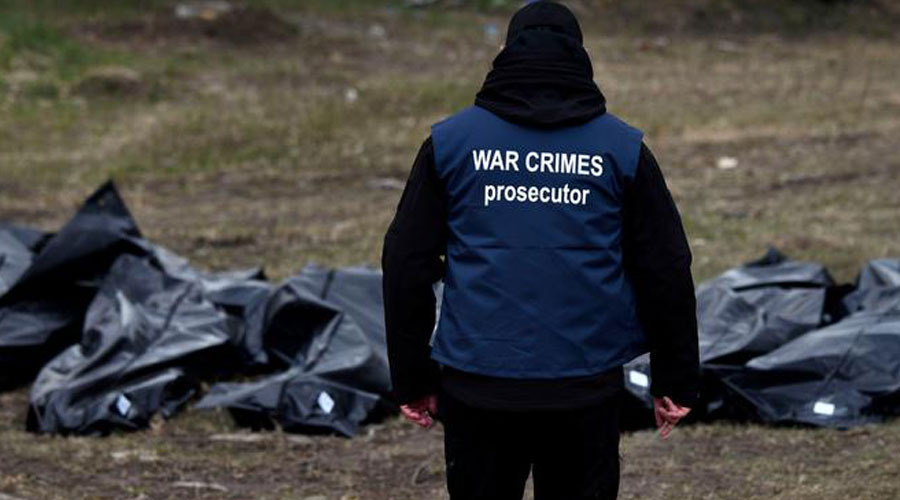 This article was last updated at 08:40 IST

Russia "is today the most direct threat to the world order with the barbaric war against Ukraine, and its worrying pact with China," von der Leyen said during a summit in Tokyo.

Those concerns were shared by Japanese Prime Minister Fumio Kishida, whose government has been one of few in Asia to join in strict international sanctions against Moscow.

"Russia's invasion of Ukraine is not just a matter for Europe, but it shakes the core of the international order including Asia. This must not be tolerated," Kishida said.

The remarks came following an EU-Japan summit, where they announced a new digital partnership — the first of its kind between the bloc and another country. The agreement includes measures to strengthen cooperation on cyber security and artificial intelligence as well as boosting the development of digital technology.

"Our cooperation in Ukraine is critical in Europe, but it's also important in the Indo-Pacific and we also want to deepen our consultation on a more assertive China," said European Council President Charles Michel.

German Economy Minister Robert Habeck believes Germany may just be able to make it through the next winter without Russian gas provided a number of measures were introduced.

"If we have full storage facilities at the turn of the year, if two of the four floating LNG tankers we have leased are connected to the grid and if we make significant energy savings, we can to some extent get through the winter if Russian gas supplies collapse," Habeck told German business weekly publication, WirtschaftsWoche.

Habeck stressed the need to cut back on consumption as far as possible.

"Less consumption is the be-all and end-all," the minister said.

Germany depends heavily on Russian gas and there are concerns that a halt in supply could lead to a recession.

Finland due to announce position on NATO membership

Finnish President Sauli Niinisto is on Thursday expected to take an official stance on the possibility of NATO membership.

"My message is clear: Finland will ensure its security. That is not to anyone's detriment," Niinisto said last week following a meeting with the parliamentary defense committee.

Finland shares a border spanning 1,300 kilometers (810 miles) with Russia, and has steered clear of joining in order to maintain relations with Moscow. However, Russia's invasion of Ukraine has shifted sentiments dramatically, with the latest poll conducted by public broadcaster YLE suggesting 76% of Finns are in favor of joining NATO.

Sweden is also expected to make its position on joining the alliance known over the weekend.

Kyiv Mayor Vitali Klitschko says residents coming back to the capital should be cautious, saying attacks by Russia could happen "any second."

In an interview with US broadcaster CNN, Klitschko said he had "no doubt" the capital, Kyiv, is still Russia's "main target."

He said the war had "changed the life for everyone" and that he hoped to see an end to the fighting "as soon as possible."

"Safety is the main priority right now," he added. "We hope our warriors defend us, but the risk is still there and without our partners, without United States and European countries we can't survive."

Biden sees greater role for US farmers amid war in Ukraine

US President Joe Biden has pledged to help support farmers in a bid to address the challenges brought on by the war in Ukraine.

In a visit to a family farm in Illinois on Wednesday, Biden thanked farmers "who are the breadbasket of democracy."

"We can make sure that agricultural exports will make up for the gap in Ukrainian supplies," Biden said.

The Biden administration announced that there would be a doubling of funding for domestic fertilizer production.

Farm management tools would be enhanced for planting and soil requirements.

The US was also trying to find ways to help Ukraine ship 20 million metric tons of wheat and corn.

The war in Ukraine has caused major disruptions to the global food trade, leading to rising prices and concerns about food security in some parts of the world. Russia and Ukraine produce about a third of the world’s wheat and 20% of its corn. Russia is also a major supplier of fertilizers farmers rely on to keep crop yields high.

Russian soldier to be first before a war crimes trial

Ukraine's prosecutor general, Iryna Venediktova, said that her office has charged a 21-year-old Russian sergeant in connection with the killing of an elderly civilian who was gunned down while riding a bicycle.

The soldier is alleged to have been serving with a tank unit and was accused of firing at the man in the village of Chupakhivka in the northeast of the country.

According to Venediktova's office, more than 10,700 alleged war crimes are being investigated with over 600 suspects currently identified.

Venediktova said the soldier could get up to 15 years in prison. It is not yet known when the trial will begin.

Human Rights Watch says that Russia has made repeated use of at least six different types of cluster muntions. The rights watchdog also said Ukraine appeared to have used the banned munitions at least once.

HRW released a 20-page report detailing Russia's use of the munitions in populated neighborhoods and documented several cluster munition attacks by Russian forces in the Ukrainian cities of Chernihiv, Kharkiv, Mykolaiv and Vuhledar.

According to a New York Times report, Ukrainian forces allegedly used cluster munitions in an attack on Husarivka in Kharkiv oblast on March 6 or 7, which is when the village was under Russian control.

Russia and Ukraine have not joined the Convention of Cluster Munitions, which is a 2008 treaty banning cluster munitions.

Summary of Wednesday's events in Russia's war on Ukraine

British Prime Minister Boris Johnson has inked security agreements with Finland and Sweden that would see the UK provide support if the two Nordic nations came under attack.

UNICEF spokesperson James Elder told DW that not enough is being done to help children escape the war in Ukraine and that a child has been displaced from their homes "almost every second since the war started."

The US House of Representatives agreed to a fresh $40 billion (nearly €38 billion) in assistance for Ukraine, with funding for defense, humanitarian and economic needs.

Britain's Defense Ministry said in an intelligence update on Twitter that fighting continues between Russian and Ukrainian forces on Snake Island, which lies off the coast of Ukraine's southwestern Odesa region.

DW correspondent in Ukraine Amien Essif said that Ukraine is hoping for Russian forces to retreat from around the second-largest city Kharkiv, similar to Moscow's retreat from areas around Ukraine's capital in April.

The leaders of the Russian-occupied region of Kherson in southeastern Ukraine said they plan to ask for the area to become a part of Russia, Russian media reported, citing an official.

Ukrainian President Volodymyr Zelenskyy said the war could have likely been prevented if Kyiv had been a member of the trans-Atlantic military alliance NATO.

Slovak President Zuzana Caputova and Polish President Andrzej Duda said in Bratislava that their countries would work together to help Ukraine become a candidate for EU membership as soon as possible.

The UN's nuclear agency says it is again receiving remote data from the Chernobyl power plant in Ukraine. The transmission was interrupted when Russian forces occupied the site at the start of their invasion on February 24.