Advertisement
Home / World / Whatever happens in US, don’t blame booze

Whatever happens in US, don’t blame booze

For the first time in modern history, both major party candidates for the White House are teetotallers 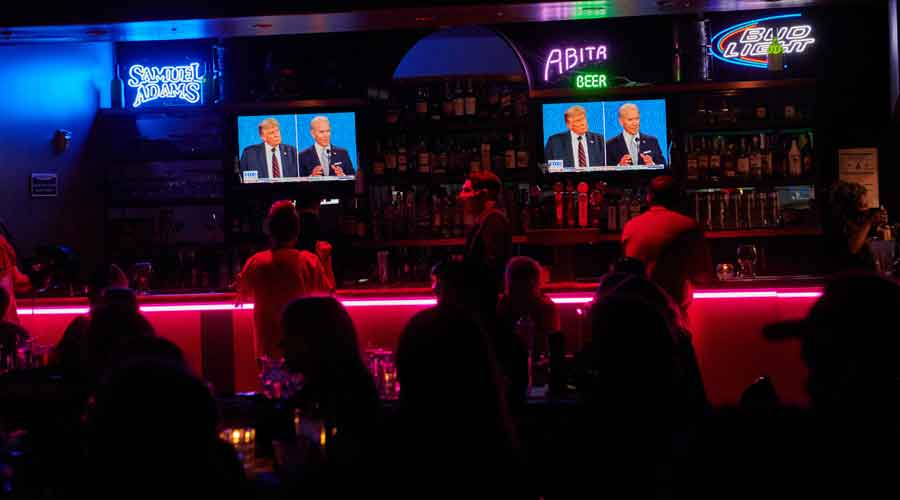 A presidential election that has driven a nation to drink is being fought to the bitter end by two men who do not.

For the first time in modern history, both major party candidates for the White House are teetotallers. President Donald Trump and his Democratic opponent, Joseph R. Biden Jr, have not had an alcoholic drink over the course of their lives, by their own accounts.

This Teetotaller Campaign, and the fact that this circumstance has drawn so little notice, is to some extent evidence of how the once hard-drinking culture of US politics is changing. Candidates, campaign aides and reporters are drinking less, aware of the scrutiny that comes in the age of cellphones and Twitter, not to mention the non-stop demands of a round-the-clock campaign.

But it also goes to the way Biden and Trump, for all their stark differences, share some similarities in character and background, according to biographers and others who have observed them over the years. They each grew up in families shadowed by the spectre of alcoholism — Trump’s brother died from it, and one of Biden’s favourite uncles, whom he lived with growing up, was a heavy drinker.

Both have distanced themselves from the boozy social circuits in Washington and New York, Biden because he was commuting home to his family in Delaware every night and Trump because he tends to be more comfortable at home watching television.

But more than anything, it is testament to the nature of two fiercely ambitious men, and their calculation that alcohol would put them at a disadvantage, be it in the world of politics or New York City development, or running a casino.

“These are two intensely competitive men who made a judgement early in their careers that their path to success is going to be willing themselves into the positions they wanted,” said Evan Osnos, the author of a just-completed biography of Biden. “That did not leave much room for getting drunk.”

It has been nearly a century since temperance had much bearing on American politics. The Prohibition Era began 101 years ago with ratification of the 18th Amendment to the Constitution and ended in 1933 with its repeal.

“There was a time in American public life when character was associated with a level of sobriety,” said Tim Naftali, a presidential historian. “I think that disappeared with the end of Prohibition.”

Biden and Trump rarely discuss their non-drinking ways, much less present their abstinence as any kind of virtue. Trump once joked about it as he noted he had never had a glass of alcohol in his life. “Can you imagine if I had?” he asked. “What a mess I would be.”

There have been US Presidents over the centuries who practised abstinence — Rutherford B. Hayes, William H. Harrison and George W. Bush — as well as Presidents who loved their cocktails, among them Richard M. Nixon, Lyndon Johnson and Martin Van Buren, or Blue Whiskey Van as he came to be known.

Bush stopped on his 40th birthday because he decided he was drinking too much, though his father, George H.W. Bush, was known to enjoy a martini at day’s end. Jimmy Carter kept a dry White House, which added to his reputation as being strait-laced (and no doubt sapped some of the fun out of state dinners).

But this candidate face-off has been a little disconcerting for some in Washington. The capital is a place where alcohol has always kept a firm grip, albeit not as firm as it once was, a fuel for deal-making, legislating and socialising.

“Two-thirds of Americans drink alcohol,” said Garrett Peck, who leads Temperance Tours of famous drinking spots in the nation’s capital and has written extensively about alcohol use in Washington. “And most Washingtonians drink alcohol as well. It’s part of the culture of the city.”

Alcohol is not as central to Washington life as it once was, Peck allowed, as he contemplated the shift in political culture that has led most members of Congress to head home on weekends. That cultural shift has often been blamed for the bitter partisanship on Capitol Hill, since weekend socialising across the aisles has all but disappeared.

Barack Obama, the then US President (right), Professor Henry Louis Gates Jr. (left) and Sergeant James Crowley toast at the start of their meeting in the Rose Garden of the White House on July 30, 2009. The meeting came to be known as the “beer summit”
File picture

Trump has over the years said the main reason he does not drink is that he witnessed his brother Fred struggle with alcoholism and later die from it. His brother’s drinking drew the disapproval of his father, which also made an impression on Trump, a son always striving for the approval of his strong-willed father, according to his biographers.

Gwenda Blair, who has written about Trump and his family, said the President realised early in his career that abstinence would give him an upper hand in the brutally competitive New York real estate development market. Later, as a casino owner in Atlantic City, he took note of the tradition of plying gamblers with free drinks to encourage them to abandon their inhibitions and stay close to the gaming table and slot machines.

“As they’re downing scotches, he’s downing Diet Cokes,” she said. “It’s part of his ultra-competitive profile. This is a guy who is so competitive that his high school coach said he was the most coachable kid he had ever coached because unlike most kids, Donald remembered what he needed to do to win.”

Biden is no less driven; he talked about becoming President as a young man, and this is the third time he has sought the office. He is also a man of self-discipline, as he has demonstrated in overcoming a stutter.

While Trump talks of losing his brother to alcoholism, Biden grew up in a house full of drinkers, notably his Uncle Edward, known as Boo-Boo. “There are enough alcoholics in my family,” he once said when asked why he did not drink.

Osnos said that Biden had made it clear “he believes there is a genetic component to this and that it runs in the family. It’s not a leap to also connect this to the struggles his son Hunter has had with addiction.”

Among the others on the two major party tickets this year, Vice-President Mike Pence does not drink alcohol either, leaving Senator Kamala Harris as the only one who has a drink sometimes.

By most accounts, Biden and Trump have never felt left out by not participating in the ritual of drinking.

Timothy L. O’Brien, another Trump biographer, said of the President, “I don’t think he cares.”

“He’s never been someone who enjoys going to a party and socialising,” O’Brien added. “His ideal night is sitting in front of a TV watching a sports event with a cheeseburger. That’s his bottle of wine.”

During his first term, President Barack Obama held a famous meeting to adjudicate a confrontation between Henry Louis Gates Jr, a Black Harvard professor, and the white Cambridge police officer who had arrested Gates at his home while investigating a report of a break-in at the residence.

It came to be known as the beer summit, because of what the men drank as they sat down under a magnolia tree across from the Oval Office.

Except for Biden. He had Buckler, a non-alcoholic beer from Heineken.

For all the talk about character in American politics, Naftali said that in this election, most voters probably do not care about the drinking habits of their presidential candidates.

“In the early 20th century, many voters would be delighted that both candidates were teetotallers,” he said. “I don’t think it matters at all in the 21st century. There are other and better ways to assess a nominee’s character.”