Biden, Harris vow a way out of crisis 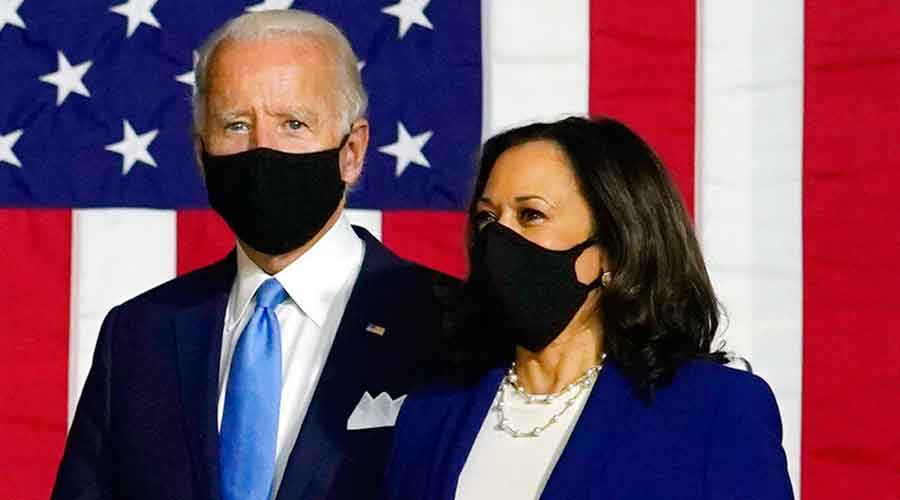 Joseph R. Biden Jr and Senator Kamala Harris made their debut as running mates in a high school gymnasium on Wednesday, pledging to lead the country out of the coronavirus crisis amid an onslaught of attacks from President Trump as the two national tickets went head-to-head for the first time, less than three months before Election Day.

The first full day for the newly announced Democratic presidential ticket offered a glimpse of how two once-bitter rivals from opposite coasts and different generations will try to unite Americans around their platform.

Projecting warmth towards each other, they sketched out a vision of recovery from the nation’s crises surrounding public health, the economy and racial injustice — challenges that, they argued, Trump has made worse at every turn with an extraordinarily divisive presidency.

“We need more than a victory on November 3,” Harris said. “We need a mandate that proves that the past few years do not represent who we are or who we aspire to be.”

Harris, a Californian who once served as attorney-general of the state, made clear that part of her campaign role would be demonstrating her skills as a prosecutor to build a case against Trump and Vice- President Mike Pence, methodically detailing what she cast as the administration’s failures in combating the coronavirus, reopening the economy and creating conditions under which schools could reopen safely this autumn.

“Let me tell you, as somebody who has presented my fair share of arguments in court, the case against Donald Trump and Mike Pence is open and shut,” Harris said.

Other contours of Harris’s role in the campaign also started coming into focus on Wednesday. A Biden adviser described Harris as well positioned to connect with black and latino voters across the country as well as with suburban women, saying that the campaign expected her presence on the ticket to drive turnout in Arizona, Florida and Texas in particular, as well as in communities of colour nationally.

People familiar with Harris’s plans said they expected her to be a major presence on the virtual fund-raising circuit, and she and Biden, the former Vice-President, held a grass-roots fundraiser on Wednesday night in an ornate ballroom of the Wilmington hotel where Biden announced his 1972 Senate candidacy. There, Biden announced that in the past 24 hours, the campaign had raised $26 million, with 150,000 first-time contributors.

More fundraisers according to invitations. And her feelers to key Democratic Party constituencies is also underway — an event with members of the Jewish community, for example, is in the works, according to people familiar with the planning.

Trump, who has unleashed sexist attacks on Harris, called her “a very risky pick” at a news conference as he referred to “horrible things” she had said about Biden during the primary campaign, suggesting those words would haunt the ticket. “I’m sure that’ll be played back,” Trump said. “Not necessarily by me, but others. It’ll be played back.”

Trump also defended his administration’s response to the virus, citing the number of tests that have been administered and bragging about the government’s efforts to ramp up production of ventilators to help gravely ill patients.

As Biden and Harris spoke on Wednesday before a group of socially distanced reporters — not the excited crowd of supporters that would normally greet such an occasion — they each nodded to the symbolism and historic nature of the moment. Wednesday was the third anniversary of the white supremacist rally in Charlottesville, Virginia, at which Trump claimed there were “very fine people on both sides”, Biden noted.