China said the US will bear unspecified consequences 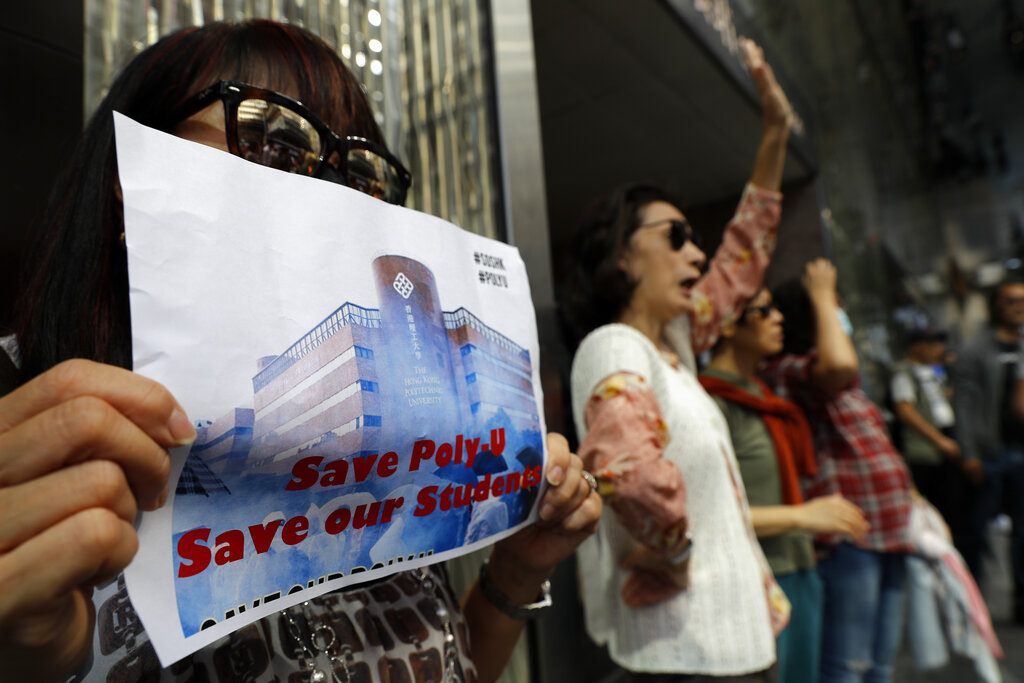 Office workers and pro-democracy protesters hold up their hands to represent their five demands wanted from the government as protests continue in Central district of Hong Kong, Wednesday, November 27, 2019
AP
AP   |   Beijing   |   Published 28.11.19, 07:00 AM

China reacted furiously to US President Donald Trump's signing of two bills on Hong Kong human rights and said the US will bear unspecified consequences.

A foreign ministry statement on Thursday repeated heated condemnations of the laws and said China will counteract. It said all the people of Hong Kong and China oppose the move.

It's still unclear, however, how China will respond exactly.

Trump signed the bills, which were approved by near unanimous consent in the House and Senate, even as he expressed some concerns about complicating the effort to work out a trade deal with China's President Xi Jinping.

'I signed these bills out of respect for President Xi, China, and the people of Hong Kong,' Trump said in a statement. 'They are being enacted in the hope that leaders and representatives of China and Hong Kong will be able to amicably settle their differences leading to long term peace and prosperity for all.'

Congress approved the bills last week following months of unrest in the semi-autonomous Chinese city. Before Wednesday's signing announcement, Trump would only commit to giving the measures a 'hard look.'

'The US side ignored facts, turned black to white, and blatantly gave encouragement to violent criminals who smashed and burned, harmed innocent city residents, trampled on the rule of law and endangered social order,' the statement said.

The laws' basic intent is to undermine Hong Kong's prosperity and stability along with the 'historical progress of the great rejuvenation of the Chinese nation.'

It called the measures 'extremely evil in nature and dangerous in motive.'

'We advise the US not to act incautiously, otherwise China will be required to counteract resolutely and all the consequences created by this will have to be borne by the US side,' the statement said.

The two countries are currently locked in a trade war and have deep differences over China's claims to the South China Sea and Taiwan, human rights issues and accusations of Chinese industrial espionage.

The munitions bill was passed unanimously, while Republican Rep. Thomas Massie of Kentucky was the sole House member to oppose the human rights bill.

Trump acknowledged last week that he was weighing the ramifications of signing the bill.

'Look, we have to stand with Hong Kong,' Trump said in an interview on Fox & Friends. He continued: 'But I'm also standing with President Xi. He's a friend of mine. He's an incredible guy.'

Democratic and Republican lawmakers applauded the signing of the bills. Sen. Robert Menendez, D-N.J., said it 'finally sends a clear and unequivocal message to the people of Hong Kong: We are with you.'

Sen. Jim Risch, an Idaho Republican and chairman of the Senate Foreign Relations Committee, said the bills are 'an important step forward in holding the Chinese Communist Party accountable for its erosion of Hong Kong's autonomy and its repression of fundamental human rights.'

Rep Chris Smith, R-N.J., who sponsored the House human rights bill, said Xi 'should understand that the US is not kidding about human rights. Beating, torturing and jailing of democracy activists is wrong and this historic legislation lets China know that respecting fundamental human rights is paramount.'

'I know that many people in Hong Kong are happy that the US government has passed a new bill,' said Figo Chan, a 23-year-old Hong Kong protester who was honored with the John McCain Prize for Leadership at the Halifax International Security Forum in Canada last weekend.

'No one wants to die and no one wants to be hurt,' Chan said. 'I hope that citizens of many different countries can in their own way fight for democracy.'