Much of the Northern Hemisphere is battling either wildfires, low water levels, harvest warnings, water use restrictions or a mixture of all these 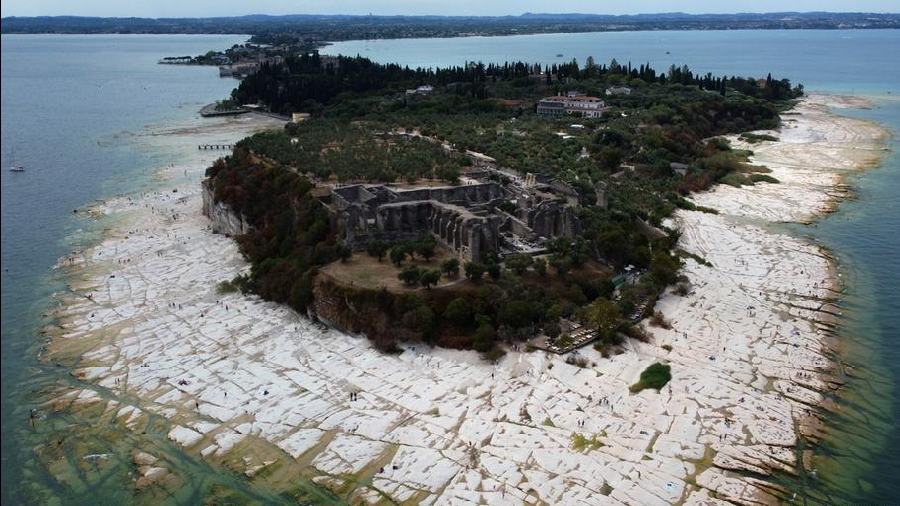 Around much of the Northern Hemisphere, from Hungary to Hawaii, from the drying Rhine River to the now-recovering Rio Grande, or from Casablanca to California, summer droughts and high temperatures are having a serious impact on everything from agriculture to the freight industry.

Here's a rundown of some of the latest drought-related developments from around the world.

The worst drought that Italy has experienced in a decade has reduced Lake Garda to its lowest level on record.

The water level has fallen so far that large areas of previously underwater rock have now been exposed.

Perhaps most strikingly, an expansive stretch of bleached rock could be seen around the shoreline of the southern Simione Peninsula.

"We came last year, we liked it, and we came back this year,'' tourist Beatrice Masi told the AP news agency. "We found the landscape had changed a lot. We were a bit shocked when we arrived because we had our usual walk around, and the water wasn't there."

There hasn't been significant rainfall for months in Northern Italy, and snowfall this year was down 70%, resulting in less meltwater. That's led to a drying up of important rivers like the Po, which flows across the country's agricultural and industrial heartland.

Due to low water level, the German container logistics company Contargo is suspending most of its inland shipping operations on the Upper and Middle Rhine.

Since no significant rainfall is expected in the coming days, the company expects the Kaub Gauge level to fall below 40 cm (15,7 inches) from this coming weekend.

"Then our barges will not be able to sail without danger, and for reasons of safety we shall have to largely discontinue our navigation on the Upper and Middle Rhine," Contargo said in a statement on the company's website.

The president of the German Farmers' Association, Joachim Rukwied, warned on Friday that without imminent rain, this year's harvests could be severely affected by the late-summer heat wave.

He added that the combined issues of inflation and the conflict in Ukraine were exacerbating the situation even for farmers in Western Europe, hundreds or thousands of kilometers from the front lines.

"At the moment we are fighting on many fronts," Rukwied told German news agency dpa. "Fertilizer prices are four times higher than they were a year ago. Energy prices are twice as high. Feed prices have risen."

Rukwied said that "if it does not rain thoroughly and soon, then we fear harvest yields could be reduced by as much as 30% or 40%."

The 2022 grain harvest was proceeding largely according to plan, Rukwied said, but crops harvested later in the year such as potatoes and sugar beet were at particular risk and might end up costing more as a result.

Rukwied also warned of the effect on farmers' own winter reserves. With grass in much of the country brown — "absolutely nothing is regrowing" — some farmers were already having to feed livestock from stocks set aside for winter, as they are unable to cut any fresh food from fallow fields.

Firefighters from six EU members started to arrive in France on Friday to help battle a series of wildfires, most notably a fierce blaze in the southwest that has forced thousands from their homes.

In total, 361 foreign firefighters have rushed to the aid of their French colleagues, the first contingent of 65 arriving from neighboring Germany.

In the southwestern Burgundy region, the Tille River in the village of Lux dried up completely, revealing thousands of dead fish in a wide trench.

France has been forced to impose various water usage restrictions nationwide during the summer.

The conditions are also affecting the nuclear-powered country's electricity supply. France's vast fleet of low-carbon nuclear power plants rely on river water for cooling, and several plants have had to be shut down as a result. France has taken the unusual step of importing electricity from its neighbors, and its baseload electricity price hit a record high earlier in the week.

Water levels on the Danube River have been dipping toward critical levels in recent weeks, while parts of Lake Velence, to the southwest of Budapest, dried up entirely this week (see image at top of article).

The deputy governor of Hungary's central bank, Barnabas Virag, has warned that the lengthy period of drought, coupled with the impact of the war in Ukraine on global food supply, could push food prices higher in the coming months and exacerbate the existing inflationary pressures facing the country.

Amid its driest spell of weather in well over a century, the UK is introducing a hosepipe ban in some parts of the country, while the source of the River Thames is experiencing an unprecedented lack of water.

Meanwhile, the British government said that parts of southern, central and eastern England had officially moved into drought status.

The Met Office — the UK's national weather service — has already declared last month the driest for England since 1935, with average rainfall at 23.1 millimeters (0.9 inches), while some regions experienced their driest July ever.

Fires that have scorched tens of thousands of hectares of wooded areas in France, Spain and Portugal have made 2022 a record-breaking year for wildfire activity in southwestern Europe, the EU's Copernicus Atmosphere Monitoring Service (CAMS) said Friday.

Amid a heatwave that saw temperature records set across the continent, the bloc's satellite monitoring service said that France had in the last three months reached the highest levels of carbon pollution from wildfires since records began in 2003.

It comes in the wake of Spain registering its highest ever wildfire carbon emissions in July.

A wildfire in a rural part of Hawaii's Big Island is not yet threatening residential- areas, but high winds and dry conditions are making it difficult for fire crews to contain the blaze.

The fire started in the western reaches of the United States Army's Pohakuloa Training Area, which is above the town of Waikoloa and in between the volcanoes of Mauna Loa and Mauna Kea.

As of Thursday, the blaze had scorched more than 15 square miles (roughly 39 square kilometers) of land.