Second key suspect behind violence in Bangladesh against Hindus arrested

The accused had gone live on Facebook, which incited people and triggered a wave of unrest 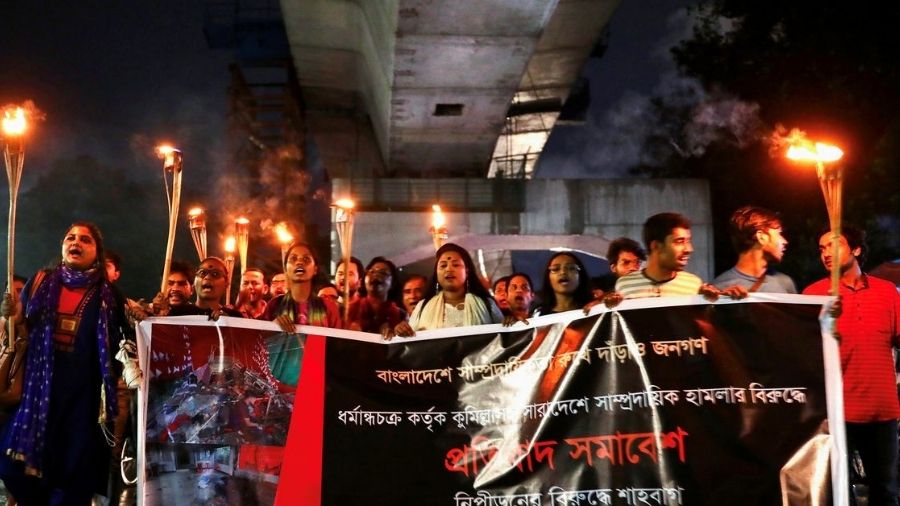 Bangladesh's security agencies on Saturday arrested a man in his 30s, who is believed to be the second key suspect behind the recent slew of violence against Hindus and mob attacks on temples in Bangladesh during the Durga Puja festivities, police officials said.

Shaikat Mandal, one of the masterminds behind the October 17 mayhem in Pirganj sub-district of northwestern Rangpur, and his accomplice was arrested from Gazipur, on the outskirts of Dhaka on Saturday, Elite anti-crime Rapid Action Battalion (RAB) officials said.

Mondol had gone live on Facebook, which incited people and triggered a wave of violence, a RAB official said.

At least 70 houses and shops of the Hindus were torched in attacks at Pirganj following Mandal's Facebook post on October 17.

Mandal's arrest comes a day after police had nabbed Iqbal Hossain, 35, the key suspect from Cox Bazar area, and the man who had allegedly placed the Quran at a Durga Puja venue in Cumilla.

Hossain is currently placed under a seven-day police remand as other security and intelligence agencies would join to interrogate him.

So far, police have arrested nearly 600 people from various parts of the country for inciting violence against the Hindus during the Durga Puja festivities.

In a related development, Mohammad Fayez, who was charged under Bangladesh's Digital Security Act (DSA) for inciting people via social media was sent to jail on Friday evening, the Daily Star newspaper reported.

Meanwhile, members of minority religious communities staged a mass-hunger and sit-in demonstration at central Dhaka's Shabagh area and other parts of the country under the banner of Bangladesh Hindu-Buddhist-Christian Unity Council.

Several thousand people have joined the mass-hunger and sit-in protests in Dhaka's Shabagh, Andarkilla of south-eastern port city of Chattogram and other parts of the country, Council's joint secretary Monindra Kumar Nath told the media.

Nath said a large number of social and cultural groups and followers of the Islamic faith have also joined the rallies to express their solidarity with the members of the minority communities.

The attacks on the Hindus in Bangladesh have been widely condemned by the United Nations.

Mia Seppo, the UN's resident coordinator in Bangladesh, said in a Twitter post on Monday that the attacks on Hindus are against the values of the Bangladesh constitution and need to stop.

The Foreign Ministry in a statement underlined that the Government of Bangladesh "unequivocally condemned those incidents and took serious note of the reactions from within and outside the Hindu community."

Hindus constitute around 10 per cent of Muslim-majority Bangladesh's 169 million population.