In addition to the widespread Russophilia in Belgrade, one also encounters a deep aversion to everything that comes from the former Soviet Union 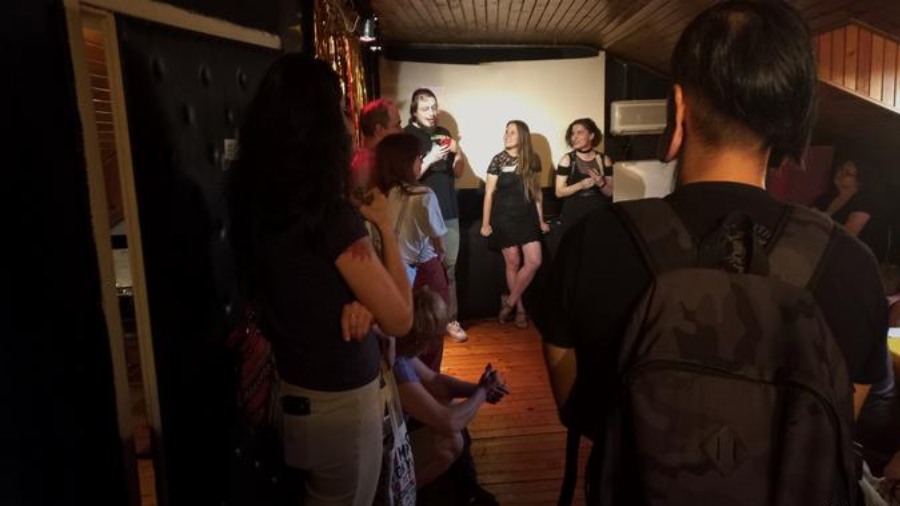 The Krov community center is located in a narrow top-floor apartment in central Belgrade. The wood-covered main room is reminiscent of West German party cellars from the 1970s. Normally, it's a hub for activists from the Serbian capital's cultural scene. Today, about 30 young women and men sit on folding chairs in front of an improvised stage. They're speaking Russian. Anyone who wants to can take the microphone and get on stage to sing.

"I arrived here from Moscow in April on a one-way ticket for me, my staff and my cat," Ilya Piksner, who organized the open-mic meeting, told DW. Together with some actors, he runs a recording studio that produces audio content ranging from music to advertisements. "Since the attack on Ukraine on February 24, the situation in Russia has become increasingly unbearable," Piksner said. "We just had to get out of there."

Right after the invasion, Piksner and his colleagues at the company's headquarters in Moscow used Telegram and other messenger services to help Ukrainians threatened by the war.

"For example, one of us taught a young girl how to drive a car via chat so she could take her family out of a combat zone. Her mother had a panic attack, so she couldn't drive herself," Piksner said. Such activities are considered treason in Vladimir Putin's Russia, and traitors can face prison sentences of several years.

Still, doing nothing about the war on Ukraine was out of the question for Piksner. "This conflict is very, very close to me," he said. "Many of my friends and colleagues are from Ukraine, their relatives live there, some even have Ukrainian passports. I have to help these people somehow."

But, after just a few weeks, it became clear that such actions were too risky in Russia. "We became ever more scared that someone would knock on our door at some point. The regime had already become increasingly aggressive since the annexation of Crimea in 2014,” Piksner said. "Clearly, that's going to get worse now that Putin is waging war."

Serbia's government has condemned Russia's invasion of Ukraine, but it does not support the sanctions against the Kremlin. Many Serbs feel a connection with Russia because of their related Slavic languages and shared Orthodox religion, and Putin's war on Ukraine has supporters even in the political mainstream.

An estimated 30,000 to 50,000 Russians have moved to Serbia since the end of February. There are no official figures, but, since the start of the war against Ukraine, tens of thousands of Russians have opened accounts in Serbian banks.

And more than 1,000 companies whose owners have Russian passports have registered with the Chamber of Commerce and Industry of Serbia, most of them in the IT sector.

"I chose Serbia because it is one of the few countries where Russian passport holders are still allowed to enter without a visa," Katya Khazina, a 34-year-old from Moscow, told DW. "Apart from that, of course, it's quite schizophrenic that, as an opponent of Putin, I ended up in a country where there are many people who support the regime in Russia," Khazina said. "But I'm putting up with it because I know it's nothing compared to the difficulties that people who are fleeing the fighting in Ukraine have to cope with."

In Russia, Khazina worked at a feminist publishing house. For years, she regularly protested the Putin regime. In Belgrade, she has joined the NGO Women in Black, which took a stand against the wars in Yugoslavia back in the 1990s.

Since late February, the group has also opposed Russia's invasion of Ukraine. Putin's Serb supporters, on the other hand, hold regular demonstrations in favor the war.

"Serbs have a strange relationship with Russia," Khazina said. Few people in Serbia learn Russian; most have never traveled to Russia.

"Serbs also don't know the prejudices many Russians have against them," Khazina said, "that, when they deliver food, for example, the Russians see them as very slow workers who live at a a very low standard."

Khazina said the love many Serbs profess for Russia was based primarily on "ignorance about life in Russia, not to mention the extent of the repression, the brutality that the Russian regime carries out both in Ukraine and against its own citizens, or how massive the propaganda is."

Khazina also doesn't think much of many of her fellow Russians in Belgrade. "At our protest events, just 50 to 100 of the tens of thousands of Russians in Belgrade regularly show up," she said. "Most Russians have come to Serbia because Spotify and Netflix no longer work back home," she added. "There are many apolitical people among them."

The Facebook group Russians, Ukrainians, Belarusians and Serbs Together Against the War has 3,624 members.

"But that doesn't mean anything," said the group's founder, Peter Nitkin. "Most of the people in our group are Serbs or come from the other countries in the Western Balkans region." The aim of the Facebook group, he said, is to inform Serbs about activities against the war in Ukraine in which Russians are involved. Nikitin calls it "counterpropaganda."

In addition to the widespread Russophilia in Belgrade, one also encounters a deep aversion to everything that comes from the former Soviet Union.

A server at the Mala Slavija restaurant, for example, said he hated Russians and Ukrainians in equal measure. "They have no manners and think that, because they have money, they can get away with anything," he said. He was unwilling to differentiate, saying his views apply to all people from post-Soviet states in Serbia.

Many Serbs are also upset that the new arrivals from Russia have further strained the tight rental market. Most people bought their apartments after the end of the Communist period and live in them themselves. Even before the war in Ukraine began, affordable housing was scarce in belgrade.

The Serbian tabloid Blic ran a lurid headine in April: "Are the Russians occupying Belgrade?" The article reported that "Russians are buying apartments and weekend houses and don't care about the price.”

Real estate agents say rents in some part of Belgrade have doubled since Russia invaded Ukraine.