As if the coronavirus taught us no lessons about the world being a global village. The consequences of Russia’s invasion of Ukraine have gone global. The writer takes quick stock 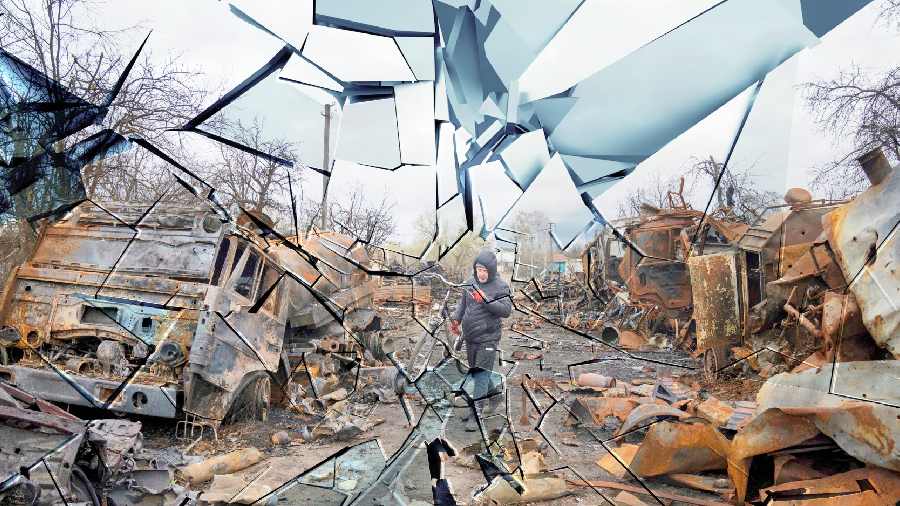 This story can begin any place, with anything. Let’s begin with Egypt then. It does not have enough wheat for its staple bread, or aish, given that 80 per cent of its wheat imports come from Russia and Ukraine. The north African country has had a tough Ramzan and frugal iftars. For the coming months, the government is trying to incentivise local farmers to grow wheat but water scarcity is a challenge. While a leading Egyptian pasta-maker is experimenting with rice, corn and lentil flour, in neighbouring Tunisia bakers are using semolina; bread queues have gotten longer and bread loaves, smaller. In Sudan, just below Egypt, many bakeries have shut shop and those still functioning are being encouraged to use tubers such as cassava and yams instead of wheat.

About 30 per cent of the 100 million eggs imported into Israel every year are from Ukraine. Eggs are integral to the country’s diet, so now the government is looking at expensive options, such as Poland, Bulgaria, Spain and Italy, for supplies. Japan’s soba noodles, made from buckwheat, are the other war casualty as are fish and chip shops in the United Kingdom — they are closing down one after another. After all, Russia supplied 30 to 40 per cent of UK’s cod and haddock, while its vegetable oil came from Ukraine. And in France, pigs and other livestock could go hungry given the rising price of feed. Farmers there depend on wheat and barley imports from Russia and Ukraine but the war has paused shipments.

The multi-million dollar orchid industry of Thailand — it is the biggest exporter of orchids in the whole world — already battered by the pandemic and repeated lockdowns in prime buyer China, is now flailing as pesticide and fertiliser prices are up because of the war. Russia is the world’s largest exporter of fertiliser. The same shadow looms over the flower producing countries Kenya and Ethiopia — they export to Europe — but so far, given high demand, business has been booming. Needless to say, roses and carnations are selling at higher prices. Speaking of fertilisers, farmers in Brazil are using less fertiliser for their corn crop. In the US, they are planting less corn as it is too fertiliser-intensive. In Zimbabwe and Kenya, small farmers are going back to manure. And some French researchers have chosen this time to announce that they may have found a unique natural alternative to chemical fertilisers in... human urine. India has got stock from Canada, Jordan and Israel, but the high costs are affecting rice farmers. In fact, if the situation persists, rice farmers — who are more vulnerable — across Asia will be impacted and the hunger pangs will be felt across the globe.

European Union countries are expected to lose three million Russian tourists in the coming months. So will Cyprus (in the Mediterranean) and Latvia (in the Baltic region). Poland will suffer and Turkey too. The Turkish government has just launched a charter carrier to Russia, and Turkish Airlines and Pegasus Airlines are offering two million seats on direct flights from Russia to Turkey. But these projections are still way below expected footfall in the prewar scenario. Thailand, Indonesia, Vietnam, Maldives and India are also worried. In recent times, Ukraine had become a popular shooting destination with Indian filmmakers, but that is bound to change now. And, eager to holiday Russians are headed for southern neighbour Kazakhstan. Russian travel agencies are calling it the “new Turkey”.

The war has also altered the demographic of many countries. Around 5.3 million people have fled Ukraine to the bordering countries to its west — Poland, Hungary, Czech Republic, Slovakia and the Baltic states. Russians have left for Georgia, Armenia and Turkey. China, for all its pro-Kremlin talk, is not immune. Its exports to Russia have fallen by 25.9 per cent. Chinese drone maker and market leader Da-Jiang Innovation suspended operations in Ukraine and Russia. PC maker Lenovo and smartphone and gadget maker Xiaomi had reportedly stopped supplies to Russia. But Russian media has denied this. Production of cellphones, laptops and cars is in jeopardy as the Ukrainian companies Ingas and Cryoin have stopped production of semiconductor-grade neon, which is used to make chips integral to mobile, computer and auto technology. Russia supplied nearly 40 per cent palladium, a rare metal used to create semiconductors, to the US, jeopardising that apple cart. German car-makers, Volkswagen, BMW, Porsche, who imported a significant volume of Ukraine-built wiring harnesses are no less worried. In the meantime, Yazaki and other Japanese auto suppliers are setting up production bases in north Africa.

India depends on Russia for nickel used to manufacture cycles. Another item is newsprint, 45 per cent of which also comes from Russia. For its part, India supplies hosiery to Russia via Ukraine, but you know where that story is stuck. There have been reports that Pakistan is staring at depleted stocks of diesel — once again Russian bottleneck. Bangladesh’s Bangabandhu Satellite-2 launch is on hold. And it is safe to say that the Russia-Ukraine tension added more blows to an already beleaguered Sri Lanka.

Europe is running out of pallets — flat wooden structures used to move heavy goods using fork-lift trucks — and the materials used to make them. Most of it came from Ukraine, Russia and Belarus. There are not enough nails to go into pallets either. Poland and eastern Europe produce nails but the steel comes from Russia.

A shortage in timber Russia has the Japanese housing sector hammered. Tajikistan, which is the poorest Central Asian country, depends on remittances from its people working as migrant labourers in Russia. But the devaluation of the ruble, smaller salaries, expensive housing and work permits will now lead to a fall in remittances — a 22 per cent fall according to a March World Bank report. Big deal in a country where remittances make up 26.7 per cent of the GDP.

Even the Arctic is not untouched. The Arctic Council was formed in 1996 keeping in mind scientific research, search, rescue operations and fallout of climate change. The eight countries constituting the council are Canada, Denmark, Finland, Iceland, Norway, Sweden, Russia and the US. It was even nominated for the Nobel Peace Prize this year for its collaborative spirit. Then the war happened and the other seven countries announced that they would be “temporarily pausing participation”. The war has also spelt trouble for the western Asian nation of Armenia vis-a-vis neighbour Azerbaijan.

To cut a long and complicated story short, Russia was perceived as Armenia’s “security guarantor” and now with Russia busy fighting a far bigger battle, Armenians are experiencing an incursion too many… And so it continues, the un-grand unravelling.