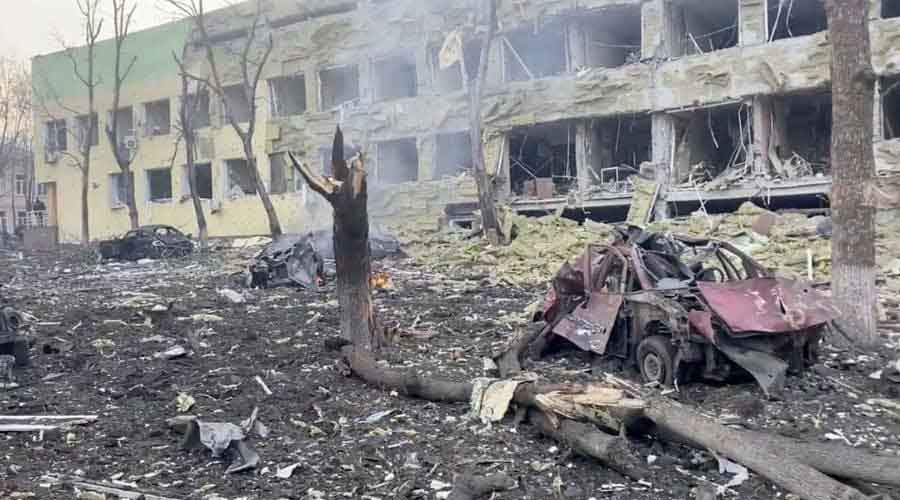 Russia is pounding the besieged Ukrainian port of Mariupol into the "ashes of a dead land", its local council said on Tuesday, describing two more huge bombs that fell on the city that has been sealed off for weeks.

The plight of Mariupol, a city of 400,000 before the war, has been the most urgent humanitarian emergency since Russia invaded Ukraine nearly a month ago. Hundreds of thousands of residents are believed to be trapped inside under near constant shelling, with no access to food, water, power or heat.

"There is nothing left there," President Volodymyr Zelenskiy said in a video address to the Italian parliament on Tuesday.

The city council gave no details of casualties or damage from the latest bombing. No independent journalists have been operating inside the Ukrainian-held parts of the city for at least a week, during which Ukraine says Russia struck a theatre, an art school and other public buildings, burying hundreds of women and children sheltering in cellars.

"Once again it is clear that the occupiers are not interested in the city of Mariupol. They want to level it to the ground and make it the ashes of a dead land," the council said in a statement.

Russia denies targeting civilians. Ukraine says Moscow has blocked daily efforts to send in relief convoys with food and other supplies for civilians, or buses to bring them out.

Russia demanded the city surrender by dawn on Monday, an ultimatum that Kyiv defied.

"We demand the opening of a humanitarian corridor for civilians," Ukraine's Deputy Prime Minister Iryna Vereshchuk said on Ukrainian television on Tuesday. "Our military are defending Mariupol heroically. We did not accept the ultimatum. They offered capitulation under a white flag. This is manipulation, a lie."

Russia calls the biggest invasion in Europe since World War Two a "special military operation" to disarm Ukraine and protect it from "Nazis". The West calls this a false pretext for an unprovoked war.

Mariupol is the biggest city still held by Ukraine in the Donetsk region, which Russia has demanded Kyiv cede to Moscow-backed separatists. Russian media quoted a separatist official on Tuesday as saying half of Mariupol was now captured.

A part of Mariupol now held by Russian forces, reached by Reuters on Sunday, was an eerie wasteland of charred apartment blocks. Bodies wrapped in blankets lay by a road. A group of men dug graves in a patch of grass.

Kyiv accuses Moscow of illegally deporting residents of Mariupol and separatist-held areas of Ukraine to Russia. Ukrainian Prosecutor General Iryna Venediktova said Kyiv was investigating the "forcible transfer" of 2,389 children to Russia from the Luhansk and Donetsk regions.

In a tweet, the U.S. embassy called that "kidnapping".

Moscow denies forcing people to leave, saying it is taking in refugees.

Ukraine also accused Russia of blocking humanitarian access to Kherson, the only provincial capital it has captured. Ukraine's Foreign Ministry said its 300,000 residents were running out of food.

Steve Gordon, humanitarian response adviser at international aid agency Mercy Corps, described convoys of cars that were able to leave Mariupol in the past week.

"The cars are all taped together with duct tape and plastic, packed with 7-8 people in each car. Many of the cars say 'child' on the window in the hopes that this would prevent them from being attacked," he said.

The conflict has forced nearly a quarter of Ukraine's 44 million people from their homes, including more than 3.5 million refugees who have fled the country, half of them children, in one of the fastest exoduses ever recorded.

Ukraine, with rich black soil, is one of the world's biggest exporters of grain, and the war has caused global prices for staple foods to surge to record levels.

"The most terrible thing will be the famine that is approaching for some countries," Zelenskiy said in his speech to Italian lawmakers. "Ukraine has always been one of the largest food exporters, but how can we sow (crops) under the strikes of Russian artillery?"

Within Russia, independent media have been effectively shut down, and referring to the "special operation" as a war or invasion is banned.

A Russian court imposed a new nine-year sentence on Tuesday on Alexei Navalny, Putin's main political opponent, who was already in jail. As soon as the sentence was handed down, two of Navalny's lawyers were briefly detained.

But there are some signs of dissent. One of the best-known Russian state TV news personalities, Zhanna Agalakova, a foreign correspondent and former Channel One news reader, announced at a news conference in Paris on Tuesday that she had quit in protest against the war.

Dmitry Muratov, who won the Nobel Peace Prize in December for fighting for free speech as editor of Novaya Gazeta, one of Russia's last independent newspapers, announced he would auction his medal to raise money for Ukrainian refugees.