Principles of territorial integrity and sovereignty, international law, human rights, must always be defended no matter where they are violated in the world: US President 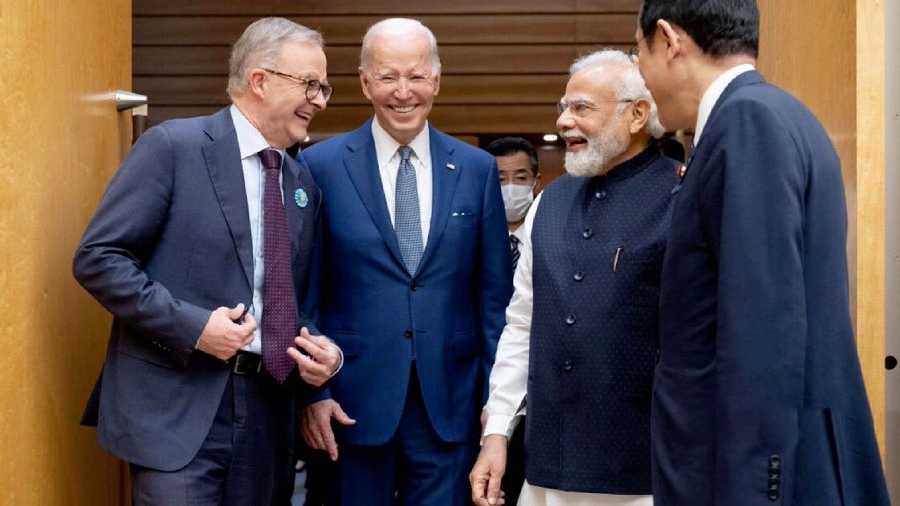 Divergent views among the Quad leaders over the Ukraine crisis were visible at a summit of the grouping on Tuesday
Twitter/@jjjove
Our Bureau, PTI   |   Tokyo   |   Published 24.05.22, 07:45 PM

Divergent views among the Quad leaders over the Ukraine crisis were visible at a summit of the grouping on Tuesday even as US President Joe Biden said Russia's "brutal and unprovoked" war against that country triggered a "humanitarian catastrophe".

While the US President made a hard-hitting attack on Russia for the war in Ukraine, a joint statement issued at the end of the summit did not reflect such a strong position as it said the leaders discussed their respective responses to the conflict and the ongoing "tragic" humanitarian crisis and assessed its implications for the Indo-Pacific.

"With the COVID-19 pandemic still inflicting human and economic pain around the world, tendencies for unilateral actions among states and a tragic conflict raging in Ukraine, we are steadfast," it said.

"We strongly support the principles of freedom, rule of law, democratic values, sovereignty and territorial integrity, peaceful settlement of disputes without resorting to threat or use of force, any unilateral attempt to change the status quo, and freedom of navigation and overflight, all of which are essential to the peace, stability and prosperity of the Indo-Pacific region and to the world," the joint statement said.

While Biden and Japanese Prime Minister Fumio Kishida attacked Russia for its invasion of Ukraine, Prime Minister Narendra Modi and his newly-elected Australian counterpart Anthony Albanese chose not to comment on the conflict in their opening remarks.

"We are navigating a dark hour in our shared history. The Russian brutal and unprovoked war against Ukraine has triggered a humanitarian catastrophe. And innocent civilians have [been] killed in the streets, and millions of refugees are internally displaced as well as exiled," the US President said.

"And this is more than just a European issue; it's a global issue. The fact is that what -- if you turn on the television and you'll see what Russia is doing now, it appears to me that Putin is just trying to extinguish a culture," he said.

"He is not even aiming at military targets anymore; he's taking out every school, every church, every every natural history museum as if to try to obliterate the Ukrainian culture. And the world has to deal with it, and we are," he added.

Biden said the principles of "territorial integrity and sovereignty, international law, human rights, must always be defended no matter where they are violated in the world."

The US President also said the global food crisis is made worse by "Russia's blocking Ukraine from exporting its millions of tons of grain."

"And also, as long as Russia continues the war, the United States will work with our partners to help be the global response, because it's going to affect all parts of the world," he said.

In his comments, Kishida said the Russian invasion of Ukraine "squarely challenges" the principles which are enshrined in the United Nations Charter.

"We should never, ever allow a similar incident to happen in the Indo-Pacific. Because of the harsh reality unfolding, it is extremely significant for us to get together and show to the international society the four countries' solidarity and our firm commitment toward the shared vision of a free and open Indo-Pacific," he said.

In his opening remarks, Albanese talked about the challenges of climate change and that the new Australian government's priorities align with the Quad agenda.

Prime Minister Modi spoke about how mutual trust and determination among Quad countries is giving new energy and enthusiasm to the democratic forces.

He did not touch upon the Ukraine crisis in his opening remarks.

Unlike its Quad partner countries, India has not yet condemned the Russian attack on Ukraine and it has been pressing for an immediate cessation of violence and a resolution of the crisis through diplomacy and dialogue.