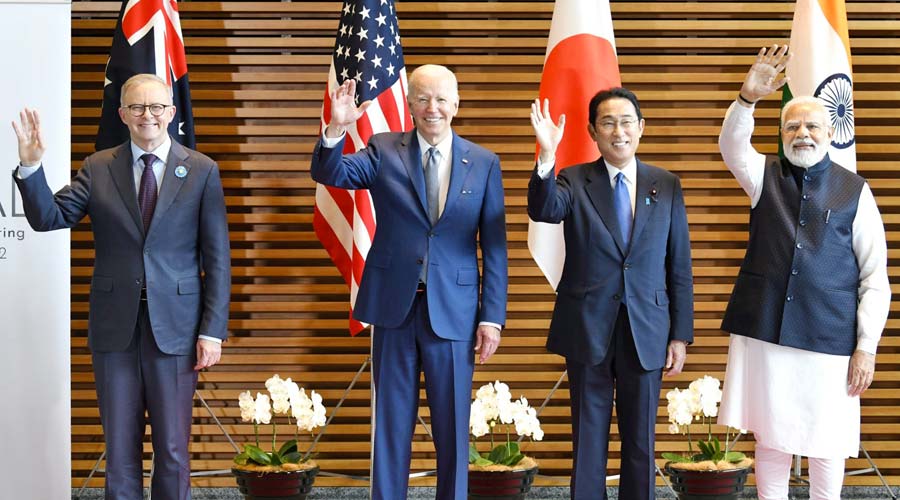 In a clear message to an aggressive China, the leaders of the Quad grouping, including Prime Minister Narendra Modi and US President Joe Biden, on Tuesday expressed their firm opposition to "any provocative or unilateral attempt" to change the status quo and called for peaceful settlement of disputes without resorting to threat or use of force.

"We strongly oppose any coercive, provocative or unilateral actions that seek to change the status quo and increase tensions in the area, such as the militarisation of disputed features, the dangerous use of coast guard vessels and maritime militia, and efforts to disrupt other countries' offshore resource exploitation activities," said a joint statement issued after the meeting.

The summit took place at a time when the relations between China and the Quad member countries have become tense, with Beijing increasingly challenging democratic values and resorting to coercive trade practices.

The relations between India and China nose-dived after the Eastern Ladakh standoff in 2020 following Beijing moving thousands of troops to several disputed areas along the Line of Actual Control (LAC) which was strongly objected to and resisted by New Delhi.

In March, India pressed China hard to complete the disengagement process in the remaining friction points in eastern Ladakh quickly during the visit of Chinese Foreign Minister Wang Yi to New Delhi, asserting that bilateral ties cannot return to normal if the situation in the border areas is "abnormal".

In February, External Affairs Minister S Jaishankar had said that India's relationship with China is right now going through a "very difficult phase" after Beijing violated agreements not to bring military forces to the border.

China also claims nearly all of the disputed South China Sea, though Taiwan, the Philippines, Brunei, Malaysia and Vietnam all claim parts of it. Beijing has built artificial islands and military installations in the South China Sea.

In the joint statement, the four leaders said the Quad will champion adherence to international law, particularly as reflected in the UN Convention on the Law of the Sea (UNCLOS), and the maintenance of freedom of navigation and overflight, to meet challenges to the maritime rules-based order, including in the East and South China Seas.

"We strongly support the principles of freedom, rule of law, democratic values, sovereignty and territorial integrity, peaceful settlement of disputes without resorting to threat or use of force, any unilateral attempt to change the status quo, and freedom of navigation and overflight, all of which are essential to the peace, stability and prosperity of the Indo-Pacific region and to the world," it said.

They reaffirmed the grouping's resolve to uphold the international rules-based order where countries are free from all forms of military, economic and political coercion.

The Quad leaders also discussed their respective responses to the conflict in Ukraine and the ongoing tragic humanitarian crisis, and assessed its implications for the Indo-Pacific.

"We underscored unequivocally that the centerpiece of the international order is international law, including the UN Charter, respect for sovereignty and territorial integrity of all states. We also emphasised that all countries must seek peaceful resolution of disputes in accordance with international law," the joint statement said.

It said Quad is committed to cooperation with partners in the region who share the vision of a free and open Indo-Pacific.

"We reaffirm our unwavering support for ASEAN unity and centrality and for the practical implementation of ASEAN Outlook on the Indo-Pacific. We welcome the EU's Joint Communication on the EU Strategy for Cooperation in the Indo-Pacific which was announced in September 2021 and increased European engagement in the Indo-Pacific region," it said.

The Quad leaders vowed to further strengthen cooperation with Pacific island countries, to enhance their economic well being, strengthen health infrastructure and environmental resilience, to improve their maritime security and sustain their fisheries.

They agreed to deepen cooperation in multilateral institutions, including at the United Nations and said individually and together, they will respond to the challenges of the time, ensuring that the region remains inclusive, open, and governed by universal rules and norms.

The Quad leaders condemned North Korea's "destabilising" ballistic missile development and launches in violation of UN Security Council Resolutions and reaffirmed their commitment to the complete denuclearisation of the Korean Peninsula.

On Myanmar, they voiced concern over the crisis and called for the immediate end to violence in the country, release of all political detainees, including foreigners, and the swift restoration of democracy.

The grouping also condemned unequivocally terrorism and violent extremism in all its forms and manifestations and reiterated that there can be no justification for acts of terror on any grounds whatsoever.

"We denounce the use of terrorist proxies and emphasise the importance of denying any logistical, financial or military support to terrorist groups which could be used to launch or plan terror attacks, including cross-border attacks," the statement said.

"We reiterate our condemnation of terrorist attacks, including 26/11 Mumbai and Pathankot attacks. We also reaffirm UNSC Resolution 2593 (2021), which demands that Afghan territory must never again be used to threaten or attack any country or to shelter or train terrorists, or to plan or finance terrorist attacks," it said.

"We emphasise the importance of upholding international standards on anti-money laundering and combating the financing of terrorism by all countries, consistent with FATF recommendations. We reaffirm that in our fight against global terrorism, we will take concerted action against all terrorist groups, including those individuals and entities designated pursuant to the UNSC Resolution 1267(1999)," it added.