Seven reporters, including three from Kyiv, have been killed since Russia launched a full-scale invasion of its neighbor on February 24 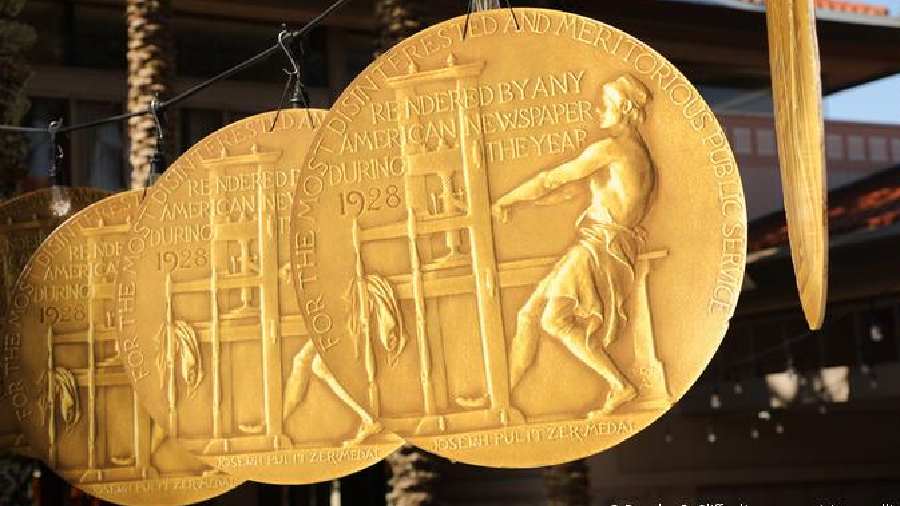 The winner of the public service award receives a gold medal, while winners of each of the other categories get $15,000
Deutsche Welle
Published 10.05.22, 06:44 PM

Columbia University unveiled its Pulitzer Prizes on Monday, considered the most prestigious journalism awards in the US.

The 2022 #Pulitzer Prizes were announced today at 3:00 p.m. EDT. Read the full list of winners and finalists (including winning and nominated work in Journalism) at https://t.co/uTTbOAw5yv.

On top of the usual prizes, the board issued a "special citation" to Ukrainian journalists covering Russia's invasion of their country.

"The Pulitzer Prize board is pleased to award a special citation to the journalists of Ukraine for their courage, endurance and commitment to truthful reporting during Vladimir Putin's ruthless invasion of their country and his propaganda war in Russia," said board member Marjorie Miller, announcing the prize.

"Despite bombardment abductions, occupation and even deaths in their ranks, they have persisted in their effort to provide an accurate picture of a terrible reality, doing honor to Ukraine and to journalists around the world," she added.

Seven journalists, including three from Ukraine, have been killed since Russia launched a full-scale invasion of its neighbor on February 24, according to the Committee to Protect Journalists.

For public service journalism the prize went to The Washington Post for its coverage of the January 6, 2021 insurrection at the US Capitol.

The newspaper's extensive reporting, published in a sophisticated interactive series, found numerous problems and failures in political systems and security before, during and after the January 6, 2021, riot in the newspaper's own backyard. The insurrection also garnered an award for Getty Images, which won one of two prizes awarded in breaking news photography.

Another photography award went to Adnan Abidi, Sanna Irshad Mattoo, Amit Dave and the late Danish Siddiqui of Reuters, for their feature photography of the deadly wave of the delta COVID-19 variant in India.

The Pulitzer Prizes often honor smaller, local newsrooms, and this year was no different. The Tampa Bay Times won the investigative reporting award for "Poisoned,'' its in-depth look into a polluting lead factory.

Editor and Tampa Bay Times vice president Mark Katches called his newspaper's win "a testament to the importance of a vital local newsroom like the Times.''

Prizes are also awarded in culture categories, including fiction, which this year went to Joshua Cohen's "The Netanyahus," a satirical novel centering on former Israeli Prime Minister Benjamin Netanyahu's father seeking a job in academia.

James Ijames' "Fat Ham,'' an adaptation of Shakespeare's "Hamlet'' set at a Black family's barbecue in the modern southern US, received the Pulitzer for drama. The music award went to Navajo composer and performer Raven Chacon for his composition for organ and ensemble, "Voiceless Mass."

Other winners included The Miami Herald for its coverage of the Surfside condo collapse, and Jennifer Senior of The Atlantic won the award for feature writing, for a piece marking the 20th anniversary of the 9/11 attacks through a family's grief.