Pope Francis wants to draw attention to the suffering of Indigenous people. But will he also take responsibility? 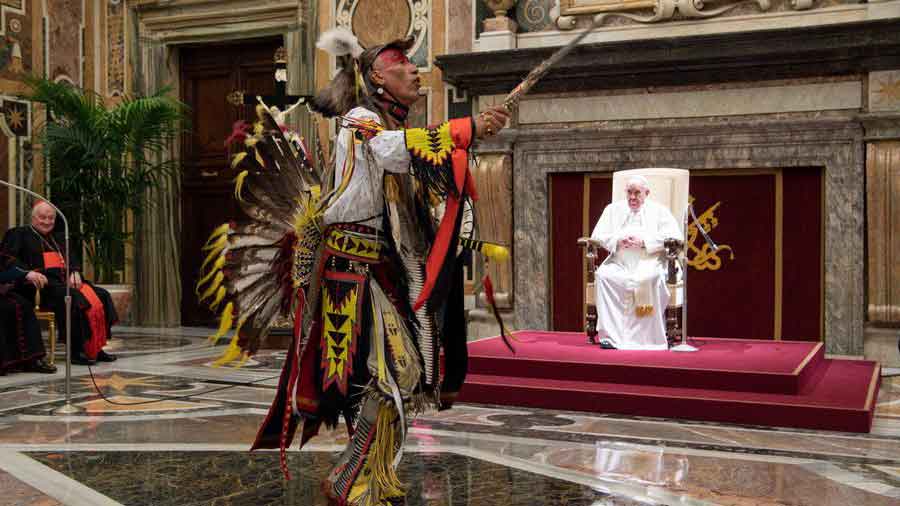 Pope Francis' 38th trip abroad takes him to Canada. He wants to "meet and embrace" Indigenous people and draw attention to their suffering, to which the Catholic Church contributed. But will he also take responsibility?

"We expect an apology from Pope Francis," 64-year-old Evelyn Korkmaz told DW, looking ahead to the Catholic Church leader's visit to Canada, which begins Sunday.

More than 50 years ago, Korkmaz experienced suffering at the hands of the Catholic Church. Her plight was shared by tens of thousands of children of the First Nations, Canada's Indigenous people.

As a 10-year-old, Evelyn Korkmaz enrolled at St. Anne's Residential School in Fort Albany in the north of Ontario, close to several First Nation reservations. There, she endured four years of abuse. There was, she remembers, "an electric chair" at her school and children were put in straitjackets. They experienced abuse, rape and even death.

For a number of years, new reports about the fate of Indigenous children in residential schools have shaken Canada.

St Anne's was run by the Church and was closed in 1976. It was one of the boarding schools that forcibly removed children from their Indigenous families and tried to re-educate them. But whether state or church-run, they had this in common: thousands of cases of assault and a strikingly high mortality rate. In recent years, numerous burial grounds with unmarked graves have been unearthed.

Last Sunday, Pope Francis commented on his upcoming visit during the customary Angelus noon prayer at St. Peter's Square. He called it a "journey of penance." He wanted to go to Canada "especially to meet and embrace the Indigenous people in the name of Jesus," he said.

Pope speaks of a 'journey of penance'

A "journey of penance" can also mean delivering an apology, but this trip is not so clear-cut. Pope Francis' trip seems like a journey to the Indigenous people. Of course, there will also be meetings with state representatives in Quebec. But the pope's schedule includes visits to several of the former residential schools, a flight to Iqaluit in Canada's far north, and several meetings with delegations of Indigenous people or with former residential school students.

"If he doesn't issue an apology on behalf of the Church, people will be disappointed," Korkmaz tells DW. In that case, the trip would be nothing more than a "propaganda event." But she also expects "concrete steps, concrete action. An apology, after all, just words in the end."

For example, she said, the Vatican should finally publish documents regarding residential schools that are kept by the Congregation for the Doctrine of the Faith. This would provide more precise figures, and Indigenous people could learn more about their history. "And maybe we can identify more of the unnamed children whose remains have been found in burial grounds on school properties in different areas of Canada since 2021," Korkmaz says.

Since the 1990s, the Canadian government has sought to address the fate of Indigenous children in residential schools. The Catholic Church soon followed suit. First Nation representatives visited the Vatican in 2009 and met Pope Benedict XVI, though he never made the trip to Canada himself. Pope Francis met with Indigenous delegations at the Vatican over three days in late March and early April this year. The pope concluded the visit by addressing the "reports of suffering, deprivation, discriminatory treatment and various forms of abuse" in the boarding schools.

The pope said he feels "pain and shame" for the role that "various Catholics" have played in this tragedy. He asked God's forgiveness "for the deplorable behavior of these members of the Catholic Church." And he wanted to "say from my heart, I am very sorry."

But that is too little too late for many people like Evelyn Korkmaz. They expect an apology that speaks to the responsibility of the entire church as a system, not one that simply addresses the failings of individual Catholics.

How Pope Francis interacts with Canada's Indigenous people and his concern for them is characteristic of his pontificate, which began in 2013. The current trip also illustrates a departure from his predecessor. For Pope Francis, engagement with people on the margins of society is a central part of his agenda. During his first years in office, this included occasional visits to poor Roma settlements on the outskirts of the Italian capital, and he values these encounters during his trips abroad.

Most recently, health issues forced the 85-year-old to cancel three trips abroad, which were supposed to take him to Lebanon, Congo and South Sudan. For many weeks, photos showed the pope in a wheelchair — due to pain in one of his knees. His itinerary in Canada is also more open than the timetable of earlier papal journeys. He lands in Edmonton from Rome on Sunday around noon local time, and after a short greeting at the airport, has no further appointments.

Evelyn Korkmaz, who lives in Ottawa, launched an initiative to help former students of church institutions and victims of clergy abuse cope with trauma. Internationally, she is a co-founder of the Ending Clergy Abuse initiative. She demands that clergy and church members who commit abuse be consistently reported, that they are not simply transferred out to other congregations, and that their acts are not covered up.

Her expectations ahead of the pope's Canadian trip go beyond her home country and issues of abuse. She hopes Pope Francis will rethink church doctrinal statements about "discovering" regions in the Americas, Africa and Asia. "After all, in many cases, they have simply taken our land, Indigenous land, and labeled us pagans." But the land of Indigenous people does not belong to anyone else, anywhere in the world.

Her goal is to break the cycle. On the Ending Clergy Abuse website, the latest publication looks to a different region and is titled "Power, abuse and cover-up in New Zealand schools." The involvement of the Society of Mary, a Catholic order, is also denounced.