Advertisement
Home / World / PM Modi was 'terrific' in allowing export of hydroxychloroquine to US: Trump

PM Modi was 'terrific' in allowing export of hydroxychloroquine to US: Trump 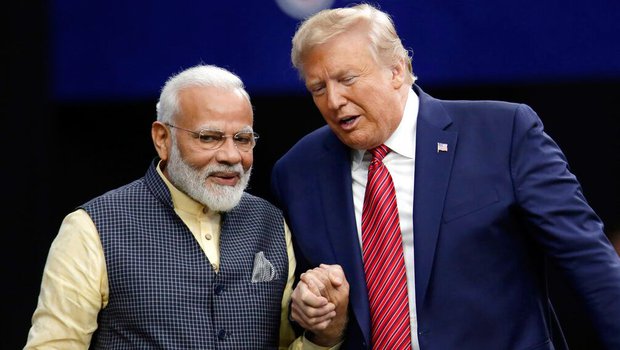 "Extraordinary times require even closer cooperation between friends. Thank you India and the Indian people for the decision on HCQ. Will not be forgotten!" US President Donald Trump tweeted
(File picture)
PTI   |   Washington   |   Published 09.04.20, 06:45 AM

US President Donald Trump has described Prime Minister Narendra Modi as 'terrific' for allowing the export of the anti-malarial drug hydroxychloroquine to the US, seen as a possible cure for Covid-19, saying India's help in the extraordinary times 'will not be forgotten'.

India, the largest producer of hydroxychloroquine, agreed to lift the ban on the export of the medicine to the US after Trump spoke to Modi on phone last week. Three Gujarat-based companies would export these tablets to the US, Gujarat chief minister Vijay Rupani said on Tuesday.

'I want to thank Prime Minister Modi of India for allowing us to have what we requested for the problem that arose and he was terrific. We will remember it,' Trump told reporters at his daily White House news conference on coronavirus on Wednesday.

In a tweet hours earlier, Trump praised Modi for his strong leadership and said that India's help during this crisis will not be forgotten.

'Extraordinary times require even closer cooperation between friends. Thank you India and the Indian people for the decision on HCQ. Will not be forgotten!' he said.

'Thank you, Prime Minister for your strong leadership in helping not just India, but humanity, in this fight!' Trump said in his tweet that went viral and was re-tweeted more than 60,000 times and liked by over two lakh people.

Extraordinary times require even closer cooperation between friends. Thank you India and the Indian people for the decision on HCQ. Will not be forgotten! Thank you Prime Minister @NarendraModi for your strong leadership in helping not just India, but humanity, in this fight!

By Wednesday night, more than 14,600 Americans lost their lives due to the coronavirus and over 4.3 lakhs have tested positive for the dreaded disease.

Scientists and the medical fraternity are racing against time to find a vaccine and a therapeutic solution to the infection that originated in the central Chinese city of Wuhan in December.

Hydroxychloroquine has been identified by the US Food and Drug Administration as a possible treatment for the Covid-19 and it is being tested on more than 1,500 coronavirus patients in New York.

Anticipating that it will work, given initial positive results, Trump has bought more than 29 million doses of hydroxychloroquine for potential treatment of COVID-19 patients.

India manufactures 70 per cent of the world's supply of hydroxychloroquine, according to Indian Pharmaceutical Alliance (IPA) secretary-general Sudarshan Jain.

The country has a production capacity of 40 tonnes of hydroxychloroquine (HCQ) every month, implying 20 crore tablets of 200 mg each. And since the drug is also used for auto-immune diseases like rheumatoid arthritis and lupus, manufacturers have good production capacities that can also be ramped up.

The Indian-Americans have welcomed the decision of the Indian government to allow the export of HCQ.

'President Trump is graceful and grateful. He is honest when he says that he will not forget India's gesture. He is a true friend of India,' said Al Mason, a Trump supporter.

'Thank you President! I think you are well orchestrating the compulsion of history and demand of destiny that we and India be the best of friends, joined at the hip and yet as family, free hearts and minds to love across a spectrum of emotions, but always together,' tweeted Indian-American attorney Ravi Batra.

According to Johns Hopkins University date, 88,538 people have died due to coronavirus and nearly 1.5 million people have been infected. The US has the highest number of infections in the world at 431,838, followed by Spain (148,220)and Italy 139,422.