Pakistan flood: Govt to deploy Army to assist in rescue and relief work 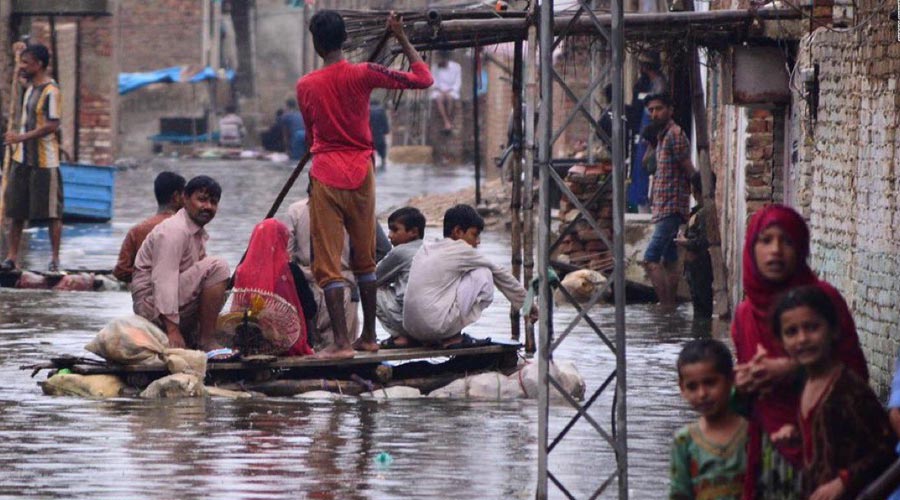 The Pakistan government has decided to call in the Army to help in the rescue and relief operations after many parts of the country were ravaged by the worst floods in more than a decade that has affected more than 33 million people, Interior Minister Rana Sanaullah said on Saturday.

So far 982 people have been killed due to floods across Pakistan. As many as 45 persons died in the last 24 hours, according to the National Disaster Management Authority (NDMA).

Interior Minister Sanaullah said the armed forces were being deployed in the wake of the biggest floods in more than a decade.

He said the troops have been called in under Article 245 of the Constitution which empowers the government to summon the Army in aid of the civilian administration to deal with an emergency.

A formal notification issued on Friday read that the exact number of troops and area of deployment would be worked out by respective provincial governments in consultation with the military operations directorate and General Headquarters.

The date of de-requisitioning of said deployment will be decided subsequently after mutual consultation among all stakeholders, according to the notification.

The calamity has badly hit the infrastructure of the country with the NDMA reporting that more than 3,161 kilometres of road were damaged and 149 bridges swept away, while 682,139 houses were totally or partially damaged in the floods.

Floods triggered by unprecedented monsoon rains have submerged more than half of the country, leaving more than 5.7 million without shelter and food in 110 districts.

According to Minister for Environment Sherry Rehman, the country normally witnesses about three to four spells of torrential rains every year.

However, Pakistan has this year so far been hit by eight monsoon spells and more downpour is expected.

The NDMA data shows that during the last 30 years the average rainfall in the monsoon season was 132.3 mm while so far 385.4 mm of rains have been recorded since June 14 -- about 192 per cent more than the previous three decades.

Prime Minister Shehbaz Sharif in a meeting with a select group of Islamabad-based Ambassadors, High Commissioners, and other senior members of the diplomatic corps ambassador on Friday briefed on the flood situation in the country.

He said that as per the initial damage assessment, the losses caused by the floods were comparable to those Pakistan suffered during the flash floods of 2010-11.

The meeting was attended by Ambassadors and High Commissioners of Australia, Canada, China, Japan, Kuwait, UAE, Turkiye, South Korea, the US, Germany, and senior diplomats of Bahrain, the European Union, France, Oman, Qatar, the UK, and Saudi Arabia.

The Country Representative of the World Food Programme (WFP) was also present at the meeting, according to the Foreign Office.

The Prime Minister said that more than 33 million people had been badly affected by the flash floods and torrential rainfalls.

He said that Pakistan's carbon emission footprint was negligible but it was ranked at the 8th position among the countries exposed to the horrors of climate change.

Noting that climate change has made flooding worse, the Prime Minister emphasised rehabilitation and reconstruction of climate-resilient infrastructure in Pakistan.

Sharif said that given the urgency of the challenge, the government had decided to reach out to friendly countries, donors, and international financial institutions for their continued cooperation at this difficult hour.

He said that the Foreign Office and the NDMA were closely coordinating with the United Nations Resident Coordinator in Islamabad to launch a UN Flash Appeal on August 30.

Speaking on the occasion, foreign diplomats expressed condolences and sympathies to the people and the government on the loss of precious lives and damage to infrastructure in the floods.

They assured the government of their country's continued support to meet the requirements of the rescue and relief operations across Pakistan.